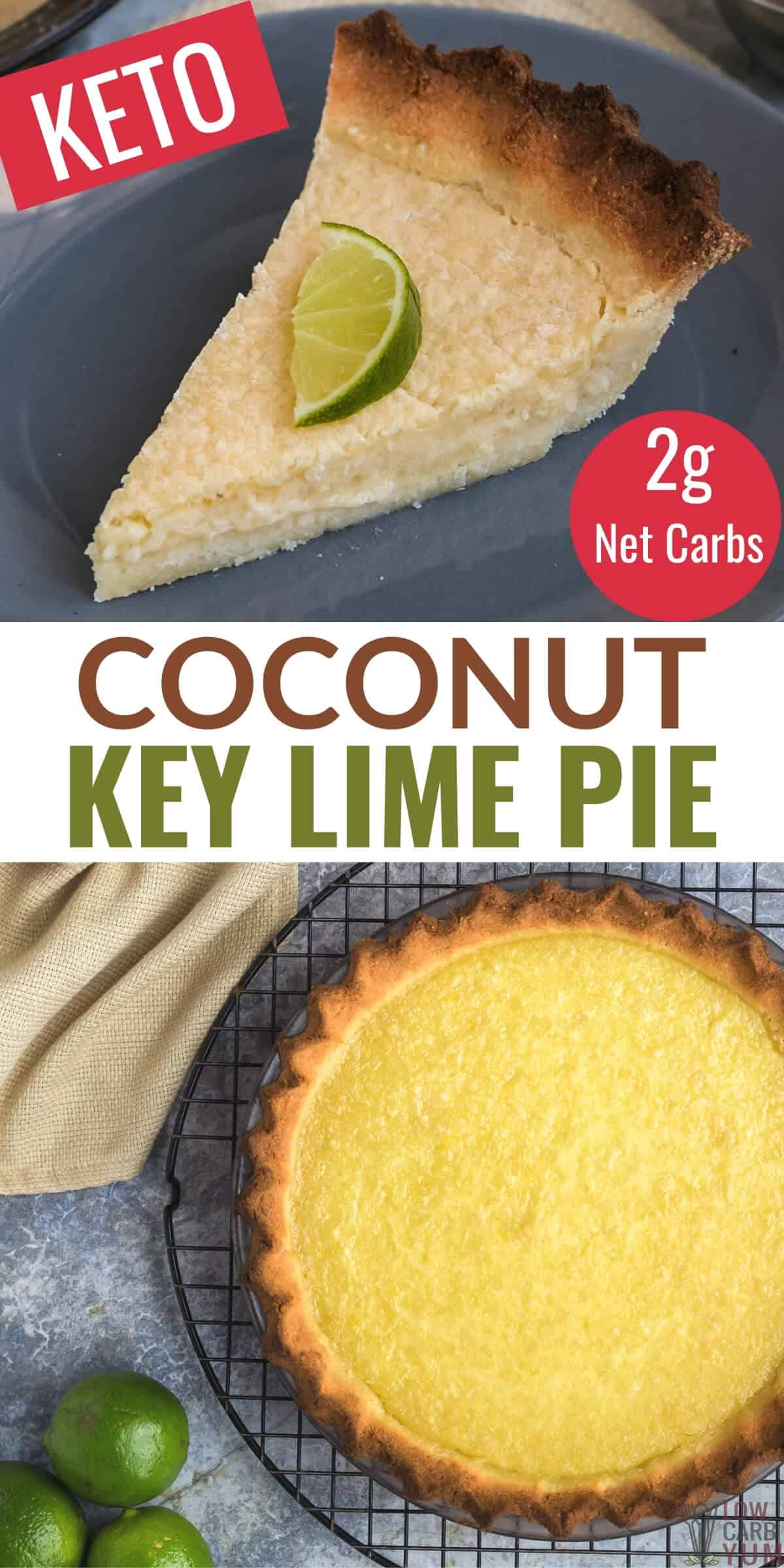 This year, I made a new low-carb pie to share at a small holiday family gathering. Instead of the more traditional desserts, I wanted to change it up by offering something more tropical.

I also retested an old pie crust made with both almond flour and coconut flour. Using both keto-friendly flours results in a light and flaky texture.

This tangy coconut key lime pie is not comparable to a regular one made with condensed sweetened milk. It's also much different than my key lime pie with cream cheese which comes with a cream cheese based crust and filling.

You'll find this is more like a coconut custard pie with a lime twist! It's always a favorite at Easter along with ricotta cheese pie. The filling is also thicker and richer than my key lime cheesecake in jars.

The recipe for the crust is an adaptation of a coconut flour one from the Bruce Fife Cookbook. I added some sweetener to since it's being used for a sweet pie.

The crust is made with a blend of melted butter, low-carb flours, eggs, sweetener, and salt. Although I pre-baked it first, that shouldn't be needed.

I used a blend of coconut milk and heavy cream in the filling. But if you'd like the pie to be dairy-free, coconut cream can be used in place of the cream.

The filling is not overly sweet. I used xanthan and guar gum to firm up the custard. Additional egg yolks might work as well.

The base ingredients are combined first in a food processor or blender. Then the dried shredded coconut is stirred in.

Once it's poured into the prepared crust, it's baked at 400°F until set. Because of the added xanthan gum, it should set after baking. The baking is needed to cook the egg yolks.

I prefer using a liquid monkfruit in the filling because a monkfruit and erythritol blend tends to crystallize. You can also use stevia liquid extract as well.

To prevent burning the edges of the pie crust, use a pie shield or some aluminum foil to cover it while baking. Although I pre-baked the crust, that should not be needed since the filling is being baked.

A meringue topping can be added as the coconut key lime pie filling with coconut milk is similar to what you'd get in a keto lemon meringue pie.

The custard can be topped with a stabilized whipped cream made with heavy cream or coconut cream after cooled. Or, try piping on mounds of key lime mousse!

Some toasted coconut would be an excellent addition to sprinkle on top.

Looking for more keto pies for holiday desserts? Take a look at some of these popular recipes: 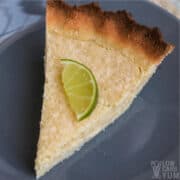 It's recommended to use a non-erythritol sweetener in the pie. Using a granular sweetener with erythritol can cause the filling to be gritty as the erythritol can crystallize. Using ¼ teaspoon monk fruit (or stevia) liquid sweetener and ¼ granular sweetener should be okay as the lower amount of erythritol shouldn't crystallize. The pie crust most likely doesn't need to be baked separately. The recipe should work by filling the unbaked crust and then baking the pie for 20 to 30 minutes. It's recommended to use a pie shield or foil to prevent burning the edges of the crust when baking.