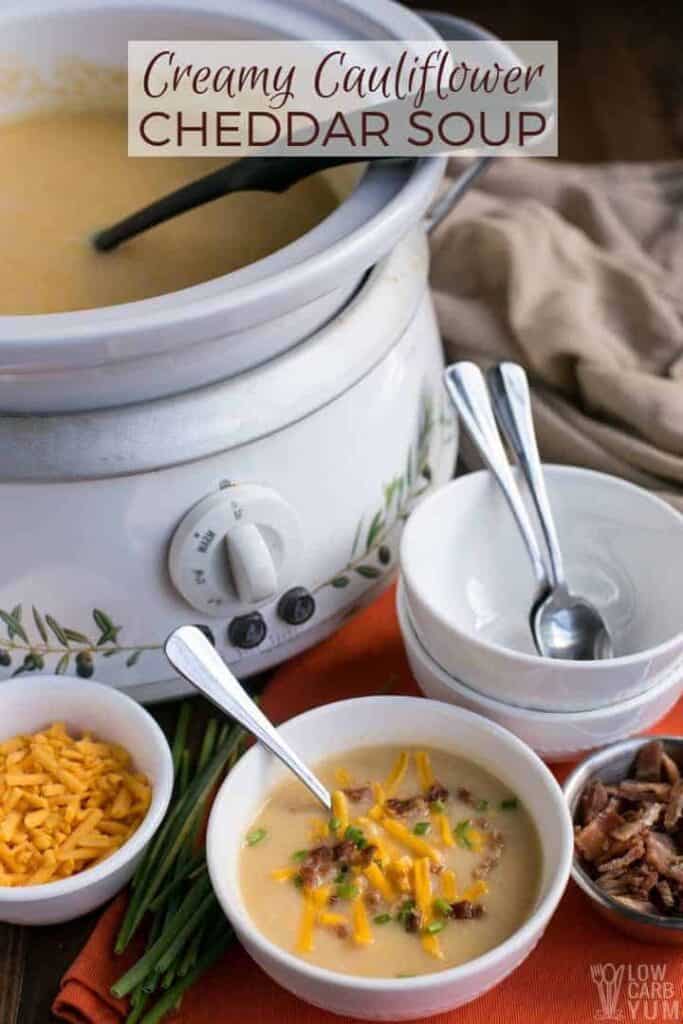 A creamy cauliflower cheddar soup recipe that requires little prep time and cooks up right in the slow cooker. And it's low carb and keto friendly.

Disclaimer: This post has been sponsored by Vital Proteins, but all opinions are my own.

I'm always looking for ways to make cooking quick and easy. And that's one of the things I love about using the slow cooker. However, I don't have nearly enough recipes as I should so I plan to work on more low carb crock pot recipes.

With so many appliances to choose from, the slow cooker is still my favorite because it's the one you can just set and forget about for several hours. That allows me to do other things instead of having to listen for a beeper to go off when time is done.

I had all the ingredients to make a cauliflower cheddar soup but was a little short on bone broth. However, had a container of Vital Proteins Beef Bone Broth Collagen on hand. It's a great ingredient to use if broth is called for in a recipe.

Although  I could have replaced all of the bone broth with the instant flakes and water, I had some homemade broth to use up. But the recipe will turn out  just as good if you replace the 1 cup of broth with 1 cup of water and a scoop of the Vital Proteins Bone Broth Collagen.

Why use an instant bone broth powder?

I don't always have the time to make my own bone broth so I love keeping some of the instant collagen broth on hand to use instead. And it's a great product to mix into hot water or tea for a boost of collagen, vitamins, and minerals.

What I love about this instant bone broth powder is that it's organic, MSG free, Whole30 approved, and low in sodium. And the beef is grass-fed and pasture-raised. What more could you ask for in a bone broth product?

I've also found that adding collagen into my daily routine not only helps with digestion, but it makes my nails stronger and my skin glow. I'm almost fifty, but you'd never know that by looking at my skin.

And when you add the broth powder to tea, it dissolves right in and has no taste. So you don't even know it's there!

How to make cauliflower cheese soup in a slow cooker

This recipe for cauliflower cheddar soup is so easy that you are sure to make it often. And, the prep time should take no more than five minutes.

First, you'll want to gather all the ingredients. I use a head of cauliflower, a small onion, low carb milk (either unsweetened almond or coconut in a carton), instant bone broth, water, Dijon mustard, and cheddar cheese. You may also want some fresh chives and crisp cooked bacon to use as garnish. And some of the instant bone broth can be subbed with homemade bone broth.

The cauliflower is broken up into florets and added into a crock pot along with the chopped onion, low carb milk, bone broth, and water. (photos 1-4) The slow cooker is then set on low to cook for 3-4 hours to soften up the cauliflower and onions.

Once the time is up (photo 5), the mixture is pureed using a high speed blender (photo 6). Then the puree is poured back into the slow cooker with the heat still on low (photo 7). The majority of the cheese is added, reserving some for garnish, along with the mustard (photo 8). The soup is then allowed to heat until the cheese has melted (photo 9).

At this point, the soup is ready to serve and enjoy!

When to serve this cauliflower cheddar soup

This cheesy cauliflower soup is simple enough to serve for every day meals. And it freezes well if you want to make up a large batch and save it for a quick meal later.

But, the soup also makes a great appetizer at holiday dinners and other special occasions. I love that it can be made ahead and just reheated in the slow cooker to serve. It can also be easily made the same day and kept warm in the slow cooker.

If you have a container of Vital Proteins bone broth powder, it can be used to make the following low carb soup too!

Have you used instant bone broth powder in soup recipes in place of homemade broth? How did it work out for you?

Enjoy the easy and delicious slow cooker soup recipe! It's a simple keto soup that's is sure to become a family favorite. Be sure to let us know what you  of the soup in the comment section below if you do give it a try. 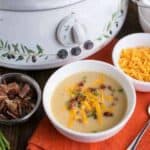