A delicious low-carb gluten-free cherry cobbler made fresh cherries and no added sugar. Enjoy it with some sugar-free ice cream or just eat it plain!

It has been about a month since my last post. The reason is that I have either been eating out or making a quick salad or sandwich at home.

I was away for almost two weeks on a business trip and I found it very hard to resist all the temptations at the restaurants.

Although I did give in on several occasions, I am ready to get back on the right track so I made this low carb gluten free cherry cobbler.

I stayed in Roanoke, Virginia, during my trip last month. It is a small city in a valley of the Blue Ridge Mountains in the southwestern part of the state.

The weather was beautiful, except for one very intense thunderstorm the day after I arrived. For my last dinner there, I drove to a highly recommended country food restaurant that served family style Southern dishes.

The place we visited was a large farmhouse nestled in the mountains that had been converted into a restaurant. They are well known for their fried chicken, but also serve roast beef, ham and BBQ pulled pork along with a variety of side dishes.

The dessert is typically a fruit cobbler. I visited on a Thursday which is the only night they serve the BBQ pork and the dessert was a delicious cherry cobbler topped with vanilla ice cream.

So, it is no surprise I set out to develop a low carb gluten free cherry cobbler now that I am back home. For those interested in checking out the restaurant, it's called The Home Place and you can learn about them on their Facebook page.

A bad storm hit the area the day after I left and it mentions that the restaurant lost power along with hundreds of thousands of other folks in the area. Thankfully, we made it out before that storm hit.

How to make a Gluten Free Cherry Cobbler

Enough about me and my trip and on with the recipe!

To start, I whisked an egg with heavy cream and sour cream then set the bowl aside to have ready. (photos 1-3)

Then, I combined almond flour, coconut flour, pecans, oat fiber (you can use more almond flour instead), low carb sweetener, and cinnamon in a food processor until the nuts were well ground. (photos 4-8)

Next, I added the heavy cream mixture to the flour mixture in the food processor (photo 9) and pulsed until a dough was formed (photo 10).

I removed the dough from the food processor and shaped it into a ball and chilled it for an hour or two. (photo 11)

While the dough was chilling in the refrigerator, I worked on the filling. It's simply a mixture of tart cherries with low carb sweetener, almond extract, and cinnamon which I combined in a medium bowl. (photos 13-15)

Then, I poured the cherry mixture into an 8x8-inch glass baking pan. (photo 16)

When the dough was cold enough to work with, I flattened it out on the plate (photo 12) and divided it into 8 pieces. Next, I formed 8 flat disks of dough on a parchment paper.

Notes on the recipe

Although I wanted a gluten free cherry cobbler, I discovered that not all oat fiber is certified to be free of gluten. So check the package to see if it is.

Therefore, I tested the recipe using additional almond flour instead and it works just as well. Or, you can add in some ground flax instead.

Also, due to the fructose, there are more carbs in cherries than traditional low carb fruits like berries. So this isn't a dessert you'd want to eat too often.

However, I don't see any issue with enjoying this treat when cherries are in season and they are the tart ones.  As with any dessert, you'll just want to enjoy it in moderation and keep the portion small since cherries do have more sugar.

The net carbs for a serving of this gluten free cherry cobbler is about 8 grams if you divide it into 9 equal pieces. If you find that's too high for your eating plan, you can try the keto-friendly strawberry rhubarb crisp or gluten free rhubarb crumble recipe.

Or give my low carb blueberry cobbler or my paleo berry cobbler a try using any low sugar berries! And, I find the best way to serve cobbler is to top it off with some keto ice cream or whipped cream. 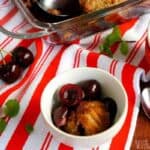