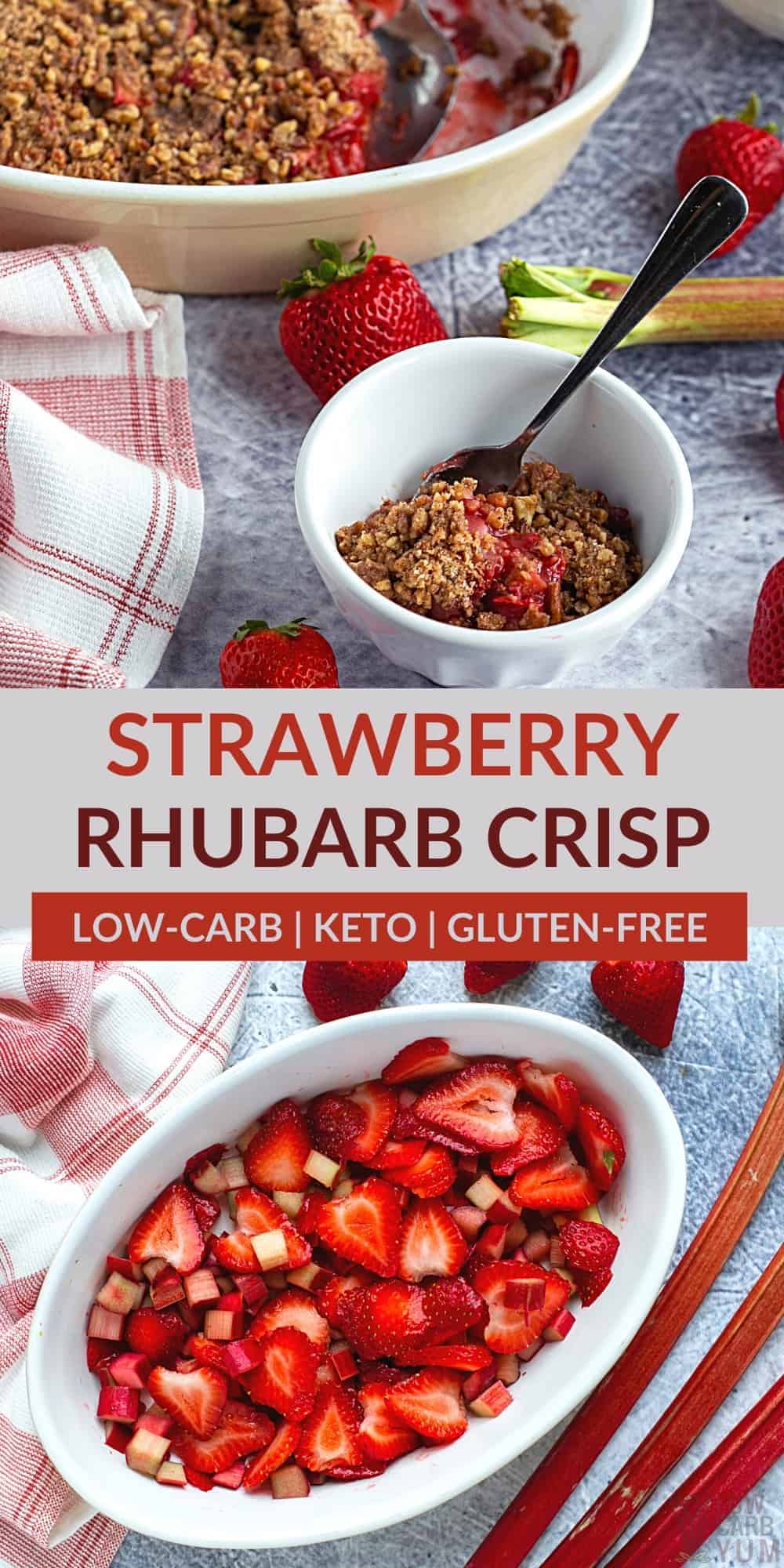 Gluten free strawberry rhubarb crisp is a healthier remake of the classic dessert for late spring into summer. It’s an easy keto friendly rhubarb recipe that doesn’t take much effort to prepare.

Although we did not grow any rhubarb this year, I’ve been craving some of the tart plant. So I picked some up at a local market along with some organic strawberries to use in an easy rhubarb crisp.

I thought about making a low carb pie, but wanted something that would be quick to make. Fruit crisps are so simple that it wasn’t difficult to come up with a recipe. It only took about ten minutes to prepare and less than a half hour to bake.

That’s why I came up with this easy gluten free strawberry rhubarb crisp recipe. It combines two of the best low carb fruits of summer into a delicious dessert that’s perfect for sharing.

How to make a strawberry rhubarb crisp

I just love the sweet and tart taste of strawberry rhubarb filling. The mixture is just strawberry and rhubarb with some low carb sweetener and a little xanthan gum added as a thickener.

The best part is that you can mix the filling right in the baking dish so you don't have to dirty an additional bowl. Unfortunately, you'll want to mix up the topping ingredients first before adding them to baking dish.

I topped off the filling for this easy strawberry rhubarb crisp with a pecan crumb mixture. The original recipe used oat fiber but it's tough to find gluten free oats. So I changed the recipe to use a blend of almond flour and coconut flour instead.

This crumb topping works well with any fruit filling. The topping would be perfect for a zucchini crisp or mock low carb apple pie. Really, any cooked low carb fruit mix can be topped off with this nutty mix.

Once assembled, you bake the crisp in a 350°F oven until the filling is bubbling and the topping has browned. So be sure to preheat the oven before starting the preparation steps.

Should the gluten free strawberry rhubarb crisp be refrigerated?

Can you freeze it?

If you don’t want to over-indulge, I’d recommend freezing any extra servings for later. You can even make a double or triple batch to have a good amount stashed away for any rhubarb cravings you may have.

Since the carbs in rhubarb are only about 6 grams per cup with over 2 grams of fiber, it's definitely a keto friendly ingredient. But what other things can you do with it? Check out the following gluten free low carb recipes for other ideas:

I've been wanting to try the upside down cake by Simply So Healthy. Hopefully, I'll get a chance to test that one out this summer to share with family and friends.

Enjoy this simple keto dessert featuring rhubarb and strawberry! And be sure to let me know how it turned out in the comment section below. 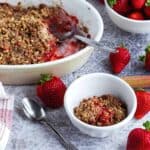