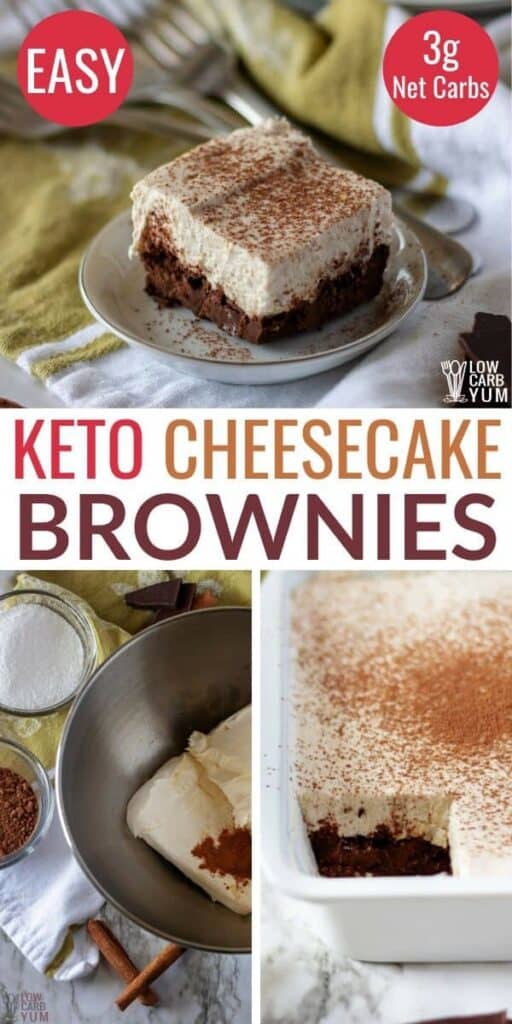 What could be better than combining two decadent desserts in these keto cheesecake brownies? With just 3 net carbs per serving, these cream cheese brownie bars are a great way to satisfy your sweet tooth on a keto diet.

Is there anything more indulgent than combining two desserts into one decadent treat? Sure, simple desserts can be just as lovely as elaborate ones. I get it.

But sometimes, you need a dessert that feels like a celebration with every bite, you know? That’s why I decided to bring together rich, fudgy brownies and creamy, tangy cheesecake into one incredible treat!

These bars are out-of-this-world delicious. The flavors compliment each other perfectly with just the right balance of sweet cream and slightly bitter dark chocolate.

And to top it all off, these little bites of heaven are only 3 net carbs each. And there’s no flour of any kind in the recipe.

That’s right. Indulgent, guilt-free, and combining the best of both worlds with two of the most popular desserts out there.

So the next time you need a dessert for a special occasion, or you’re just in the mood for something extra, a keto cheesecake brownie may be just what you need.

This is about to become one of your favorite desserts! There are two parts to it - the gluten-free brownies and the light and fluffy cheesecake.

Here are the ingredients I used to make rich keto brownies. When you are trying decide which sugar substitute to use, follow this keto sweetener guide.

I made a basic cheesecake layer. Here's what I used in it.

First, we’ll whip up a batch of flourless brownies. Next, we’ll prepare the cheesecake topping. Then after your brownie layer has cooled, it’s time to assemble!

This is the tastiest brownie batter you have ever made. The best part is that this brownie recipe is super-simple and low-carb. Even if you just make the brownie recipe, you'll love it by itself.

This cheesecake mixture is high-fat and high-protein. The cheesecake batter is rich, smooth, and has the most incredible flavors.

I love that dark chocolate contains powerful antioxidants. So not only are keto cream cheese brownies guilt-free, but they even provide a little health boost! Win-win.

Dark chocolate is not quite as sweet as milk chocolate. I find the longer I eat low sugar and low carb, the less sweetness I need in my treats.

Dark chocolate provides just the right amount of chocolate flavor without being overly sweet. It’s deliciously rich, just what I want from a fudgy brownie.

The cheesecake layer is also quite sweet, which balances the dark chocolate brownie layer. Together, I think the sweetness is just right.

The combination of dense, fudgy brownie with light and sweet cheesecake is truly decadent. When I’m craving something sweet, it’s the kind of satisfying treat I love!

Seriously, who can resist topping a keto brownie with cheesecake?

When baking for my family or friends, I’ll even sprinkle a little unsweetened cocoa powder on top. I think the end result looks almost as great as it tastes.

Next time you need a treat for a special occasion, or just want to treat yourself, you have to try these keto cheesecake brownies.

Serve this with a cup of bulletproof coffee or your favorite sugar-free latte.

There a lot of different ways to make a baked brownie topped with cheesecake. Here are a few of my favorite variations.

Here are some questions people often ask about how to make keto brownie bottom cheesecake. If you don't see your question in this list, please leave it in the comments.

How many net carbs are in each brownie?

When I bake this recipe, I cut it into 16 brownie cheesecake bars.
At this size, each square will have 4 grams of carbohydrates and 1 gram of fiber. So each serving will contain 3 net carbs.

Compare that to commercial cheesecake brownie squares, which can contain anywhere between 30 and 55 net carbs! I can only imagine the sugar crash.

These keto cheesecake brownies are the perfect treat when you want to indulge guilt-free.

How do you store leftover creamy cheesecake brownies?

If you made this in a springform pan, cover it in aluminum foil or plastic wrap and refrigerate it for up to three days. Or store it in another airtight container for the same amount of time.

Can you use brownie mix instead?

As long as the brownie mix is low-carb and keto-friendly, that can be a really fantastic way to save some time.

You’ll find all kinds of desserts on this blog, from easy chocolate fudge to fancy tiramisu. Looking for other low carb and keto friendly treats? Indulge in a few of these favorites: 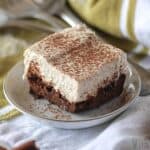 If needed, strain the filling before transferring it to the cooled brownies. Be sure to let the dessert chill for at least 4 hours so the cheesecake can set before serving. Use a chilled bowl to speed up the process of whipping the heavy cream.