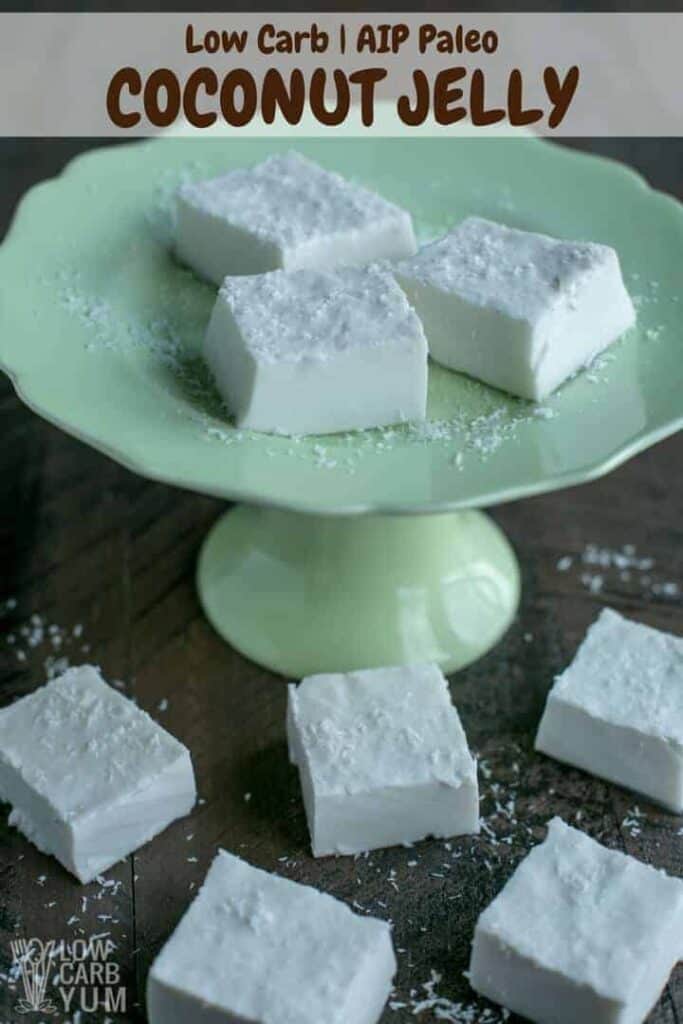 An AIP paleo coconut treat made with gelatin and coconut cream. With only 3 simple ingredients, coconut jelly is sure to become a regular.

Early into my AIP diet, I needed a little something that would feel like a treat. However, there aren’t many choices for sweeteners while on an autoimmune protocol.

Since I’ve been a long time low carber, I wasn’t about to ruin that by adding in high carb natural sweeteners. I ended up doing The Meyers Way which allows stevia to be used.

I’ve never had issues with stevia, so I added some coconut stevia drops to up the flavor. That added just the right amount of sweetness to the coconut jelly and enhanced the flavor.

It’s said that stevia, even the powdered dry green leaves, may wreak havoc on hormones. Perhaps if you consume too much of it, but a little here and there shouldn’t be an issue.

To be safe, I avoided sweeteners of any kind while on my elimination diet. Instead, I’d just grab a handful of berries to sweeten my dairy free coconut yogurt or as a little snack.

It’s a good thing I like coconut because I ate a lot of it during my elimination phase. I’m at the 30 day mark now and I’m ready to start testing foods again.

I already know I have an egg white sensitivity, so I’ll continue to avoid them. But, egg yolks are very nutrient dense and don’t bother me so I’m looking forward to testing out a new custard recipe with coconut milk.

In addition to these bite sized coconut jelly treats, I also snacked on coconut wraps. They were like fruit roll-ups to me. I didn’t even bother using them to make a sandwich.

To keep myself well stocked with coconut cream, coconut milk, and coconut wraps, I’ve been shopping at Thrive Market. I also like to stock up on bone broth from Thrive.

If you do a lot of shopping, the yearly membership fee is well worth the cost. It’s like a wholesale market for natural and organic foods. And, their prices are often better than Amazon.

The coconut cream I used in the coconut jelly is the Let’s Do Organic brand which doesn’t contain any guar gum. The gum is made from a seed which is avoided on AIP so I didn’t want it to interfere with the elimination.

Now that I’ve finished the elimination diet, I’ve started to reintroduce foods into my diet. Tomato is the first food that I tried and so far I haven’t had any obvious symptoms.

Although I did the AIP diet to calm down my immune system, an added benefit was that I lost six pounds without trying. I think those lingering pounds were sticking around because of food induced inflammation.

Today’s dairy has been shown to be very inflammatory so I doubt I’ll ever reintroduce it back into my diet. I do love cheese so I might see how I do with goat and sheep milk.

For those of you struggling with losing weight, I encourage you to give an elimination diet a try. It was a lot easier than I thought it would be. And it made me realize that I don’t need eggs, dairy, nuts, or seeds.

Despite the bad photos, I hope you give this coconut cream gelatin recipe a try. It’s an easy dairy free treat that’s quick and easy to make. 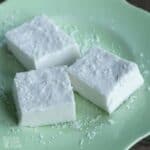