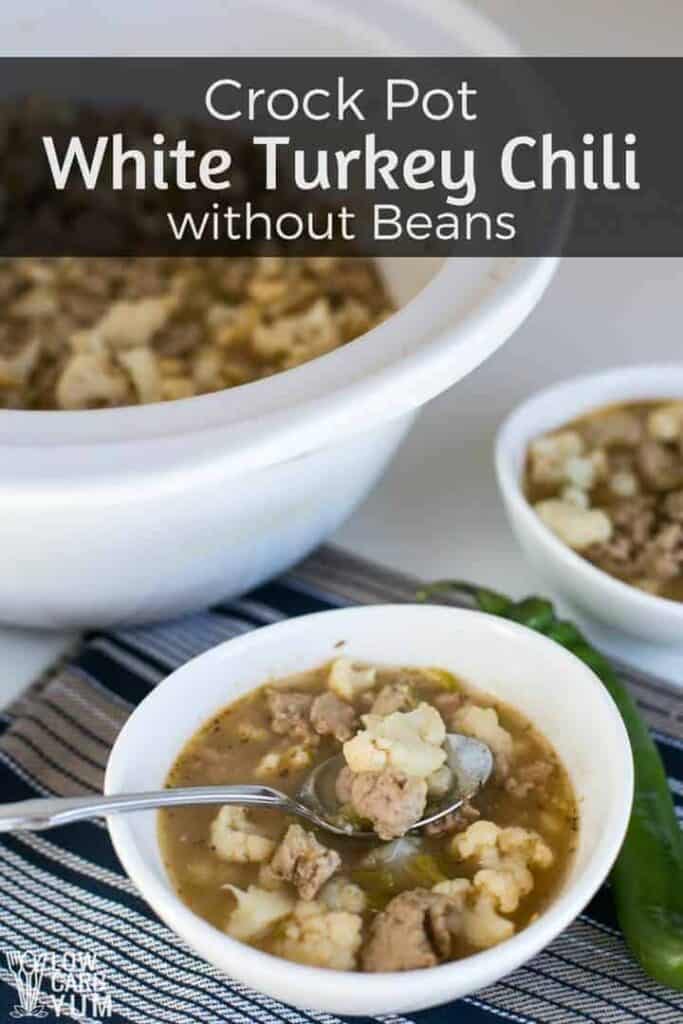 A healthy recipe for crock pot white turkey chili without beans that's low-carb and full of flavor. It's dairy-free, but cheese or sour cream could be added on top if desired.

I've been doing pretty well avoiding dairy. But, since dairy is keto friendly, I still include recipes like my keto cinnamon rolls on the site.

I'm not sensitive to milk products, but I try not to eat them because they are so inflammatory. And, I have a couple autoimmune conditions where it's best to stick stay away from foods that cause inflammation.

Other than the pepper seasonings, this crock pot white turkey chili without beans is made with low inflammatory foods. Pepper is a nightshade which tends to aggravate any inflammation in the body.

Peppers are an essential spice for chili. But if you're on an autoimmune protocol eating plan, you could try to use an anti-inflammatory taco seasoning.

Of course, subbing out the peppers would make this more like a ground turkey soup rather than chili. I'm sure it would still be tasty, though.

The thing I love most about this recipe is that it's so easy to prepare. And, if you keep pre-cooked ground turkey or chicken on hand in the freezer, the prep is even easier.

I like to keep pre-cooked ground meat on hand just for making slow cooker recipes. However, I didn't have any frozen cooked ground turkey when I was getting ready to make this crock pot white turkey chili without beans.

Another turkey meat chili that I like to make is slow cooker pumpkin chili. The nice thing is that the pumpkin puree thickens up the chili as well as adding in some flavor.

I like to add pumpkin into low carb soups to use as a thickener. It also adds in some nutrients like vitamin A. I'm always looking for ways to add vegetables into my dishes.

Speaking of veggies, I used pieces of cauliflower in this crock pot white turkey chili without beans. I could have pureed the cauliflower to thicken up the chili instead like I did with my white chicken chili recipe.

I've been thinking of using cauliflower in chili as a bean substitute for a while. Next time, I may try a combination of pureed cauliflower along with the small pieces.

Although I really love the pressure cooker, I'm loving the slow cooker more. If I'm in a hurry, the Instant Pot is definitely a better choice, but slow cooking is more forgiving.

You could certainly adjust this crock pot white turkey chili without beans recipe to be made in the Instant Pot. But, you'd have to be careful not to overcook the cauliflower.

I added in the vegetable during the last hour of cooking in the slow cooker so it didn't turn to mush. With a pressure cooker, you have to relieve pressure before adding additional ingredients which I find to be a pain.

The cauliflower was perfectly cooked at the end. It was still a bit firm but soft enough to bite into without any issues. And, I could have chopped it up a little smaller.

Chili is typically thicker than soup. So I'm thinking I may add in a little pumpkin puree to thicken this crock pot white chicken chili without beans next time.

If you are trying to keep carbs really low, it's better to puree half of the cauliflower rather than use pumpkin. Adding in pumpkin puree will up the carb count for the chili.

I don't usually eat a lot of ground turkey, but I've been experimenting with it more these days. We have a freezer full of ground venison so that's what I should be eating.

However, I don't like to eat the same thing all the time so I try to change it up regularly. I do rely on cauliflower a lot, though, because it's such a great sub for high carb ingredients.

Since chili usually has chopped peppers in it, I added in two pablano peppers that were cut into small pieces. But, any chili pepper will do, even the canned variety.

And, the ground turkey can be subbed with ground chicken. That would just make this a white chicken chili recipe instead. I used an 85% lean meat because it was the one with the most fat.

Since there's only 4 grams of fat per serving, the chili can be topped with sour cream or cheese to add some fat. Or, for those eating dairy-free, coconut oil could be added in. 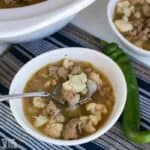 For a thicker chili, you can add in some pumpkin puree, but it will up the carb count.