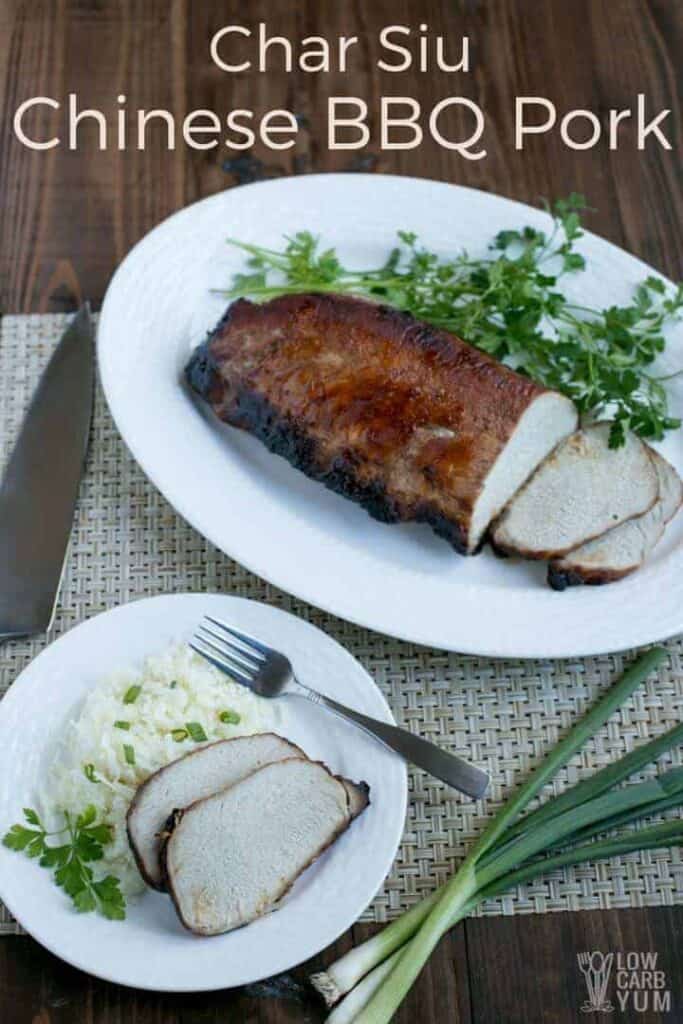 A healthier low-carb keto char siu Chinese BBQ pork recipe that's made without added sugar. It's a much better option to the high carb take-out and is perfect for adding to fried cauliflower rice.

My family likes to eat out regularly at a local Chinese restaurant. I always keep my meals plain with hot tea, sashimi, soup, and a salad. Occasionally, I'll order a low carb stir fry.

But, my husband really likes the roasted pork fried rice. And, he loves the sweet sticky sauce on the meat which I find way too sweet. However, I used to really enjoy it as an appetizer back in my high carb days.

First off, I made an Asian style barbecue marinade. Rather than use soy sauce, I made it with coconut aminos instead.

A lot of soy sauce adds wheat so I avoid it. But, it's easy to buy tamari which is a gluten free version of soy sauce. I did read the label on the soy sauce at the restaurant and it doesn't list any wheat products.

Although the food is delicious at the Chinese restaurant, that's not the only reason we go there a lot. My oldest daughter works as a hostess there and it's one of the few restaurants in the area where my youngest daughter is able to stay entertained.

To sweeten the barbecue marinade, I used a combination of stevia powder and Lakanto Golden Sweetener. I also added in a little sunflower seed butter for flavor and fat.

The pork roast I had was a tenderloin and about three pounds. I probably should have cut it into smaller pieces so more of the marinade could be absorbed into the meat.

And, I would have liked to have more edges to the char siu Chinese BBQ pork with the browned barbeque sauce. I'm also thinking a fattier piece of meat might be even more delicious.

However, this was a heritage pork roast from a Butcher Box shipment. So, it was a high quality piece to start with and turned out very tender.

My last Butcher Box shipment contained a 3 pound package of pork ribs. I'll try this barbecue marinade with the rib meat next time. But, I'll try cooking it in the slow cooker and browning it the oven at the end.

One of the seasonings for the marinade is Chinese five spice powder. If you don't have any of this, it's easy to make the spice blend using this five spice recipe.

I made a batch of my cauliflower rice recipe to serve with this char siu Chinese BBQ pork. Although pre-shredded cauliflower is easier, I like to just shred a head of organic cauliflower and cook it for five minutes in the microwave.

When I fry cooked cauliflower rice, I typically cook it in oil, then add in meat and vegetables with coconut aminos. I used to use soy sauce, but I try to avoid soy.

Scrambled egg is also added to fried cauliflower rice. It can be cooked up separately, or the rice can be pushed to the side and the egg stir fried in the same pan and then mixed in.

I don't like to cook things the same way all the time so I tend to make my low carb fried rice different each time. And, sometimes, I'll add shredded broccoli to the cauliflower.

I put together a collection of recipes using cauliflower rice. There's a lot more that can be made than keto fried rice!

I've always enjoyed eating the traditional take out Chinese foods. So, it's great to have this low carb char siu Chinese BBQ pork recipe in my collection. It goes really well with a cup of egg drop soup.

For more recipes, take a look at the low carb Chinese dishes recipe round-up that I put together at Community Table. It's amazing how easy it is to convert high carb recipes to fit this lifestyle.

Asian dishes have always been some of my favorites. So, I regularly make things like chicken and shrimp stir fry, pork stir fry, and Thai canned chicken salad recipe.

Do you miss American Chinese takeout dishes? I used to love the appetizers like egg rolls and crab rangoons. One day, I may try to mimic them with a low carb dough.

But, for now, I'll settle with the popular egg roll in a bowl and my simple stir-fry meals. I'm thinking the crab rangoons might work with a Fathead style dough. But, it will take some experimenting. 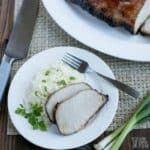