Hamburger stew is an easy recipe to make in the crock pot or on the stove top. Not only is this low carb hamburger soup keto friendly, it’s suitable for paleo and AIP too! And it’s a flavorful comfort food that’s sure to become a family favorite.

If you’re looking for an old fashioned stew, don’t skip this recipe just because there’s no diced tomatoes or potatoes. The taste will likely surprise you. My recipe for hamburger stew uses pumpkin puree and turnips instead!

In addition to having Graves’ disease, I also have a condition known as vitiligo where areas of my skin no longer tan in the summer. Both of these conditions are autoimmune diseases so I’ve been experimenting with the autoimmune protocol (AIP) eating plan.

AIP compliant foods are low inflammatory. And nightshades like potatoes and tomatoes can aggravate inflammation. That’s why they aren’t allowed on the autoimmune protocol. But potatoes are also high in carbohydrates so you won’t find them in any of my recipes.

Now that you know why I chose the non-traditional ingredients, let’s take a look at my recipe.

What you need for the recipe

First off, you can use any ground meat you like in this low carb hamburger soup. I often use a venison burger that a local butcher prepares. It’s just a ground deer meat with pork or beef fat mixed in. My husband hunts so we tend to eat a lot of venison.

Either way, to make enough for the whole family, I use two pounds of ground meat for the stew along with the following:

I use my enameled cast iron Dutch oven for this recipe. If you don’t have one, a large pot works too. And if I’m sharing the dish at a potluck, I’ll use the slow cooker method so I can keep the soup warm in a Crock Pot for hours.

How to make hamburger stew on the stove top

If you do have a Crock Pot, the meat is browned on the stove top first and then added it to the slow cooker. Alternatively, you can make a big batch of browned ground beef and keep it frozen in your freezer. This is a convenient way to make preparation of the hamburger stew crock pot method easier.

The stew can also be made by adding raw ground meat to the slow cooker. But you’ll have to break it up as it cooks which isn’t convenient.

The spinach needs to be added at the end of cooking as it cooks must faster than the other vegetables. All the other ingredients can be slow cooked for hours.

If you want to adjust the veggies, you can replace spinach with kale or cabbage. Or, add them both in. Cabbage can be added before starting to slow cook, but kale should be added at the end like spinach.

Sometimes I like to replace the red radishes with either diced daikon radish or turnips. Most people who have tried this keto hamburger soup recipe don’t even realize that I’m using mock potatoes.

You also might be wondering why I’m also adding beef bone broth for my easy hamburger stew recipe. Isn’t that overdoing it on the beef? I don’t think so.

Personally, I find that beef bone broth makes this stew heartier and more traditional tasting. You could instead use vegetable broth.

However, I think that these days, it’s so easy to find healthy, grass-fed beef bone broth. It sure is easier, and faster, than making your own.

Be sure to check out my entire collection of low carb soups and stews. Here’s a few of my personal favorites:

Enjoy this heartwarming low carb stew! And if you give it a try, let us know what you think in the comments. You may also want to try my venison chili, it’s a family favorite during the cooler months. 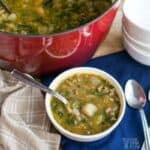 Cabbage or kale can be used in place of the spinach. Cabbage can be added in with the radishes. Kale leaves would be added at the end of cooking similar to the spinach.