An easy keto falafel recipe made without chickpeas is a delicious snack or appetizer. But it’s also a perfect addition to a low carb salad or a paleo wrap for lunch.

Recently, I was passing by a restaurant with a large sign on the window about falafels. Because I had never heard of them before, I had to look up what they are.

Falafels are small pieces of dough made with hummus or ground chickpeas that are deep fried. Since I’ve never tried them myself, I had to ask around and it sounds like they are a lot like hush puppies which are just deep fried dough balls made from a cornmeal batter.

Unfortunately, a tablespoon of chickpeas has about 43 grams of net carbs per cup according to verywellfit. Therefore, standard recipes aren’t low carb so you shouldn’t eat them on keto.

After hearing about them, I just had to create an easy falafel recipe to try them out. And, I got a couple taste testers to make sure they did indeed taste like they should.

My recipe uses simple ingredients that are all paleo friendly.

Since I like to keep things as simple as possible, my recipe is super easy to make. And I decided to make them in an air fryer so it’s less messy as well. But if you don’t have an air fryer, you can just bake them in the oven instead.

How to serve them

I think this low carb paleo falafel is delicious served as a finger food for snacking. However, dipping them into keto veggie dip or keto blue cheese dressing ups the flavor even more.

They are also great additions to the following:

Since falafel balls are so similar to hush puppies, you can serve them the same way too. That means they are perfect for serving with seafood like my tilapia salad. 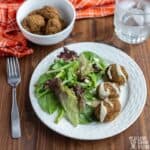 If more fat is desired, the dough balls can be deep fried which is the traditional method of cooking them. A head of cauliflower or a bunch of broccoli can be used in place of the kale.