The white New England clam chowder with the milk base is a favorite of mine. It’s usually made with a mixture of cream and milk as well as a bunch of diced potatoes. In this keto clam chowder, I use diluted cream instead of regular milk and daikon radish in place of the potatoes.

When it comes to my favorite soups, chowder in high on the list. I’ve even made a dairy free salmon chowder. However, traditional chowders tend to have a lot of starch.

How Many Carbs in Clam Chowder

According to the USDA, one cup of Campbell’s Chunky New England Clam Chowder has 22.6 grams of carbohydrates with 3 grams of fiber. That’s about 11 times more than my homemade low carb chowder containing daikon radish instead of potatoes.

One cup of daikon has about 4.3 grams effective carbs compared to one cup of potatoes which has about 31 grams. The taste and consistency of this type of radish is very similar to potatoes.

What Are Other Potato Alternatives for Low Carb Clam Chowder?

If you can’t find the daikon radish, you can use regular red radishes. Turnips are another great alternative for potatoes.

I used regular radishes in my Zuppa Toscana soup and turnips in my turkey stew. You’d never know there wasn’t potatoes in either of those.

The daikon radish in this chowder is very convincing too. I served it at a potluck and no one even questioned the ingredients.

How to Make Keto Clam Chowder

In order for daikon radish to feel like a potato in the clam chowder recipe, you’ll want to steam it until it’s very soft. It takes about 40 minutes to cook over boiling water on the stove top. But you can do it in a quarter of the time under high pressure in an Instant Pot.

While the radish is cooking, cook the chopped bacon until crisp in a large pot or Dutch oven. Then transfer the bacon to a paper towel lined plate to absorb excess grease. However, if you’re on a keto diet and need the extra fat, don’t bother absorbing the grease out.

Add celery and seasonings into the bacon fat. Cook the celery until it softens before adding in the cream, low carb milk, and clam juice. If the soup is too thin, feel free to add a low carb thickener like cream cheese, guar gum, or xanthan gum.

Once a boil is reached, add canned clams along with the prepared radish and bacon. For added color, you’ll also want to toss in some fresh parsley. When the temperature gets to a simmer, the keto chowder is ready to serve.

Notes on the Recipe

Overall, I enjoyed this New England clam chowder as much as high carb ones I've had in the past. It’s now one of my favorite low carb keto soups.

I used small whole baby clams for the recipe. But you can use larger sized ones and just chop them up. Others may want to change the seasonings a bit. If you don’t like it too spicy, you can leave out the cayenne or use only a pinch.

If you love seafood, you’ll want to try some of these other recipes. 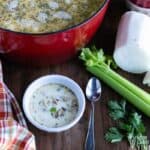