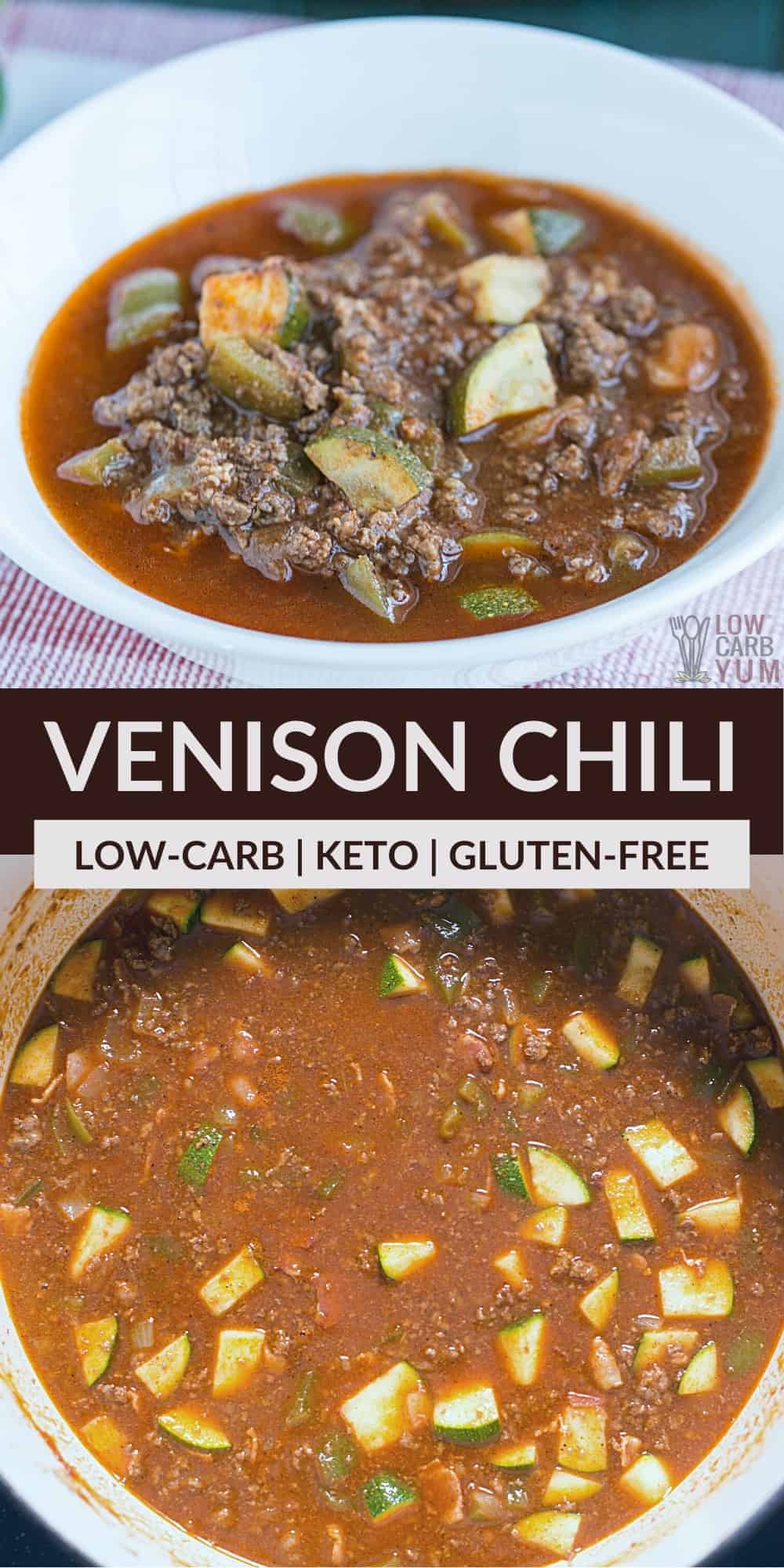 Venison chili is rich and hearty, made with ground meat, bacon, veggies, and healthy beef bone broth. This deer meat chili recipe is a comforting, paleo and keto-friendly, low-carb meal for hunting season or any cold-weather night. Make it on a stovetop or in a slow cooker!

Whether you know someone that likes to hunt deer or you just want to eat a different kind of meat, chances are you have heard of deer meat.

It’s also called venison, and it is very popular, especially during hunting season. This recipe is perfect for days when it is colder out, and you need something that will warm you up.

Venison chili is a wonderful way to put a fresh new spin on a classic recipe. Keep reading, and you’ll be wanting to cook with deer meat too!

This recipe uses pretty basic ingredients that are packed with flavor and low in carbs. As it slowly cooks all day, it will fill your house with the most amazing aromas!

When you are on a low-carb diet, always get bacon that has no added sugar. This means to avoid any “maple-cured bacon”. Just look at the ingredients and pick out the ones that don’t have sugar as an ingredient.

I always use all three aromatics in my chili – garlic, onion, and bell peppers. I only used one bell pepper in this chili, but you can use a chili pepper or even more bell peppers if you like.

The type of venison isn’t as important. You can use either ground venison or cubed. Both will taste amazing.

I used beef bone broth, but you could also use chicken bone broth. I’m sure vegetable broth will taste good too, but the meaty broths will have a fuller flavor.

For the spices, feel free to experiment and use as much or as little as you like. I used chili powder, tomato paste, red wine vinegar, cumin, salt, pepper, and a bay leaf. But you can use your own chili seasoning mix if you prefer.

I have heard of people adding a dash of cinnamon to their chili too. If you try it, let me know in the comments down below!

Vegetables are optional, but I think they add nutrition to the chili, so I always add a zucchini. You could add yellow squash or carrots as well.

Here are some tips to help you make venison chili in the slow cooker easily and with the most flavor:

How To Make Deer Meat Chili In The Slow Cooker

All of the instructions are in the printable recipe card at the bottom of this post. I have instructions for both the stove top and slow cooker.

First, here are some photos and tips about the recipe process, and I’ll explain how to make it in the slow cooker.

Start out on the stovetop. Fry the bacon first because you will use some of the bacon grease to cook the rest of the ingredients. After the bacon is nice is crispy, put it in the slow cooker.

Next, saute the onion, pepper, and garlic in the bacon grease. Keep cooking it until the onion is translucent.

Add the venison to the pan with the garlic, peppers, and onion, and cook until it is browned.

When it is all cooked, add it to the slow cooker.

Add The Rest Of The Ingredients

Add all the rest of the ingredients to the slow cooker. Mix it up really well. The bay leaves are optional.

Cover the slow cooker and cook it on either high or low. That’s it!

What To Serve With Venison Chili

This is a very hearty chili recipe, so it’s amazing all by itself. However, if you want something on the side that is low in carbs, add some cloud bread. It is light and tastes amazing with spicy chili.

Before we get to the recipe card at the bottom of this post, here are some questions people often ask about how to make it.

What are the benefits of eating deer meat?

If you’re a hunter or friends with someone who hunts, you’ve likely tasted some homemade deer jerky. It’s super popular because it’s a great snack to take along while hunting.

Deer meat and the meat of elk, reindeer, antelope, and caribou are all considered venison. Wild game like venison is leaner than ground beef, has fewer calories per serving, and more vitamins and minerals.

Plus, the flavor of venison is much heartier than the flavor of ground beef. That extra flavor makes for a more comforting, filling meal, and it’s what makes ground venison chili so appealing.

Where can I buy ground venison?

If there are no hunters in your family and you don’t have a local source for venison, don’t worry. There are many places online (including Amazon!) where you can purchase ground venison.

Another option is to grind your own venison. It’s very simple to do and will save you money over having a butcher grind it. But again, you’ll first need to source the deer meat.

If you want to grind your own meat for deer chili, check out these tips from Cabela’s.

Butchers recommend that at least 10 percent pork be added to a ground venison blend. Not only does the pork add flavor, but it also adds fat. As a result, you’ll make a ground meat dish that everyone will love!

How do you make deer chili on the stovetop?

Although I have a slow cooker venison chili recipe option, I recommend making it on a stovetop. Not only will it save you time, but it also allows you to add seasonings during the cooking time. You can monitor and taste the hearty meat stew as it cooks.

In contrast, removing the lid of a slow cooker allows heat to escape. For that reason alone, you shouldn’t add any seasonings during the cooking time.

Another great reason to make venison chili on a stovetop is to achieve the best flavor possible! Most of us know that when you make any type of chili, it’s necessary to brown or sear the meat.

Since a slow cooker doesn’t have the capability to brown meat, you’ll need a stovetop to do that. Rather than having to wash the pot and your slow cooker, why not just keep making it in the pot?

It makes sense to me, anyway.

Other Venison Recipes To Try

If you’re a fan of game meat, I think you’re gonna love this dish because it’s my best venison chili recipe. You should also give these low-carb dinner recipes a try: 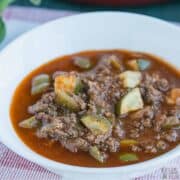 First published on August 26, 2019. Last updated on May 18, 2021 with higher resolution photos and additional recipe tips.