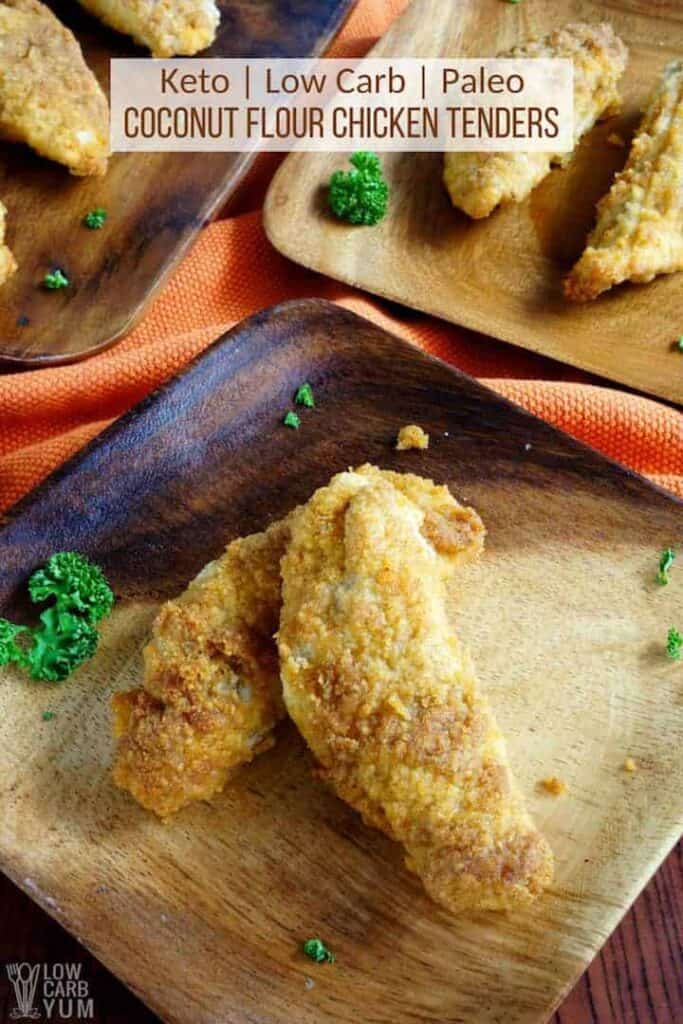 My kids really like chicken tenders, but I hate the wheat flour coating. Since my older daughter (the pickiest child) seems to like other recipes I've made with coconut flour, I decided to try and make some low carb baked coconut flour chicken tenders.

This is actually the second recipe I tried. The first one dipped the chicken tenderloins in beaten eggs before coating in the coconut flour mixture, but that batch was very dry. Since making this, I also now love to make a chicken tenders wrapped in bacon.

To get the chicken moist without frying, I knew that some oil was needed. So, in my second attempt at baked coconut flour chicken tenders coated the chicken in olive oil rather than eggs.

What was the result using oil? A juicy chicken underneath a crisp gluten free coconut flour based coating. And the best part? My picky daughter ate three of the tenders without complaining.

To make the oven fried chicken tenders, simply blend up the spices with coconut flour and either Parmesan cheese or nutritional yeast. (photos 1-4) Nutritional yeast gives a cheesy flavor without added dairy.

It's best to spray each tender with oil after coated. This helps to prevent the coconut flour coating from being too dry.

And flipping the tenders about halfway through helps them to cook evenly. Baking on a rack also keeps the coating on better than frying in oil.

An air fryer is another great way make these coconut flour fried chicken without frying in oil! Air fryer chicken tenders are extra juicy too.

Thoughts on the Recipe

I've been trying to move towards a more Paleo low carb diet and this coconut flour chicken tenders recipe is Paleo friendly as well as being gluten free. You'll just want to omit the Parmesan cheese or replace it with nutritional yeast for Paleo.

Although I thought the spice mixture was pretty good, you may want to tweak it a bit to suit your own taste. I recommend using kosher or natural sea salt because those coarser grinds stick best to the meat.

Each chicken tenderloin is drenched in olive oil and then coated in the seasoned coconut flour mixture. It goes really fast so this is something that you could easily make on busy evening. The prep time is about 5 minutes.

I've found that raising the "breaded" meat off the pan helps the coating to crisp up better. I use a regular Baker's cooling rack for this and just place the rack on top of a shallow baking pan.

In addition, flipping the chicken tenders halfway through baking also allows for more even browning.

Don't these baked coconut flour chicken tenders look like they were fried? They come out nice and crisp from the oven. The meat stays juicy inside because it is covered in high fat olive oil before adding the seasoned flour coating.

You may also want to check out my low carb chicken nuggets recipe. I find that baking and then frying gives the best results.

UPDATE: I've updated the recipe based on a few comments received. These changes made should result in tenders that are cooked to the right internal temperature (165°F) to reduce drying the meat out from overcooking.

The original baking temperature of 425°F seemed to be too high so I reduced it to 400°F. So the baking time was reduced from 30 minutes total to 20-25.

I tested these with a meat thermometer and they registered 165°F just after 20 minutes. Another comment was the dryness in the coating.

This was fixed by dipping each tender in olive oil and then the dry coating. Since this makes the baked coating soft and moist, I recommend placing the tenders about 6 inches from the broiler (on high) for about 1 minute each side to crisp the outside. 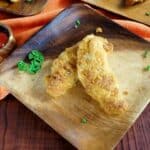 © LowCarbYum.com
Unauthorized use of this material without written permission from Lisa MarcAurele is strictly prohibited unless for personal offline purposes.
Single photos may be used, provided that full credit is given to LowCarbYum.com along with a link back to the original content.
« Gluten-Free Cinnamon Bread (Low-Carb)
Chunky No Bean Chili »