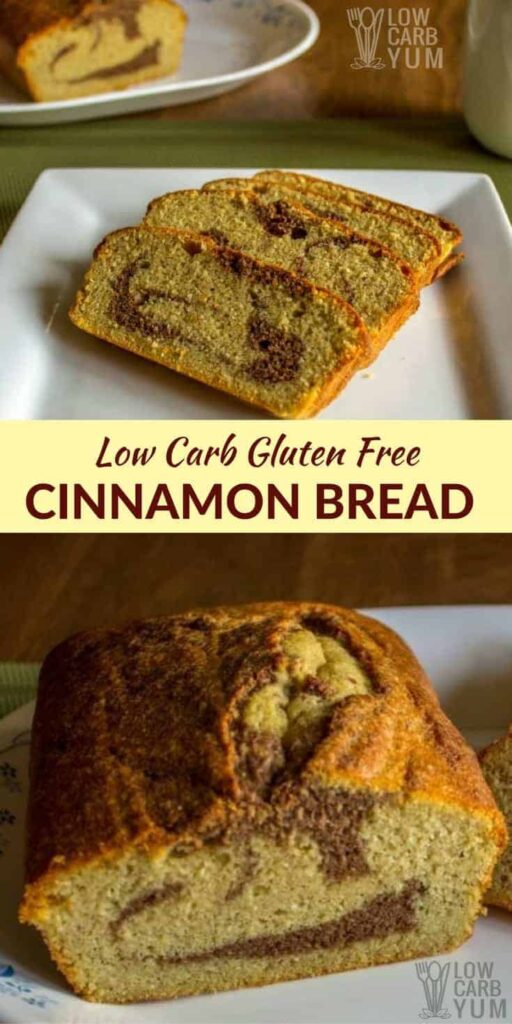 Enjoy this tasty low-carb gluten-free cinnamon bread for breakfast or snack. It's a sweet quick bread with a pound cake texture and no sugar added.

It's been a while since I've developed a sweet bread recipe using my basic quick bread recipe as a base. The quick bread variations I have made so far are zucchini bread, banana bread, and key lime coconut bread.

My latest creation is a delicious low carb cinnamon bread. I've actually been thinking about making the bread for a while. At first I thought about doing a cake with glaze, but I really wanted to keep it simple.

I don't know about you, but quick and easy is high on my list when it comes to recipes. That's why I love making low carb quick breads. And, this gluten free cinnamon bread is a new favorite.

Easy cleanup is another thing I strive for so now I line my bread pans with parchment paper rather than grease them. No more scraping the pans after baking. Yeah!

Although most quick bread recipes are just dump and bake, this gluten free cinnamon bread requires a bit more work. But, it doesn't require much more effort.

There's a small amount of batter that's mixed into a sweet cinnamon mix and layered in. After the layers are made, you just swirl the cinnamon batter into the regular batter with a knife. It's just like doing a marbled cake.

I did like three quick strokes of the knife lengthwise in the pan. You don't want to go overboard. Just a few twirls are enough to get a nice marbled effect.

The top of my bread browned a bit too much. I probably should have covered the bread loosely with a foil tent sooner so the top did not brown so much.

But, the gluten free cinnamon bread still it came out okay. The taste was not affected. It just would have looked better a little lighter.

You have to keep an eye on the bread at the end of baking as you want to pull it out just when the center is no longer wet. I ended up keeping my bread in the oven about 5 minutes after turning the oven off so that the center would set properly without overbaking.

The taste of this low carb bread is fantastic. The texture is similar to a pound cake because the almond flour tends to make quick breads dense and heavy.

You could drizzle a glaze made with powdered sweetener on the top if you'd like, but I thought it was perfect as is. This sweet keto friendly bread is a wonderful treat with your morning tea or coffee.

And, if you'd like to see even more low carb sweet bread recipes, check out my this Pinterest board. 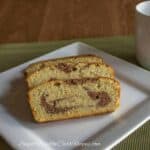