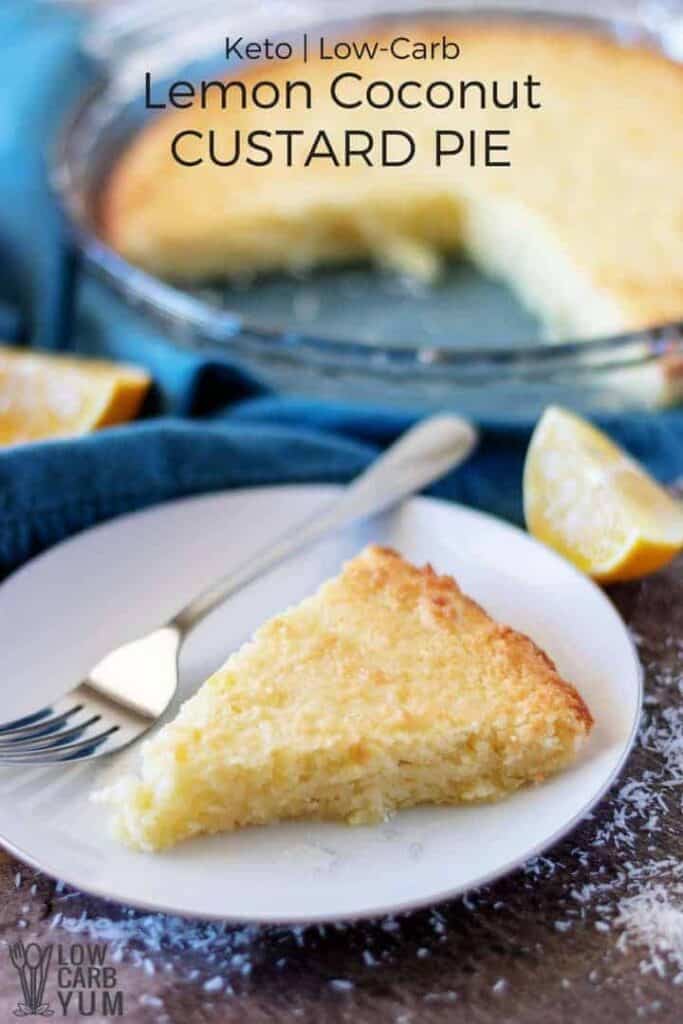 An easy lemon coconut custard pie with coconut milk that's low in carbs and keto friendly. And there's no need to make a crust to make it a simple crustless pie.

After posting my creamy lemon custard pie with meringue, I thought about making a pie more like the crustless coconut pie recipe. I do prefer a crustless pie, but the lemon custard was too soft for that.

If you're new to the Keto lifestyle, whether it's for medical reasons or just weight loss, here's a question you might be asking:

Can a Keto pie really taste good? Like comfort food should?

Low-glycemic keto pies can be mind-blowing moist. And dare I say, even decadent.

But this coconut custard pie doesn't leave you with a nasty, artificial aftertaste. This is an important fact to address in learning how to cook healthy desserts.

You can't use artificial sweeteners just to keep the net carbs down. Sugar substitutes that are man-made trick the brain into wanting more and more.

Thus, eventually, you'll end up eating more and more pie. And the rest of the ingredients will have calories so you'll defeat the purpose of eating low carb.

However, if you use a healthy fat in your recipe, you'll be able to keep it keto and curb your appetite.

Coconut Custard Pie: Will All That Coconut Kill Me?

Yes, coconut oil has been trendy going on for about a decade now. And that's a good thing. To be honest, I'm not sure I'd be able to pull off some of these delectable desserts on my blog if it weren't for coconut oil.

Without doubt, there are still some coconut critics out there. In fact, about a year ago, in the mainstream media, there were lots of articles with bait-click headlines. "Coconut oil isn't healthy. It's never been healthy."

Well, thank you, USA TODAY for the warning. That means more coconut oil for me!

Actually, I think it's a shame for this disinformation....

One reason why the article suggests coconut oil is bad for you is the high saturated fat content.

But if the fat is all-natural and hasn't been denatured/gone rancid/spoiled due to heat, light, air or hydrogenation, there's no need for the dire warning.

LDL in Coconuts: Reason For Concern?

Another reason coconut gets a bad rap by the mainstream is that it raises LDL levels. Although that's true, it's not necessarily a bad thing.

In fact, as this article says, you need a certain amount of LDL to gain more muscle mass. Furthermore, all your bodily tissues need cholesterol. And LDL delivers it.

Here's another reason why LDL isn't synonymous with a massive heart attack. When levels of it are high, it serves as a warning sign that something is wrong.

So who cares if coconut raises your LDLs....?

It also raises your HDLs, too. HDL removes cholesterol build up from the arteries.

But why all this talk about coconuts?

And second, perhaps because of the preponderance of articles online bashing coconut nutrition, I have been getting more emails asking if coconut is keto-friendly.

Now, granted, I'm just a humble low-carb food blogger. But if there's one thing about me you need to understand is I'm a pesky, diligent researcher.

I'll sift through research journals and nutrition articles until my eyes bleed until I come to a conclusion.

Most articles that focus on coconuts do so emphasizing the oil. I wish there were more focus about coconut flour. Using it transforms high-sugar recipes into healthy, delicious creations.

Many of my followers report that they're skeptical of baking with coconut flour. Primarily because they don't like the strong taste of coconut.

But you might be surprised. Even if you despise coconuts. Coconut flour isn't too, well, coco-nutty.

It's gluten-free, it's high in protein and dietary fat. I can't emphasize enough that if you want to do dessert the healthy way, you need enough fat.

If a dessert has enough fat while also being very low in net carbs, just one serving will likely satisfy. This is why I love using coconut flour (and almond flour) in my desserts.

If you need some reasons to try it, I put together a collection of simple coconut flour recipes.

My recipe calls for two large eggs. I'll leave it up to you what natural sweetener you want to use. I've used the sugar alcohol, Swerve, in several recipes.

Unlike other sugar alcohols, it doesn't cause bloating or gas. You can also try Stevia extract or monk fruit extract.

I hope you enjoy the recipe. Is it a dessert that satisfies your sweet tooth and cravings? Does it taste amazing? Tell me what you think....

Did you know you can make a coconut pie out of yellow squash? Check out my yellow squash pie recipe to see how I do it. 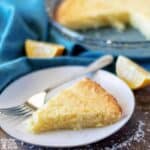 Make sure the butter has cooled completely so it doesn’t scramble the eggs. If the pie is served warm, it will crumble and fall apart. It needs time to set.
This pie can be frozen for up to six months. It should be placed in the refrigerator to thaw before serving.

© LowCarbYum.com
Unauthorized use of this material without written permission from Lisa MarcAurele is strictly prohibited unless for personal offline purposes.
Single photos may be used, provided that full credit is given to LowCarbYum.com along with a link back to the original content.
« Turkey Zucchini Meatballs (or Chicken) Baked in the Oven
Pressure Cooker Pork Loin Roast Recipe »