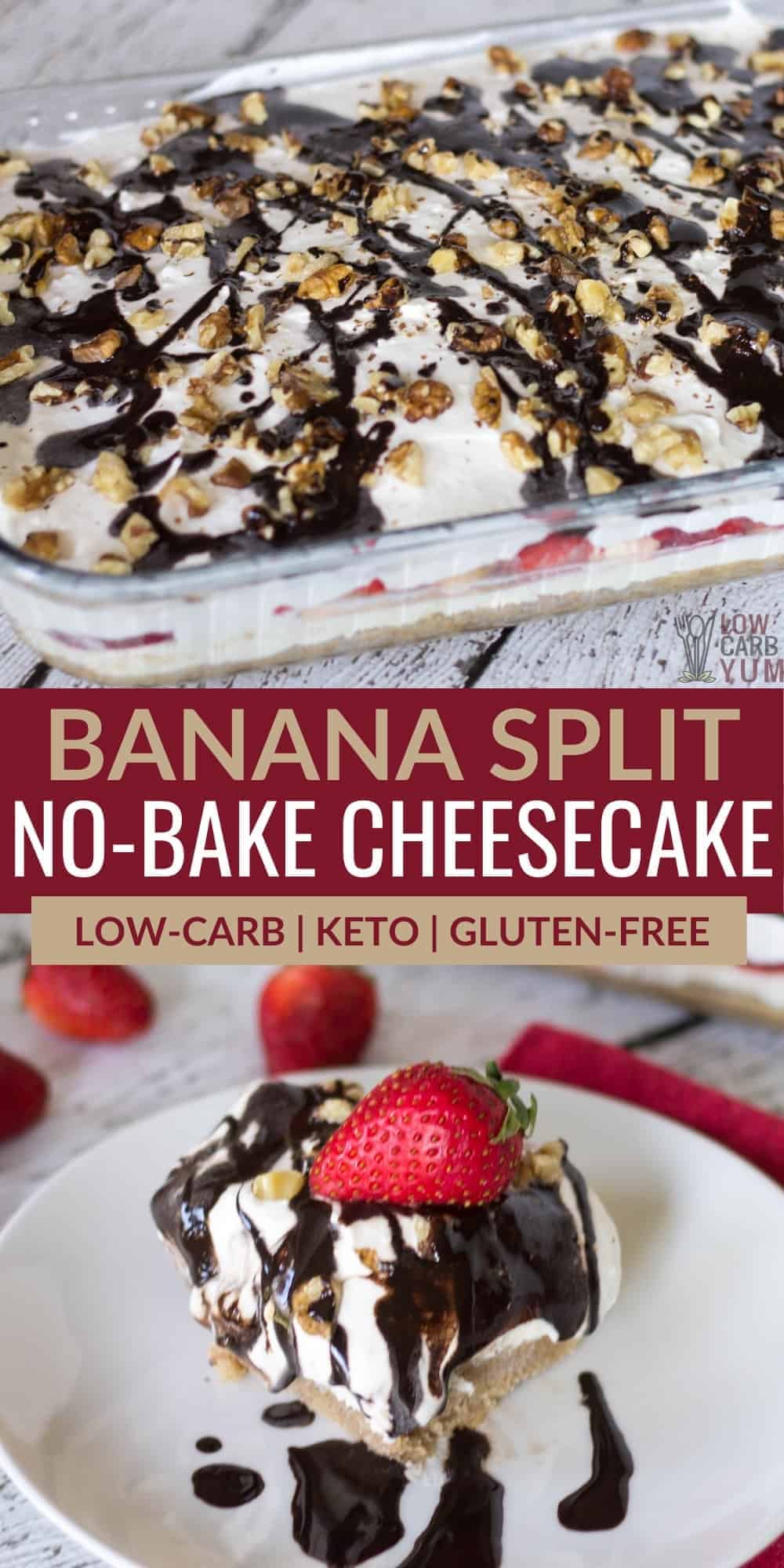 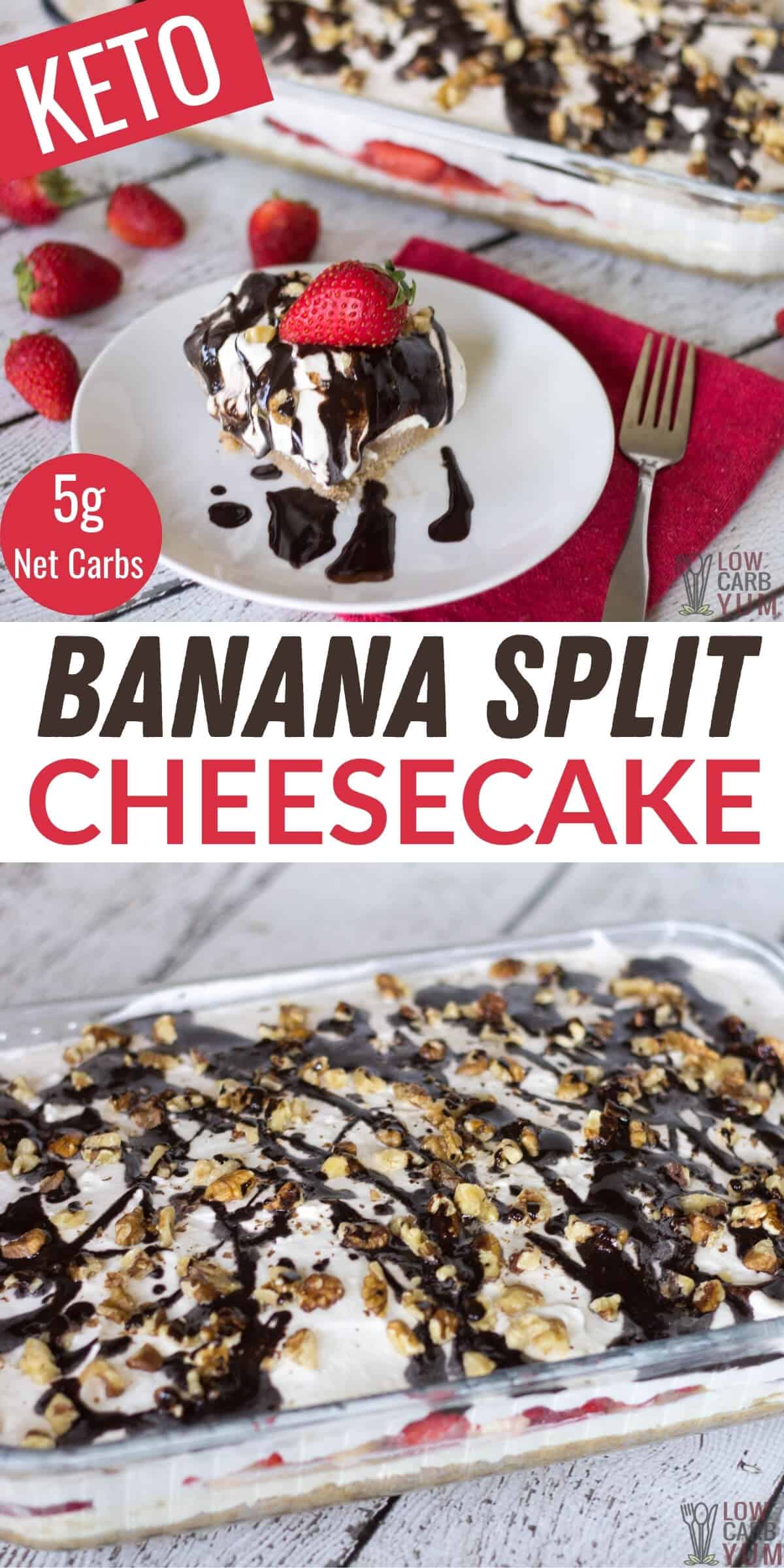 Here's a delicious no-bake banana split cheesecake that looks and tastes spectacular! You can make a large pan of this low-carb dessert for parties or just keep some in stock in your fridge.

Most people have memories associated with certain foods and I'm no different. For as long as I can remember, I have always looked forward to sweet treats in my life.

You have probably noticed that I have a lot of low-carb desserts on this blog. And, as you can see, you don't have to give up sweets when you move to a low-carb way of eating!

However, after years of being away from sugar, I don't like really sweet-filled foods as much anymore. So, my sweet tooth has weakened and the desserts that I make now are less sweeter than what I used to enjoy on a high-carb diet.

One dessert that brings back memories for me is this no-bake banana split cheesecake.

I had a friend who I used to work with who would bring in her famous no-bake cake every month to celebrate all the birthdays of the month. I used to look forward to each month when it was time for her to put out that cake!

The no-bake banana split cake cheesecake she brought in was more of a no-bake cheesecake rather than a traditional birthday cake. Everyone loved it, especially me.

So, I've now recreated a low-carb version of that cheesecake and I have to say- it's just as delicious (if not more)!

I've modified the original recipe a bit to bring the carbs down. This is my version of the monthly birthday cake that was shared!

All of the exact ingredient amounts are listed in the printable recipe card at the bottom of this post.

Here's how I modified this banana split cheesecake to be a low-carb:

Instead of a crumbly graham cracker crust, I modified it to be more of a standard cheesecake crust made with low-carb almond flour instead of crackers.

In the original recipe, it calls for 8 ounces of cream cheese, but she sometimes doubles that to 16 ounces. Since cream cheese is the best and adds a lot of fat, I used the higher amount!

Instead of a fruit filling, I used strawberries! You could use another fresh low-carb berry as well. I also used one banana but that can be omitted if you'd like to only stick to berries.

My friend's no-bake banana split cake was topped with a whole container of Cool Whip! Although low carb, I'm not a fan of the ingredients in Cool Whip, so I used a stabilized whipped cream recipe in place of the non-dairy, sugar-free whipped cream.

You'll find all the details for this cheesecake in the printable recipe card at the bottom of this post.

The entire process is really simple and it involves three basic steps.

You just make the crust first (I recommend using this almond crust recipe) and press it into the bottom of the 9x13-inch dish.

Then, make the cream cheese layer and spread this on top of the crust.

The next step is the fruit filling that goes over the top of cream cheese which is basically the fruit mixed with lemon juice.

Top With Your Favorite Toppings

Finally, make the whipped cream layer and then top with your favorite nuts. I used chopped walnuts!

What To Serve With Keto Banana Cheesecake

This is a very indulgent recipe, so serve it with something that is low in carbs. This cheesecake will taste perfect with a hot cup of tea or some coffee.

In fact, you can even serve it with a cup of bulletproof coffee!

The recipe is a little further below. First, I want to answer some questions people often ask about banana cheesecake.

Is it safe to eat raw almond flour?

Since almond flour is basically just finely-ground almonds, it is safe to eat it without needing to cook it first.

Can you bake the crust?

Yes, you can pre-bake the crust if you want to! This will make the crust taste toasted which might turn out quite delicious.

How do you halve the recipe?

If you don't need the entire 9x13-inch dish amount, then I suggest halving the recipe.

To do this, just use half of all of the ingredients in the recipe card. Then, press the crust into an 8x8-inch dish.

Don't want to do the math? My printable recipe card allows you to change the servings amount. As you slide the scale to the number of servings you want to make, it automatically updates the ingredient amounts.

How do you store no-bake cheesecake?

There are two ways to store the cheesecake - in the refrigerator or in the freezer.

To store it in the refrigerator, seal it in an airtight container and keep in chilled for up to 3 days.

It will stay fresh in the freezer for up to 3 months.

Bananas actually have quite a few carbs and natural sugars, so I do not recommend eating them on a low-carb diet. You can use them in this recipe if you only use a few pieces spread throughout the entire cheesecake. Or, use a banana extract in the cheesecake layer similar to my keto banana pudding recipe.

When you are craving a fruity cheesecake or a banana split, this recipe is the best! It's so fun to change it up too - add your favorite nuts or sugar-free syrups and it tastes different each time.

Other Low Carb Cheesecakes To Try

If you enjoyed this banana split cheesecake, then here are some more amazing low-carb cheesecakes you should try next. They are some of my favorites too! 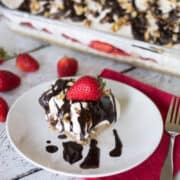 To keep the carb macros low, don't use very many bananas. Since you are spreading out the bananas over the entire cheesecake, each portion won't have very much of this high-carb fruit in them.  To lower the carb amounts, use fewer bananas or replace bananas with all strawberries or another low-carb berry.