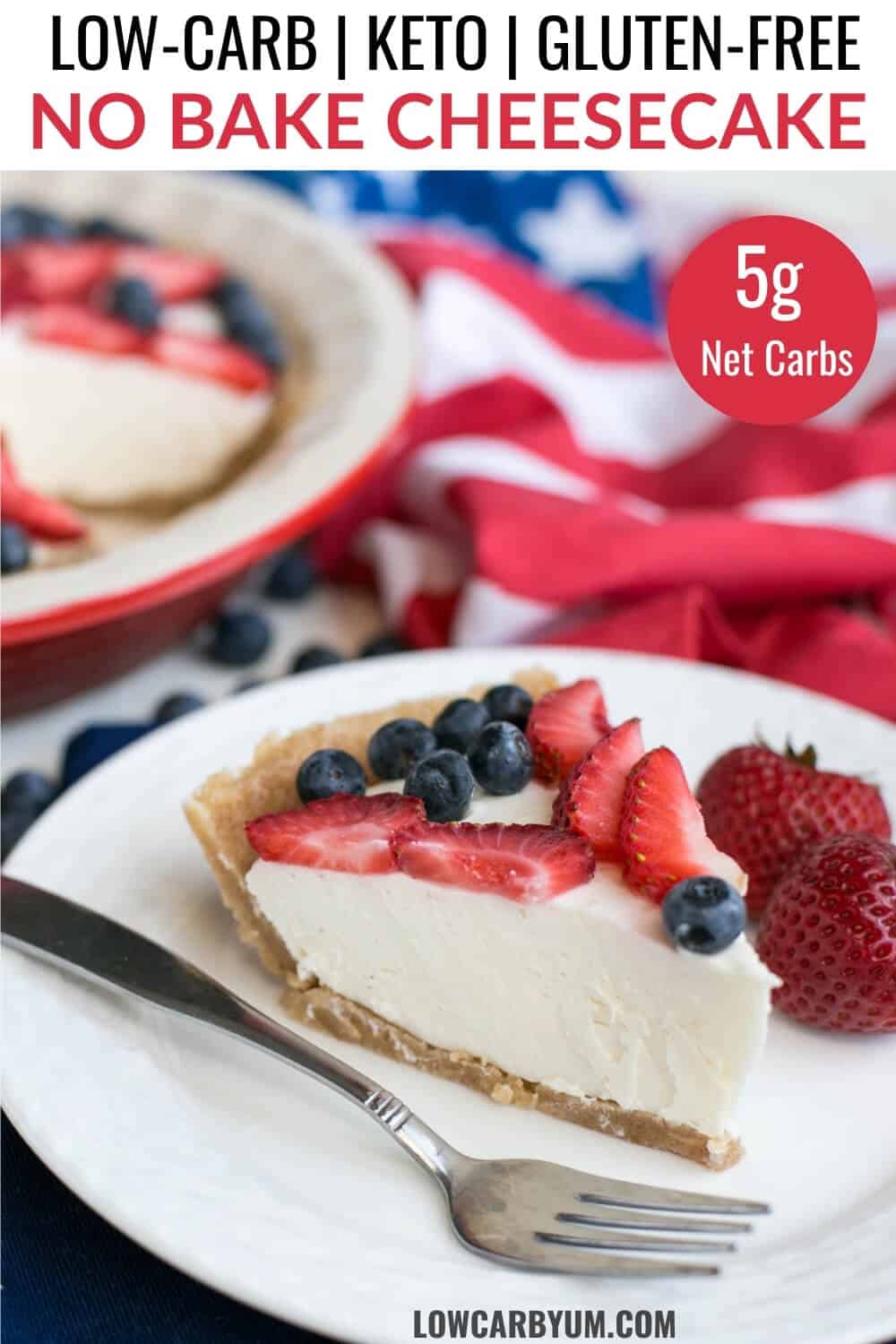 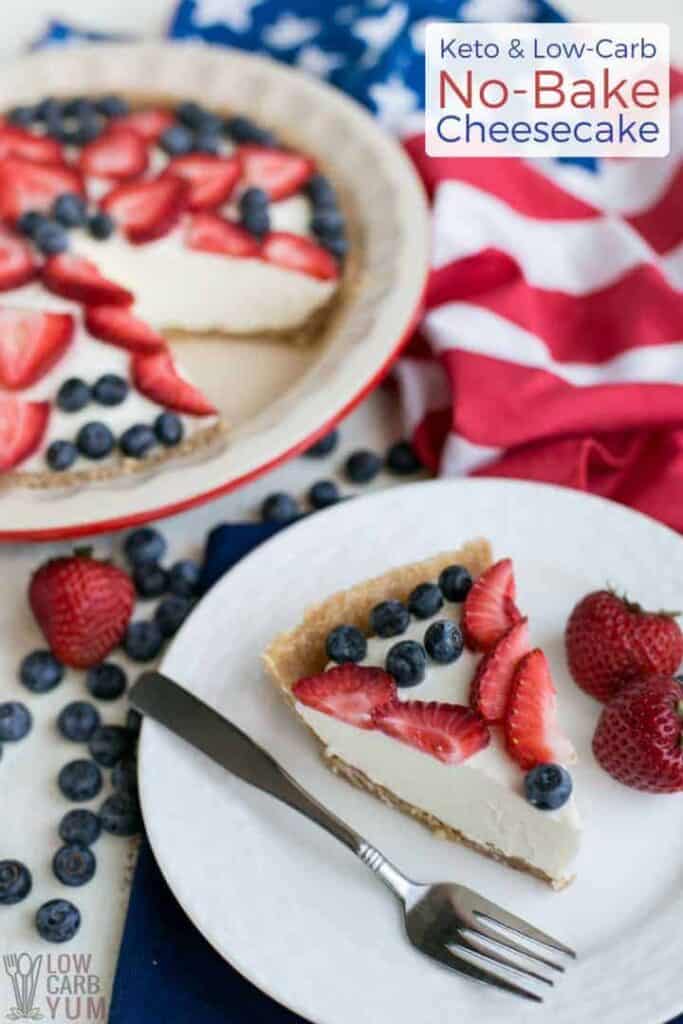 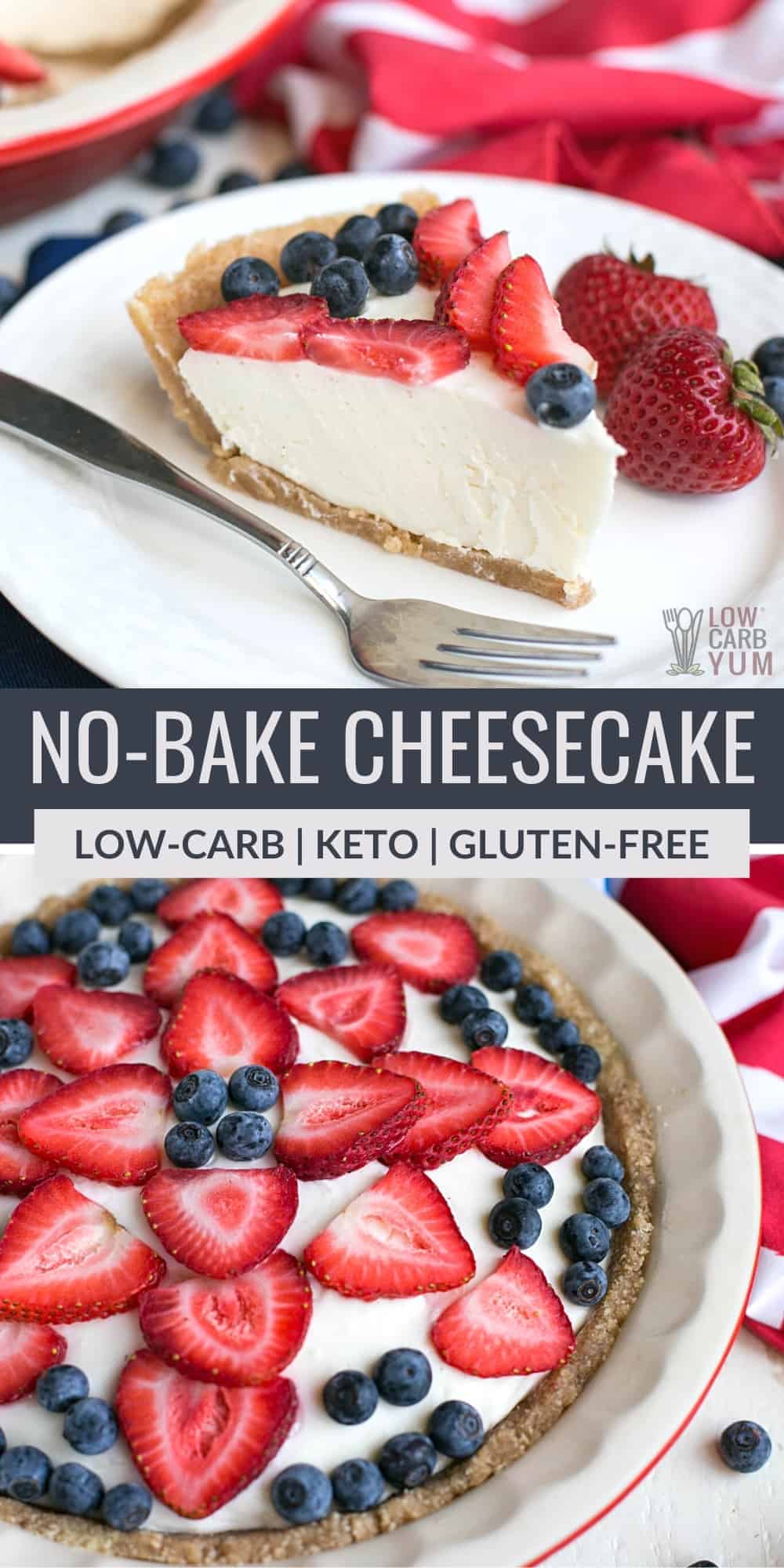 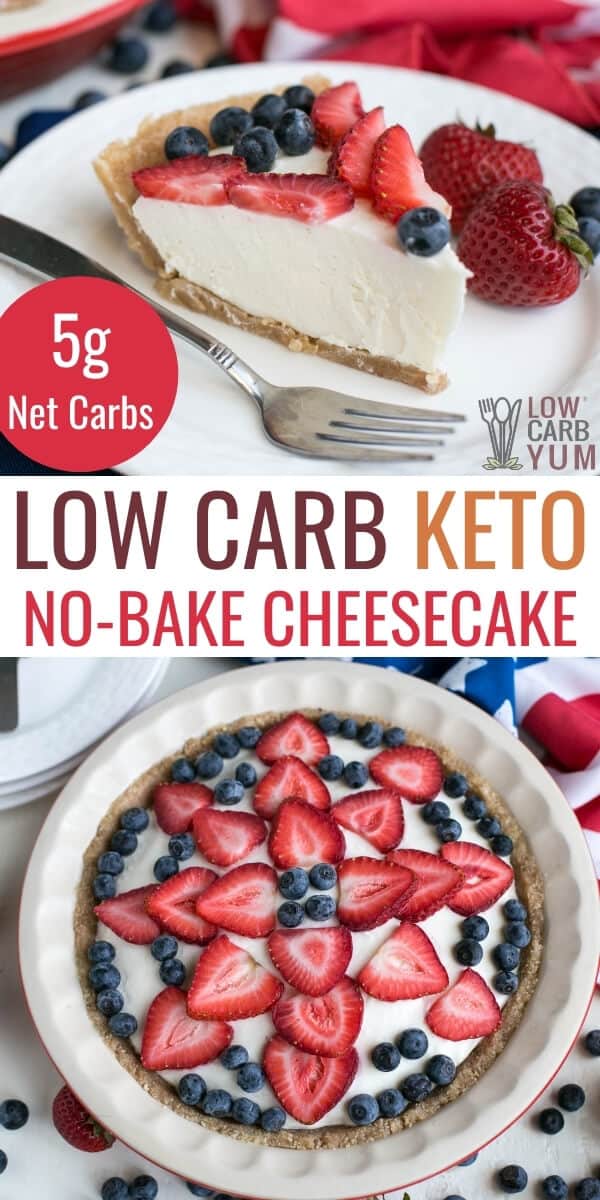 An easy to make keto no-bake cheesecake is the perfect dessert for summer. It holds up well in the summer heat with no need to turn the oven on.

It's so hard to believe that the school year is coming to an end. That means summer fun is happening soon and I've got to get off the computer.

Here in Southern New England, the warm weather doesn't last long so it will be gone in the blink of an eye. But, I'm hoping to create some awesome treats to beat the heat.

One of the things I've been wanting to make for a long time is a low carb no bake cheesecake. In fact, it's hard to believe it took this long to post one.

There are three steps to this cheesecake recipe, and none of them involve the oven.

Although I often like to make a no bake keto cheesecake crustless, I felt this one deserved a crust. The great thing is that it requires no baking.

You may recognize this crust as I've used it before. It's just been resized to accommodate a full size cheesecake pie.

It's the low carb no-bake cheesecake crust that was used in my key lime cheesecake in a jar recipe. And, it's the perfect base for all of your pies.

The first thing you need to do is combine almond flour, sweetener and cinnamon in a pie pan. (photo 1) Then you add in some melted butter. (photo 2)

I use a fork to blend everything together and then press it firmly into the pan. (photo 3 & 4) I like to use the back of a spoon or just my fingertips.

Then, I put the crust in the refrigerator for at least an hour so it can harden before adding the filling. This is a great time to check email do some reading.

Way back in the day, I used to use canned sweetened condensed milk to make a no bake cheesecake filling. However, these days I'm a lot smarter.

To get the filling to stay stiff, I like to add gelatin. If you'd rather have a creamy and fluffy filling, I'd recommend using my keto friendly cheesecake mousse.

However, I think this firmer gelatin based filling holds up a lot better as the filling for a low carb no bake cheesecake.

And, if you want to get it out of the pan easier, it's best to use a springform pan like I did for my no bake peanut butter cheesecake.

To make the filling, I dissolve the gelatin and sweetener in boiling water until the powders have completely dissolved. (photos 5 & 6)

Then, I use an electric mixer to beat the cream cheese and vanilla extract together. (photos 7 & 8) Sometimes, I also like to add in some lemon extract to enhance the flavor.

Next, I pour in the gelatin sweetener mixture into the beaten cream cheese. The low carb no bake cheesecake filling will seen very thin at this point. (photo 9)

Then, I'll take the bowl of the filling mixture out of the refrigerator when it has thickened enough to a spreadable consistency. (photo 10)

At this point, I take a rubber spatula to evenly spread the filling into the prepared crust. (photo 11)

The cheesecake looks rather plain as-is so I go ahead and dress it up with some fresh berries. (photo 12) This makes it much prettier and ready for a 4th of July celebration!

One of the cool things about this recipe is that you can easily adjust the flavor by using a sugar free gelatin mix. But, watch out for artificial food dye.

The one color you need to be especially mindful of is red because red 40 side effects are a concern. I also avoid certain artificial sweeteners.

Sucralose is the only artificial sweetener that I use on occasion. I don't use it that often because I prefer to stick with natural based foods.

But, there are times when I'm out and will grab a sugar free snack sweetened with sucralose. It's a sweetener that's been around for a while that's been shown to be safe.

If you'd rather not use a sweetened and flavored gelatin mix, there's always the option to use a flavor extract or herbal tea.

I tried the low carb no bake cheesecake with a couple teaspoons of lemon extract and it was a nice change of flavor. But raspberry extract or coconut extract are good options as well.

If you go for the coconut flavor, I'd top the cheesecake off with some toasted coconut just like I did for my low carb coconut cream pie.

You can also leave off the fresh berries and serve it with my strawberry sauce for cheesecake.

It's not hard to see why this keto no bake cheesecake is a winner when it comes to summer desserts.

First of all, there's absolutely no baking involved just like my Irish cream cheesecake recipe. Secondly, it uses fresh berries that are in season during the summer similar to a simple cheesecake salad.

And, it's a gorgeous dessert that will hold up well in the summer heat! An added bonus is that it can be made in red, white, and blue to celebrate the 4th of July or the end of summer.

Of course, it's best to serve this treat chilled from the refrigerator. But, the gelatin makes sure that the cream cheese filling stays set.

Are you ready to give this cheesecake a try? Definitely come back and let me know what you think in the comments if you do test it out.

Enjoy this super simple summer treat! For more ways to enjoy low-carb cheesecakes, take a look at my favorite ideas: 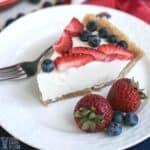