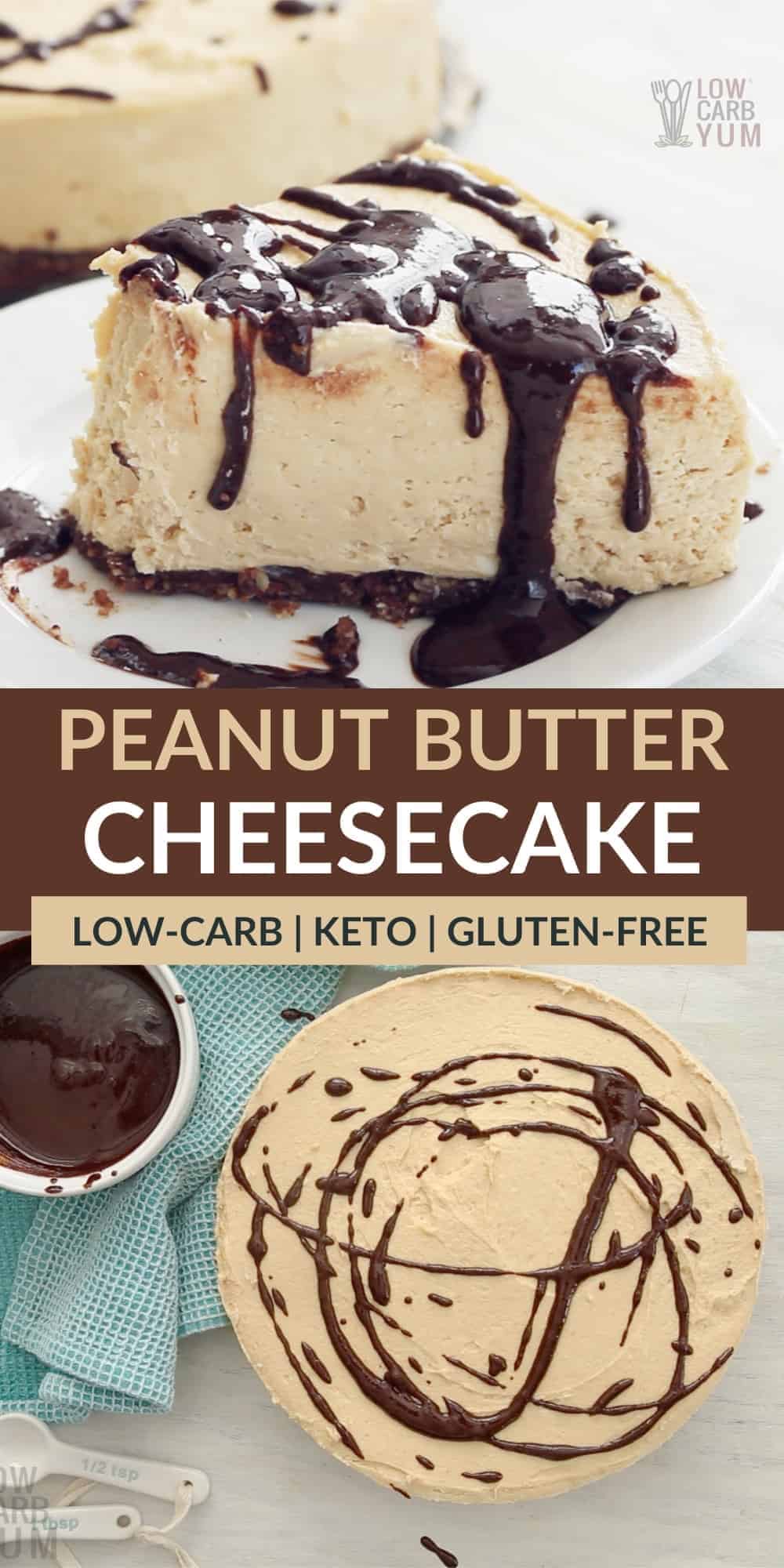 Are you looking for low carb peanut butter recipes to add to your collection of keto recipes? If so, you are going to love this no bake low carb cheesecake.

You’ll want to take this low carb dessert to all your summer gatherings. But, it’s also a recipe that can be made year round. Even family and friends who aren’t cutting carbs will gobble down this tasty sugar free cheesecake.

With the heat of summer, no one wants to be turning on a hot oven to bake a traditional cheesecake. So this is sure to become a regular when you need a quick and easy summer dessert to share.

How to make no bake peanut butter cheesecake

I made the keto peanut butter cheesecake in a springform pan to give the look of a baked cheesecake. But, unlike a traditional cheesecake, it sets in the refrigerator.

I considered making this in a pie pan like I usually do for no bake cheesecakes. But I thought it would give a much better presentation using a springform pan, and it certainly does. However, you can make a traditional pie crust if you prefer.

The gluten free crust is just a mix of almond flour, cocoa, sweetener, and butter. To make for easier cleanup, everything is mixed inside the pan and then just pressed in.

When making the crust, I find it easiest to press the crust down with my hand. I do cover my fingers with a plastic baggie so the crust mix doesn't stick to my hand.

When making the filling, you’ll want to make sure that both the cream cheese and peanut butter are at room temperature. If cold, it the ingredients can be difficult to combine into a creamy mixture. But to save time, you can microwave both for about 30 seconds to warm them up.

Sweetened stabilized whipped cream is perfect for making no bake desserts. It's just heavy cream whipped with gelatin added to prevent it from deflating. But if you'd prefer not to use gelatin, ¼ to ½ teaspoon of cream of tartar can be used instead.

Fresh whipped cream also gives the dessert a light and airy texture. However, it needs to be gently folded into the peanut butter cream cheese mixture to keep it fluffy.

Once the filling is made, simply spread it out over the crust in the pan then chill. It should be ready to serve in about 2 to 4 hours.

I like to use creamy peanut butter in the recipe, but you can certainly use chunky. And if you're avoiding peanuts, you can use a different nut or seed butter. I really like using sunflower seed butter.

If you want to cut back on carbs, you can always omit the crust. Just spoon the filling into individual dessert cups. However, it’s more of a peanut butter mousse if you do that.

Without the crust, I'd serve it with drizzled chocolate or sprinkle each serving with chocolate chips. That's because chocolate really enhances the flavor and color of peanut butter desserts.

I wasn't planning on adding chocolate to the top of this cheesecake. But when the cheesecake looked really plain when the springform pan side was removed. The cheesecake was begging for some color on top.

I thought about just sprinkling on some homemade stevia sweetened chocolate chips to give a contrasting color, but I knew that might add too many carbs. So, I made a small amount of chocolate ganache to drizzle over the top which really dressed it up.

The chocolate ganache will harden in the refrigerator. But you can drizzle it on just before serving if you want it to stay liquid.

You can also omit the chocolate drizzle or coat the entire top of the cheesecake with chocolate if you wish. Either way, everyone is sure to enjoy this rich and creamy cheesecake!

If you love this recipe, you may be interested in trying these other luscious treats:

My friend Adrienne over at Whole New Mom also has a quick and easy Chocolate Peanut Butter Chia Pudding that looks fabulous and whips up in no time.

Enjoy this simple no bake cheesecake and be sure to leave a comment if you do give it a try! 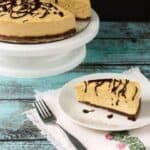 The whipped heavy cream can be stabilized with ¼ to ½ teaspoon cream of tartar for those who prefer not to use gelatin.