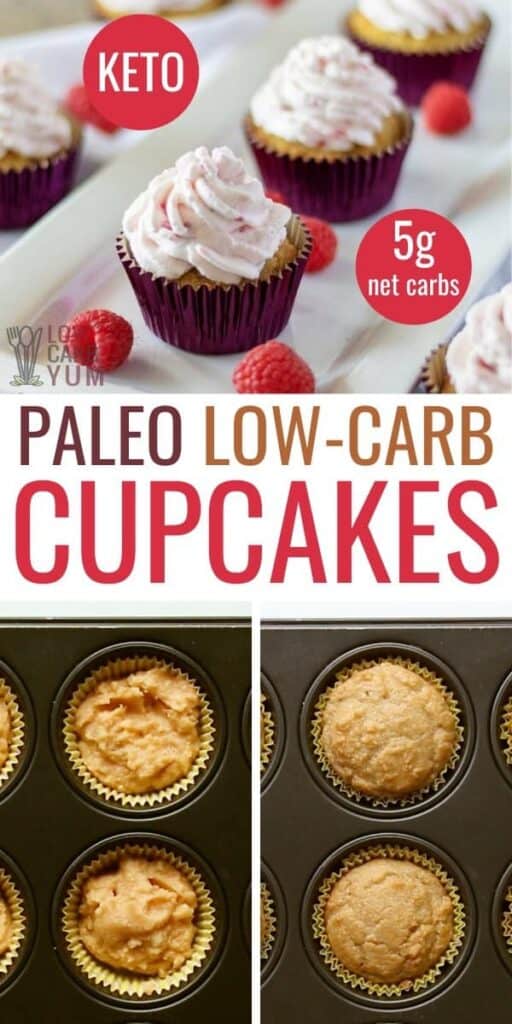 When you’re looking for a low carb, keto friendly treat, this easy paleo cupcakes recipe is just what you need! These cupcakes with almond flour and coconut flour are topped with a delicious raspberry frosting. It's the ultimate guilt-free indulgence.

While strict paleo may not include desserts, I believe we all deserve a treat every now and again. I would much rather enjoy a healthy dessert guilt-free.

That’s why I wanted to create a paleo cupcake recipe! Because of the low carb ingredients used, they also make a wonderful keto treat.

I’ve baked keto cupcakes with both almond flour and coconut flour in the past. But I wanted to do something different to make these paleo friendly.

The paleo diet typically recommends treating fruit as a dessert. So rather than use a chocolate or vanilla frosting, I chose to use a raspberry frosting. Not only is it delicious, but it’s also very pretty!

These coconut and almond flour cupcakes are perfect for any occasion. Their lovely color makes them an instant attraction. And their taste is even better!

If you’ve been looking for an easy, single-serving dessert that isn’t the same old chocolate or vanilla, you’ll love this paleo cupcake recipe.

Whether you’re baking a batch for a party or to share with your family, these are sure to be an instant hit.

How to make paleo cupcakes

They are also quite simple to make. To whip up a batch of these paleo cupcakes, you’ll simply blend together the batter ingredients, create the frosting while the cupcakes bake, allow them to cool, then frost and serve!

Making the cake base

A quick tip before we get started. We only want the fat from the coconut cream, not the water, for the frosting. The water won’t whip, so we need to remove it. Just set it aside for another recipe or a delicious smoothie!

To easily separate the fat from the water, simply place the can of coconut cream in the fridge for a few hours or overnight.

You also have the option to bake smaller cupcakes, or even mini cupcakes! These are great if you plan to share with a larger crowd.

To bake almond flour mini cupcakes, most of the recipe will remain the same, you’ll simply need to update the baking time.

I would recommend adjusting the baking time to 10-15 minutes. Make sure to check on them at the 10 minute mark to see if they’re done.

Freezing cupcakes made with almond flour

You can absolutely freeze your almond flour cupcakes for a quick treat that’s ready any time. I recommend freezing just the cupcake base without the frosting. But you can certainly freeze them frosted if you prefer.

The cupcakes will last in the freezer for several months. Once you’re ready to enjoy a cupcake, let it thaw in the fridge for a few hours.

While the cupcakes are thawing, you can whip up the frosting. Then frost your treat and enjoy!

Looking for other easy keto recipes that will also fit the paleo diet? Check out a few of these favorites:

I hope you enjoy this simple treat made with wholesome ingredients. And don't forget to leave a comment to let me know how they turned out.

Chill the coconut cream in your fridge so the fat and water separates!! Only use the coconut fat for the frosting, the water won’t whip. Strain raspberry puree to remove seeds from the frosting. If you aren’t paleo then try using two cups of heavy cream in the frosting.