For those cooking for only one or two people, a Dash mini waffle maker is perfect for portion control. These mini keto waffles recipes were created to yield only a couple servings so there’s no leftovers or overeating! But you can still make a double or triple batch to freeze some for later.

When the chaffle craze hit in 2019, I had no desire to experiment with them. The primary reason is because I’ve been avoiding dairy so I try not to eat cheese. That’s why I decided to create a dairy-free chaffle alternative.

One of the things I like about chaffle recipes is that they are created for a small number of servings. Since I’m the only one in the house eating low carb, I often have too many leftovers.

By creating variations for a basic mini keto waffles recipe, you’ll have simple ways to make breakfast, add a bun to a burger, and make personal sized desserts. All you need is a handful of ingredients you likely already have in your kitchen and a mini waffle maker like the one made by Dash.

You’ll get about four small 4-inch waffles using my basic recipe. To make them, you’ll need the following simple ingredients:

How to use a mini waffle maker

Before using, the waffle iron should be preheated for about 4 to 5 minutes. Most, including the Dash mini waffle maker, have a ready light to indicate when it’s hot enough to use. Then pour enough batter in to cover but leave a small space near the edges.

With just a few tweaks, I was able to create five variations of my easy keto friendly waffles. The majority of them are mini desserts made for two. But if you’re cooking for only one, you can stash the other away for later either in the refrigerator or freezer.

By adding in a little garlic powder and dried basil leaves, you can transform the basic recipe into a savory garlic bread. The 4-inch size you get from the Dash mini waffle maker is the perfect size to use as a low carb burger bun!

How to make cinnamon roll waffles

If you love keto cinnamon rolls but don’t want to take the time to bake them, mini waffles with similar flavors are a quick and easy substitute. I just added in liquid sweetener, vanilla extract, and cinnamon to the basic recipe.

For the yummy icing, you can make up a quick dairy-free cream cheese drizzle. I used vegan butter, and almond milk cream cheese style spread with vanilla extract and liquid sweetener. But if you aren’t dairy-free, you can use real butter and cream cheese.

How to serve mini waffles for dessert

When you’re the only one on a keto diet in your home, it doesn’t make sense to bake full-sized cakes. By adding in whipped cream, berries, or frosting to small sweetened belgian waffles, you can enjoy personal sized desserts without tons of leftovers.

Sweetened vanilla mini waffles are made by adding sweetener and vanilla extract to the basic recipe. For a simple treat, just top them off with berries. You can also add some dairy-free whipped coconut cream or regular whipped cream.

Adding in a little cocoa powder to the vanilla cake batter will make chocolate waffles. They can be served with whipped cream and berries or topped with your favorite keto friendly frosting. Or put a layer of my tiramisu low carb whoopie pie filling in between two. You can also sprinkle on some chocolate chips too.

You can spice up the cinnamon roll waffle batter by adding ginger, nutmeg, and cloves. I called this one spice cake waffles as it has a similar taste to spice cakes. Pair it with the optional cream cheese frosting for a mini layered spice cake.

How to clean a Dash mini waffle maker

Because of the size, the Dash mini waffle maker is much easier to clean. To get into all the crevices, it’s best to wash it with hot soapy water using a kitchen scrub brush. Then just rinse it under cool water.

Other keto recipes to serve one or two people

If you don’t want to deal with leftovers, give these other recipes a try! 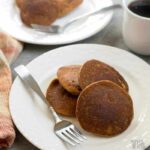 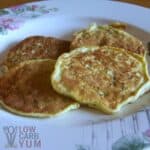