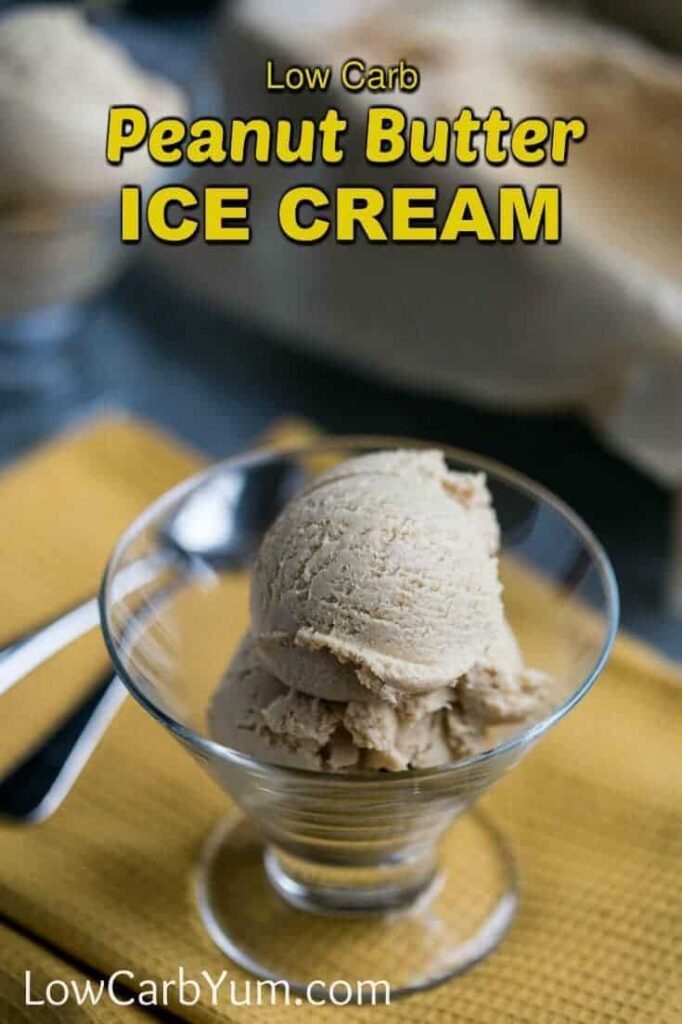 So, to be true to my sugar free living, I dusted off my old Cuisinart ice cream maker. Then, I made a peanut butter low carb ice cream recipe.

The machine I have is the kind that uses a gel so you don't need ice cubes and salt. But, the container needs at least a day in the freezer before it can be used.

I am an impatient person which is why my ice cream maker isn't used as much as it should be. In order to make a low carb ice cream recipe, it needs to be planned at least a day in advance. That allows the gel in the ice cream maker container to be fully frozen.

One day, I'll upgrade to an ice cream maker with a compressor, like this one, so I don't have to plan. It may be possible to make this peanut butter ice cream without a machine.

I haven't tested using a no churn method for making this low carb ice cream recipe. It's basically a method where you whip the mixture until fluffy with an electric mixer before freezing and stir every 30-60 minutes while freezing.

I processed the peanut butter mixture in the ice cream maker for about 20 minutes which made a nice soft serve consistency. The ice cream needs a couple hours in the freezer to be like regular hard ice cream.

However, being impatient, I was only able to wait an hour before sampling. So, my first serving was somewhere between soft and hard ice cream.

The addition of xanthan gum keeps the ice cream thick so it holds together better and doesn't turn milky. I was afraid to use erythritol because it can crystallize so I used an inulin based sweetener.

Feel free to experiment with whatever sweetener you happen to have on hand, but powdered ones would work better than granular as they dissolve faster. And, I find mixing sweeteners has the best taste.

I have not experimented a lot with using concentrated liquid sweeteners in a lot of homemade low carb ice cream. But, I did use liquid sweetener drops in my egg fast vanilla frozen custard.

After experimenting with this low carb ice cream recipe a little, I found that adding in some whey protein helps give a better texture. It also bulks up the mixture when using a concentrated sweetener like stevia or monk fruit.

Using the whey protein is completely optional if you are using a bulk sweetener. You can leave it out if you prefer or if you don't have any on hand.

I only used it to bulk the recipe up so I could cut back on the bulk low carb sweetener. Adding in egg yolks may be another idea they are a great ice cream stabilizer.

It's so nice to have peanut butter low carb ice cream recipe that I can enjoy during the summer months. And, it's a no cook recipe without eggs so the prep is fast and easy.

We all know that peanut butter goes well with chocolate. I like to this ice cream with hot fudge sauce and whipped cream on top.

You'll want to watch your portion size with this heavenly treat. I find that sweets and nuts can cause weigh stalls or gain if too much is eaten. Try to stick to one scoop and eat it slowly. It helps to use a small spoon, too.

As you can see, there's no reason why you can't find the time to make a low carb ice cream recipe. Although it's easiest to use an ice cream maker, I've found that a lot of recipes can be made without one. 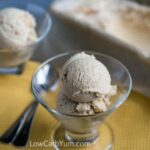 Whey protein can be added to make up bulk lost when using a concentrated sweetener like stevia. It will produce more ice cream without adding carbs. Monk fruit (lo han guo) can be added to enhance the sweetness without additional carbs. Makes 8 servings Net carbs per serving: 4g