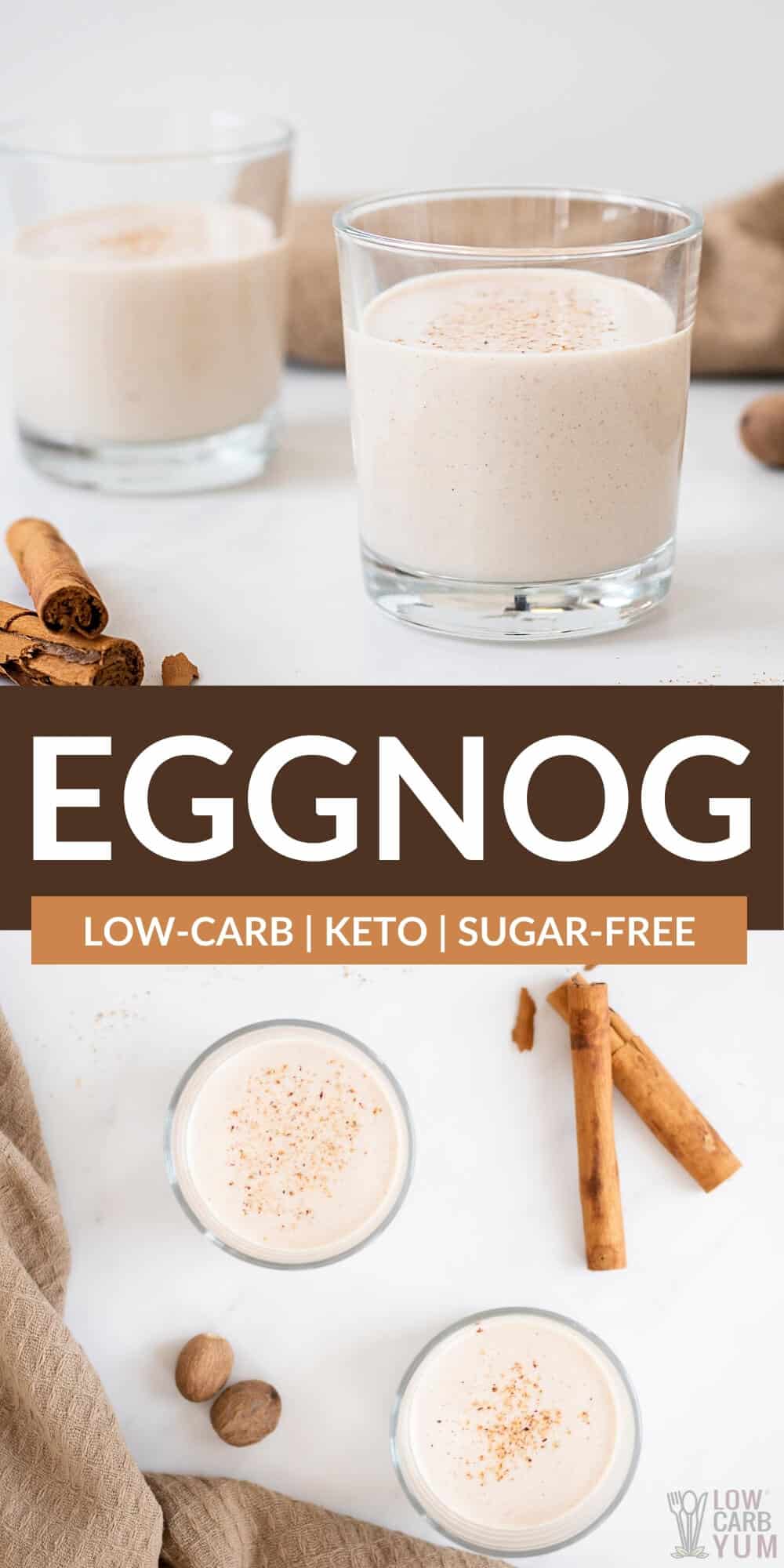 There's no sugar in this delicious keto eggnog recipe! It uses a low-carb sweetener instead. It's a rich blend of egg yolks, heavy cream, and almond milk along with traditional spices.

This year, I tried a new sugar-free eggnog recipe. The old recipe was made with all heavy cream making it high in fat and calories.

Now that I'm well past the middle age point, I've had to really watch my calories to maintain my weight. So I've been cutting excess fat where it doesn't make sense.

This version also has fewer eggs and I added in some cinnamon. I liked the lighter taste and cinnamon flavor. My original low-carb eggnog was way too heavy with fat.

With fewer calories, this recipe is a much better choice if you want to watch your waistline and it tastes just as good. When I'm trying to lose a few pounds, I always find that cutting fat helps as it's better to burn stored fat.

The best part of the recipe is that you don't need a lot of ingredients to make eggnog. In fact, you probably have everything you need in the kitchen already.

To keep the fat and calories at a minimum, the base is made up of mostly almond milk. Make sure you use the unsweetened kind to keep the drink sugar-free.

Cream is needed for a richer and thicker eggnog. It's also what makes the drink creamy.

I like to use a powdered sweetener blend like Swerve or Lakanto because it gives the best taste. But you can use any keto sweetener that you prefer.

Some eggnog recipes use whole eggs, but the consistency of the drink will be thicker using just the yolks. However, you can separate the eggs and whip the whites to fold in after cooking for a lighter texture.

Cinnamon is warming and fragrant. It adds a touch of autumn spice to the eggnog that really fits the holiday season.

Nutmeg adds a nice warm undertone to the drink. If you leave it out the taste will be a bit dull. In a pinch, you can use allspice instead or use half the amount of cloves.

Adding in vanilla flavor enhances the sweetness without the need to add in any more sweetener. You can leave this out if you use an unsweetened vanilla flavored almond milk.

This eggnog recipe is really easy to make but you will need to make sure you don't cook the yolks. You'll find a quick overview here. For the full instructions, you can scroll down to the recipe card at the bottom of the post.

In a small mixing bowl, whisk together the yolks and the powdered sweetener until foamy with air bubbles. Then set the bowl aside.

The base mixture is prepared by heating the almond milk, cream, and spices in a small saucepan. Cook over medium heat until a low boil is reached.

Before adding the egg yolk mixture to the hot base, it needs to be warmed up to prevent it from cooking into solid pieces. If you aren't careful with the temperature, you could end up with an egg drop soup.

To heat the egg yolk mixture, slowly stir in a couple tablespoons of the hot mixture in while whisking quickly.

Add Yolk Mix To Base

Once the yolk mixture has been tempered, gently add it to the hot mixture in a thin stream while whisking it in. You need to be very careful not to heat the yolks too quickly.

To ensure the egg yolks are properly cooked, the entire mixture is cooked on a lower heat for 6 to 8 minutes while stirring frequently. You'll want to keep the heat low enough to prevent a boil.

When the cooking is done, stir in the vanilla extract. Chill completely in the refrigerator before serving.

Before getting to the recipe and instructions, I wanted to share a few frequently asked questions about making homemade keto eggnog.

Can I make eggnog in the crock pot?

If you don't want to stand over the stove, this sugar-free eggnog recipe can easily be prepared in a slow cooker.

Just whisk together the egg yolks and sweetener in a 4 quart crock pot until smooth. Then whisk in the almond milk, heavy cream, cinnamon, and nutmeg. Cook on low for 1.5 to 2 hours, whisking several times, until mixture has thickened enough to coat the back of a spoon. Remove heat and stir in the vanilla.

How long does it keep?

Eggnog will last 5 to 7 days in the refrigerator. You can also freeze it for 4 to 6 months if you want it to keep longer.

What are the signs of bad eggnog?

The quality of the homemade eggnog really depends on the freshness of the ingredients used. If the liquid has become lumpy or has an unpleasant odor, it's likely gone bad and should be disposed.

If you're looking for more delicious keto treats to enjoy in fall, try one of these other low-carb holiday recipes. 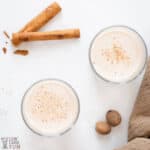 If the yolk mixture gets too hot, the egg can scramble or curdle. If you find cooked egg pieces in the liquid, they can be strained out using a fine-mesh sieve. Use the whole eggs. The egg whites can be whipped and then folded into the eggnog after it's cooled down for a lighter texture. Spike it. If you want an adult version, just add in some rum to taste. I like to add 1 ounce rum to 5 ounces of eggnog.