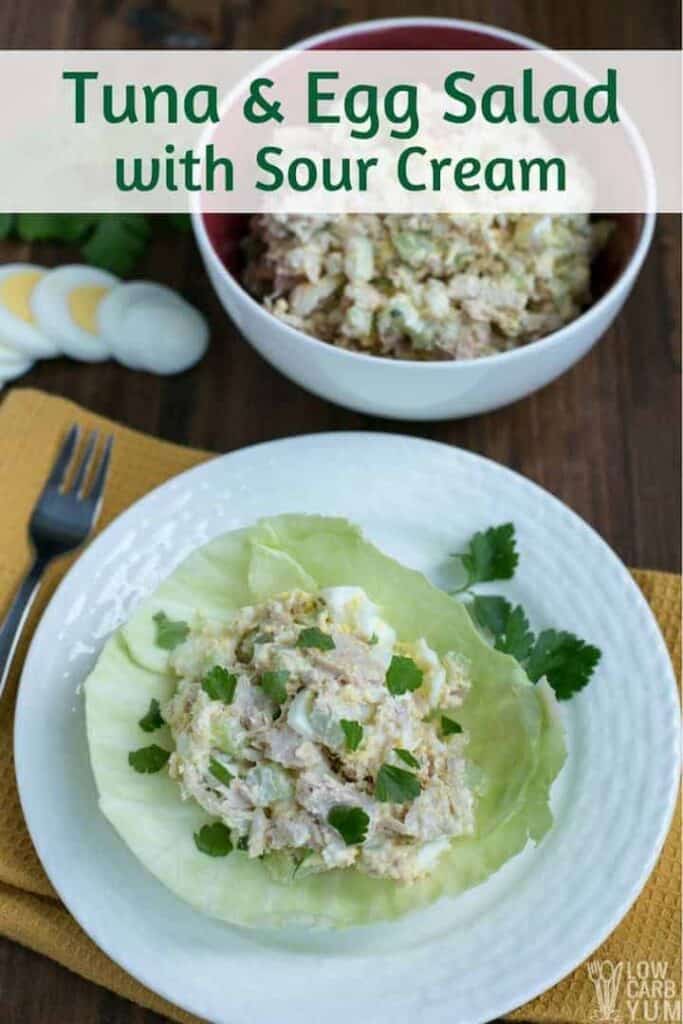 An easy tuna egg salad with sour cream is hard to beat. Find out how to make the best keto tuna salad recipe for low carb sandwich wraps.

You can’t always eat dessert for a snack. Not if you want to stay healthy anyway. Even if they are low in sugar and low carb.

So if you feel like you need a pick me up mini-meal in the afternoon, this tuna and egg salad recipe satisfies! It’s a high-protein and high smart fat cure for any in between meal hunger pangs.

However, I recommend learning how to do intermittent fasting and eating a bigger lunch. This way, you won’t need to snack between meals. So rather than snacking, enjoy the tuna salad recipe with egg as a part of a bigger lunch or dinner.

How to Make Tuna Salad with Eggs

If you already have hard cooked eggs, it should only take about 5 minutes or less to prepare this easy tuna egg salad. It’s a simple recipe that just combines the following ingredients in a large bowl:

If you’d like to make the recipe dairy-free, the sour cream can be replaced with additional mayonnaise. Or for a different flavor, try Greek yogurt in place of the sour cream.

Need a mayo substitute for the salad? Try using mashed avocado in place of the mayonnaise. You’ll love the taste of tuna salad with avocado and egg!

Tuna fish salad with egg and relish is also delicious. So you may want to add a little low carb dill relish into the mix too.

Other options include adding in some cottage cheese, chopped onion, or celery seed. There’s lots of possibilities so feel free to experiment with your own add-ins.

How to Serve a Keto Tuna Salad with egg

The health benefits of this low carb tuna salad with sour cream recipe will be for naught if you put the it on high-carb crackers or bread.

After all, that’s what most people do. They take a big scoop of it and load it onto something that’s going to quickly convert into sugar and raise insulin resistance.

In light of this, here’s my solution for a better low carb gluten free version. And it’s simple. Just use lettuce or cabbage leaf to make a keto tuna egg salad sandwich. Or buy a low-carb wrap.

Easy, right? This tuna and egg salad with sour cream is low in net carbs. Therefore, if you’re really hungry, you can have two low-carb wraps without the guilt! You can even enjoy tuna melts by using Soul Bread and grilling the sandwich.

Tuna is a lean source of protein and contains omega-3 fatty acids. But you definitely shouldn’t eat it everyday. As a large ocean fish, it’s a repository for mercury.

According to the Environmental Defense Fund, several species of the fish contain higher-than-average amounts of mercury. Mercury is a highly toxic substance that can cause both chronic and acute poisoning.

If you have children, definitely don’t send them to school everyday with tuna sandwiches. Kids have more sensitive nervous systems. Plus, their organs are still developing, which makes them more vulnerable to mercury’s negative side effects.

Are you very concerned about mercury? Then keep in mind, cans of tuna come in two main varieties.

Chunk light is the first. The second is solid tuna (also known as chunk white). Solid/chunk white is albacore tuna.

EDF says that all the canned white variety is albacore. Its mercury levels are almost three times higher than the smaller skipjack tuna, used in most canned light products. Therefore, go with the light version for this tuna fish salad recipe with egg.

Guidelines on consumption, according to the EDF, is up to three, 3-ounce portions per month for kids 6 and under. As for older children and adults: once a week is fine.

The EDF says to be aware that labels advertising ‘gourmet” or “tonno” are actually bigger Yellowfin tuna. Yellowfin has about the same amount of mercury as albacore.

So remember to go with canned light tuna. It’s considered the safer choice, containing 0.12 parts per million of mercury.

Some people who are new to the low carb lifestyle carry with them nutritional misconceptions. And one common one is that eggs, especially the yolk are unhealthy.

Who can blame them? There’s so much conflicting advice….

One decade eggs are healthy, the next decade, health experts say they’ll kill you. And now, it seems we’re back to eggs being ok for you.

So which is it?

Organic pasture eggs are a very healthy food, yolks and all. While the egg whites contain  protein, the yolks contain most of the nutrients.

In fact, the yolks hold half the protein found in a whole egg. They also contain essential B vitamins, omega-3 fatty acids, and an antioxidant that promotes eye health (lutein).

Furthermore, egg yolks are rich in the trace mineral, selenium. There’s also a good amount of phosphorous, all the fat-soluble vitamins and other vitamins and minerals.

Just keep in mind that if you don’t do a lot of exercise, high-protein meals can backfire on you. Even though this tuna and egg salad with sour cream recipe is low in carbs, theoretically, some of the protein can convert into glucose.

While you shouldn’t be overly concerned about this, I just want you to be aware that if you’re trying to stay in ketosis, it is a small possibility.

That’s because when your body doesn’t need any more dietary protein, it will convert some of it into glucose for stored energy.

Another nutritional concern in this tuna and egg salad with sour cream recipe applies to those who need to watch their sodium intake.

Celery is one healthy veggie that contains a relatively higher amount of sodium in comparison to other veggies. But if you’re cutting out processed/packaged foods you should be able to eat a few stalks of it without worrying. 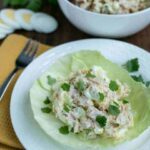 Relish is a good add in. Mashed avocado works well as a substitute for the mayonnaise and or sour cream. For dairy-free, sub out the sour cream with mashed avocado or use all mayonnaise. Other add-ins to try: