A traditional au gratin dish is topped with breadcrumbs, along with cheese. Then it’s cooked until perfectly golden brown. But using zucchini and skipping the crispy topping makes it a fantastic low carb side dish.

Now, when most people think of au gratin, the dish that comes to mind is potatoes. But potatoes, in my opinion, are at the top of the list for being one of vegetables to avoid. That’s because the starch from potatoes can rapidly metabolize into sugar.

But I’m here to tell you that it’s not necessary to make a traditional-tasting au gratin dish with potatoes. Just sub it out for a healthier veggie like I do in this keto zucchini au gratin.

But before getting into the recipe, I want to tell you why I love cooking with this specific veggie.

You bet! Zucchini is one of the best low carb vegetables. One medium-sized zucchini has about 6 grams of carb of which 2 grams are fiber. And since you would never eat a whole one, a serving should only add one or two grams net

If you’re following a ketogenic lifestyle, it’s definitely one of the best low-carb veggies for a keto diet. So without further ado, let’s get cooking….

How to make a keto zucchini au gratin

If you want to feed your hungry family or a dinner party of 8, here’s what you’ll need:

To make it, the first thing you need to do is in an oven-proof skillet, over medium heat, melt the butter. Then, add the garlic and onion and cook until fragrant, about 2 to 3 minutes.

At this point, you’ll want to add the almond milk (or cream). Place on simmer and continue to let it cook until it starts to boil. But don’t turn the stove top off just yet.

At this point, you’ll want to delicately and slowly add half the shredded cheese. Then stir until it melts.

Next, stir in the veggie. All the slices should be soaked and covered in the sauce. Stir frequently and cook on simmer setting for another 5 minutes.

Now it’s time to add the rest of the cheese. And the final step in preparing this zucchini gratin is baking it in the oven at 400 for about 20 minutes until the top is browned.

I tested out a dairy-free cheese in the recipe. But it didn’t melt well in the oven. I’d be curious if any of you have solutions to that.

The great thing about this zucchini au gratin dish is it’s gluten-free as there’s no bread crumbs. But I suppose seasoned crushed pork rinds could be used make it more of an authentic style dish and still keep it keto. You can also used crumbs from toasted keto bread.

I use the veggie many of my recipes. Turkey Zucchini meatballs? Check. Zucchini nachos? Nailed it.

I’ve also transformed the nutrient-dense, low-calorie veggie into a healthier french fry, pizza slices, and cheese wedges. And I’ve of course created several recipes with it using zoodles like my zucchini noodle casserole.

Looking for another recipe to use up your zucchini? Check out my zucchini chicken casserole. 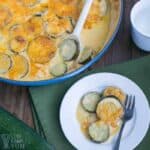 I used dairy free cheese which didn't melt well in the oven. Real cheese should melt and get gooey while baking.