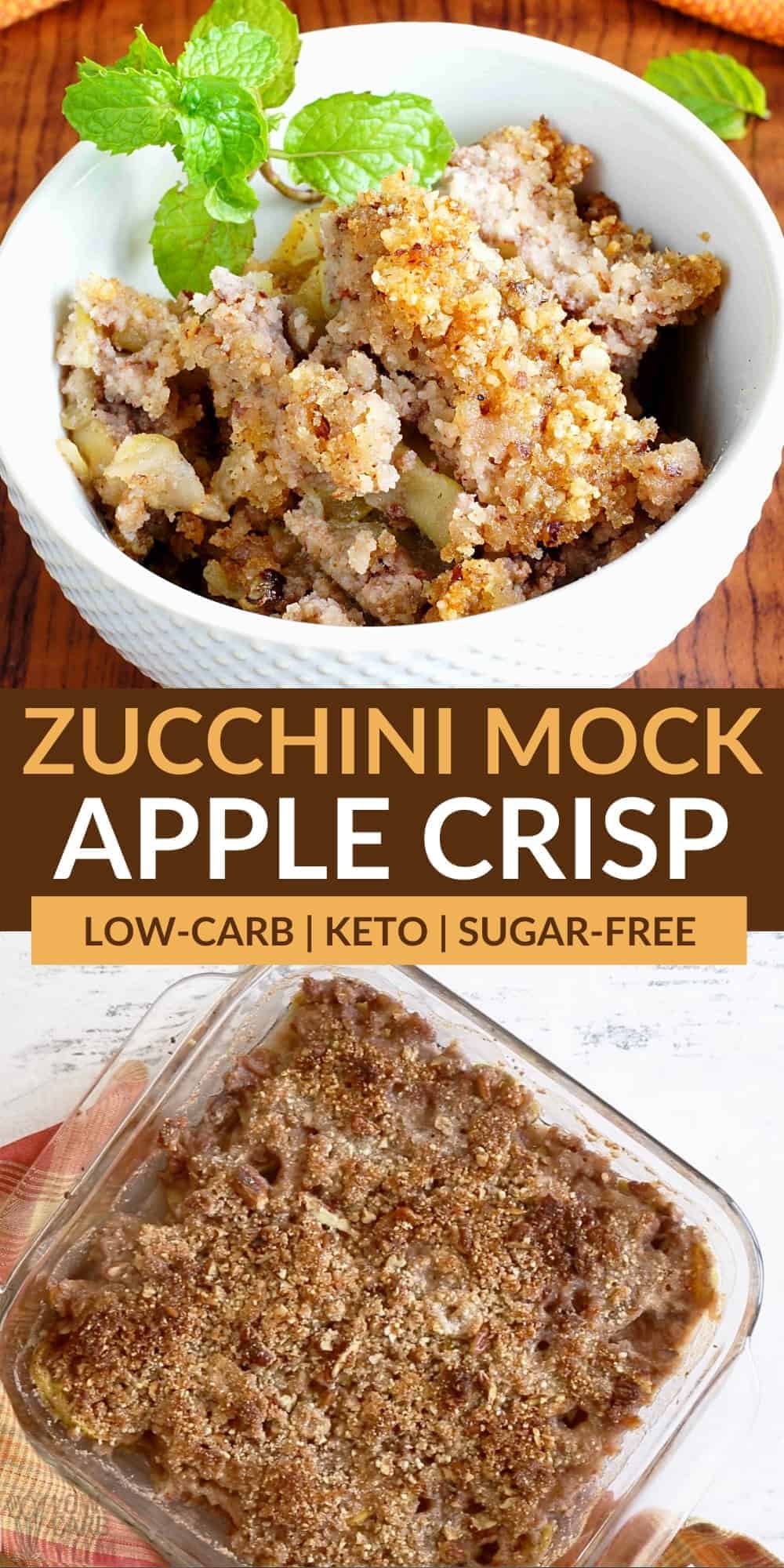 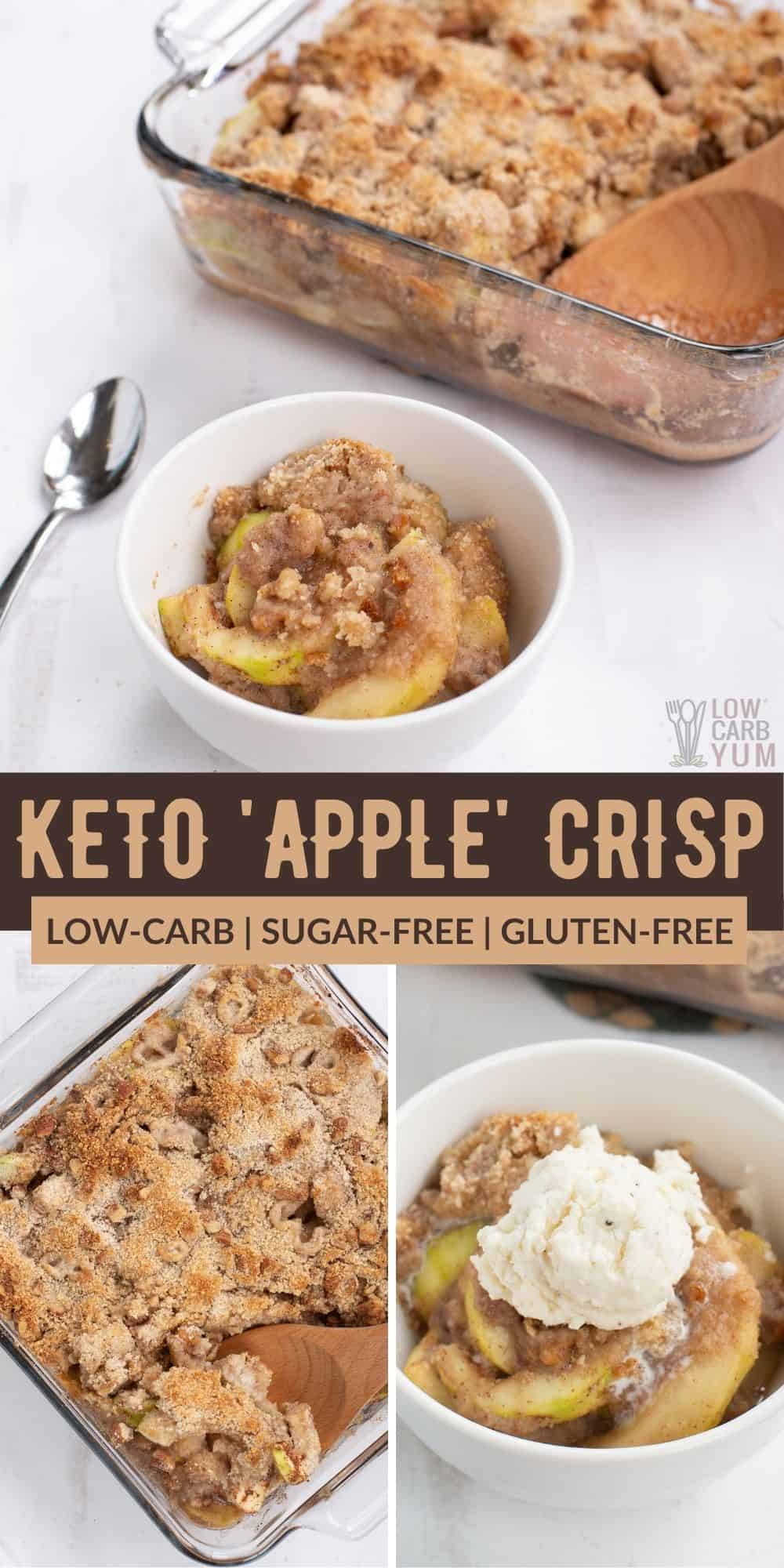 This easy and delicious low carb keto apple crisp doesn’t use any apples! To keep it keto friendly, the recipe is made with zucchini but your taste buds will never know the difference!

Sweet and tender pieces of sliced zucchini can have the flavor of apples by adding a sweetened spice blend. You’ll get all the taste you love without the unwanted carbs.

The delicious keto apple dessert is a simple and easy way to enjoy the crunchy, sweet flavor of apples on a low-carb diet. It's also a tasty way to get in your daily does of vegetables.

If you are trying to get your family to eat more veggies, this treat is a great way to do it. They may not even be able to tell you didn't use real granny smith apples or fuji apples in the mock apple filling.

You only need a few basic ingredients and a little time to make this low carb apple crisp recipe. In fact, you may already have everything you need right in the kitchen!

You can also add a keto-friendly thickener like xanthan gum to make a thicker filling and apple extract for a stronger apple flavor.

I use a nutty topping for the zucchini apple crisp. It’s just a blend of these ingredients:

To make the recipe, simply prepare the zucchini mixture then add the crumb topping. Then simply bake it in the oven. That's it!

Before using the zucchini, it needs to be peeled and sliced in half lengthwise. Then the seeds need to be removed using a spoon to scrape them out.

Cut the zucchini into half moon slices to look like apple slices. The summer squash pie filling will look just like apples!

Once the zucchini is sliced, it’s mixed with lemon juice, cinnamon, nutmeg, sweetener and optional apple extract. Then it’s poured into a baking dish.

Combine the dry ingredients in a mixing bowl. Then cut in the butter using a pastry cutter until the mixture is crumbly.

Sprinkle the topping over the filling and baked until the zucchini is tender. It takes about 45 to 50 minutes to cook completely.

This keto zucchini apple crisp is perfect served warm or cold. When warm, it tastes great with a scoop of keto vanilla ice cream on top. Topping off with some whipped cream is also a great option.

It’s easy to modify this recipe into a keto mock apple pie. Just add my almond flour crust or coconut flour crust and bake in a pie pan. You’ll end up with a low carb Dutch apple pie!

If you’d rather have a traditional apple pie, add a top crust too.

Before getting to the printable recipe card, here are some answered to questions people have asked about the keto apple crisp dessert.

Apples are avoided on a keto diet because even a small apple can have over 20 grams of carbs. That’s twice the limit for what’s recommended for each low carb meal and it’s likely to knock you out of ketosis!

What can be used for low carb mock apples?

This keto apple crisp is a must try low carb dessert for late summer or early fall! It’s definitely something you'll want to make over and over again. For more delicious treats, try one of these: 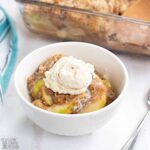 Do not slice zucchini too thin or it will become mushy and release more water during baking. A pie crust can be added along with baking in a pie pan to make a keto friendly Dutch apple pie. Chayote squash, jicama, or yellow squash can be used for the mock low carb apples instead of zucchini.