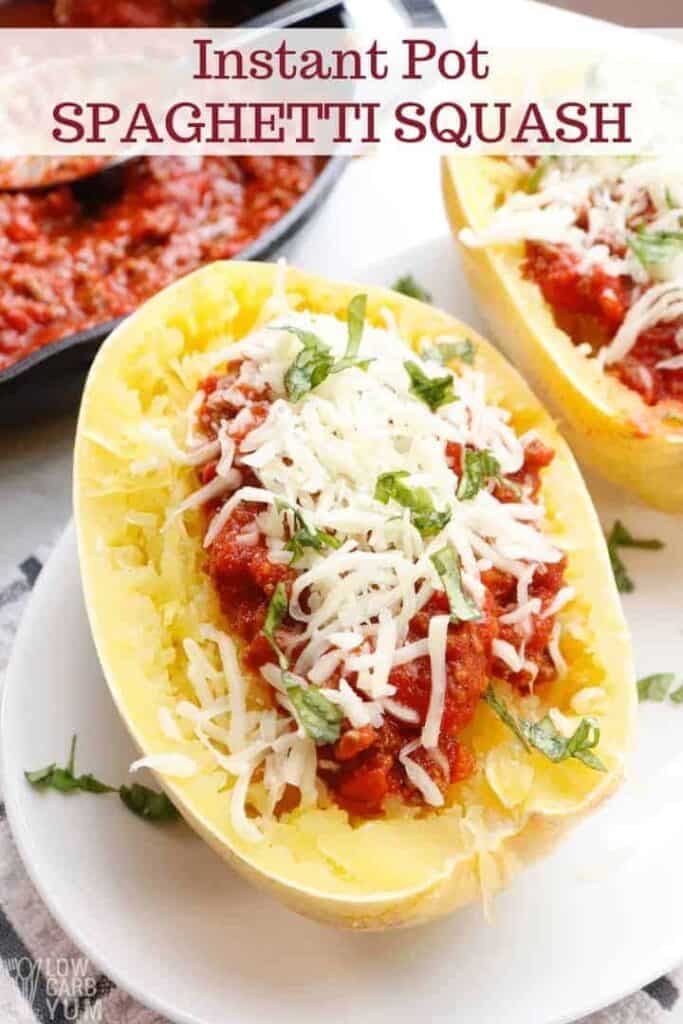 You may have noticed that I’ve been into the quick and easy low carb recipes lately. I’ve been working on my very long list of things to do. So, I’ve been trying to keep my cooking to a minimum with 30 minute keto recipes.

Spring is also the time I usually set out to lose those extra pounds I gained over the winter. It seems to matter how hard I try, it happens every year.

Last year I experimented with an Egg Fast so I may be trying that again soon. Have you tried egg fasting?

Getting Started with Electric Pressure Cooking

To help me spend less time in the kitchen, I recently purchased an Instant Pot. Do you have one? It's an electric pressure cooker that's much safer than the ones designed for the stove top. And it's perfect for making Instant Pot spaghetti squash!

I do have a large pressure cooker that cooks on a stove. But, I have never used it because I never took the time to learn how to use it properly.

To get a feel for pressure cooking, I started with something easy. I wanted to know how to cook spaghetti squash, so I took some advice from Nom Nom Paleo.

I wondered if the squash could be cooked whole. However, after reading information online, it seems like cutting it in half results in a better texture and faster cooking time.

I was a little nervous about cutting it raw as I've had trouble before. That's why I preferred cooking it whole in the slow cooker as shown in my post for crock pot spaghetti squash.

Turns out that I was making the cut a lot harder by doing it lengthwise rather than in the middle. My knife went right through the center.

If you go for the average size, it's tough to cook spaghetti squash whole in the Instant Pot because it doesn't fit. And, cutting it lengthwise would have difficult to squeeze into the pot with the cut side up. So, it makes sense that you need to cut the squash in half through the middle.

Out of all the ways to cook spaghetti squash that I have tried, the Instant Pot wins hands down. It resulted in the best texture with the least amount of time needed for cooking.

It does take some time to build up pressure, typically around 15 minutes, so it isn't super fast like the microwave. But, I prefer the texture over microwaved spaghetti squash.

And Instant Pot spaghetti squash is a great option for keto noodles when reducing carbs in standard recipes. It’s also a fantastic pasta option to include in low carb casseroles.

How to Cook Spaghetti Squash in the Instant Pot

Here are the steps I used to cook spaghetti squash in the Instant Pot:

You can adjust the time to your preference. You could go anywhere from 7-10 minutes. I thought 10 minutes resulted in a nice texture. If you like it a bit firmer, try 7 minutes.

I love Instant Pot spaghetti squash served with a simple meat sauce made with a low carb marinara sauce. You can also use a commercially prepared sauce if you like. Just look for one without any added sugar.

The jarred kind is definitely more convenient for busy people. A brand that I use often is Rao’s because the carb count is low.

Need some ideas for using cooked spaghetti squash? My favorite favorites are linked below:

I also put together a keto recipe collection using spaghetti squash. But the easiest recipe is to just top the strands with meat sauce using the recipe below. Be sure to leave a comment to let us know what your favorite way to serve it is. 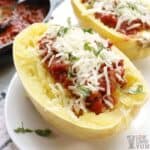 « What is MCT oil and where does it come from?
Gluten Free Strawberry Rhubarb Crisp (Keto, Paleo) »