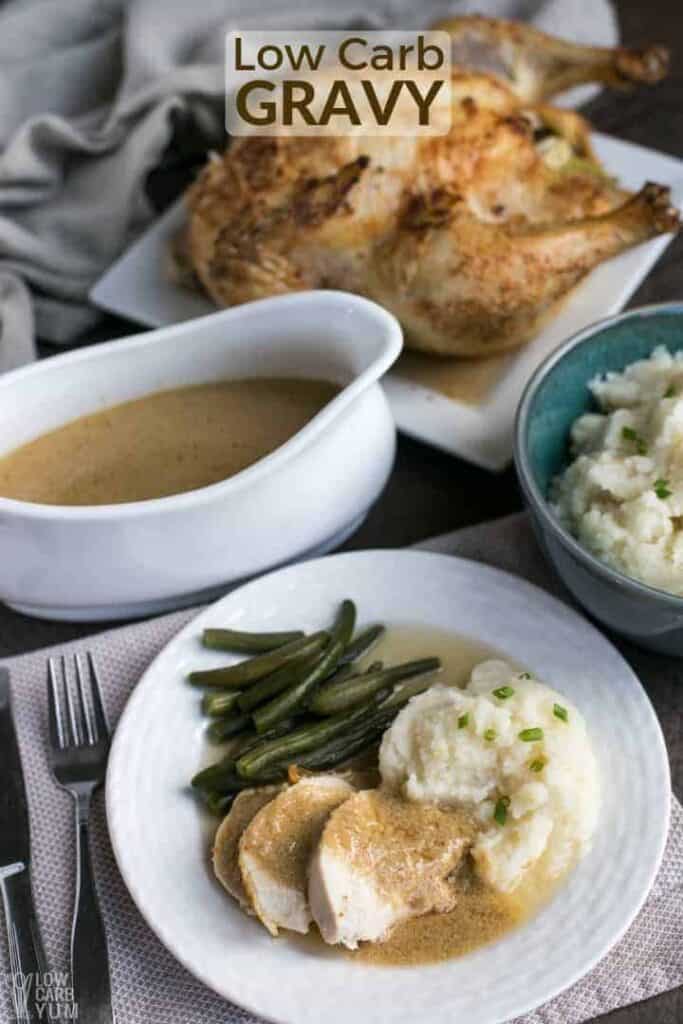 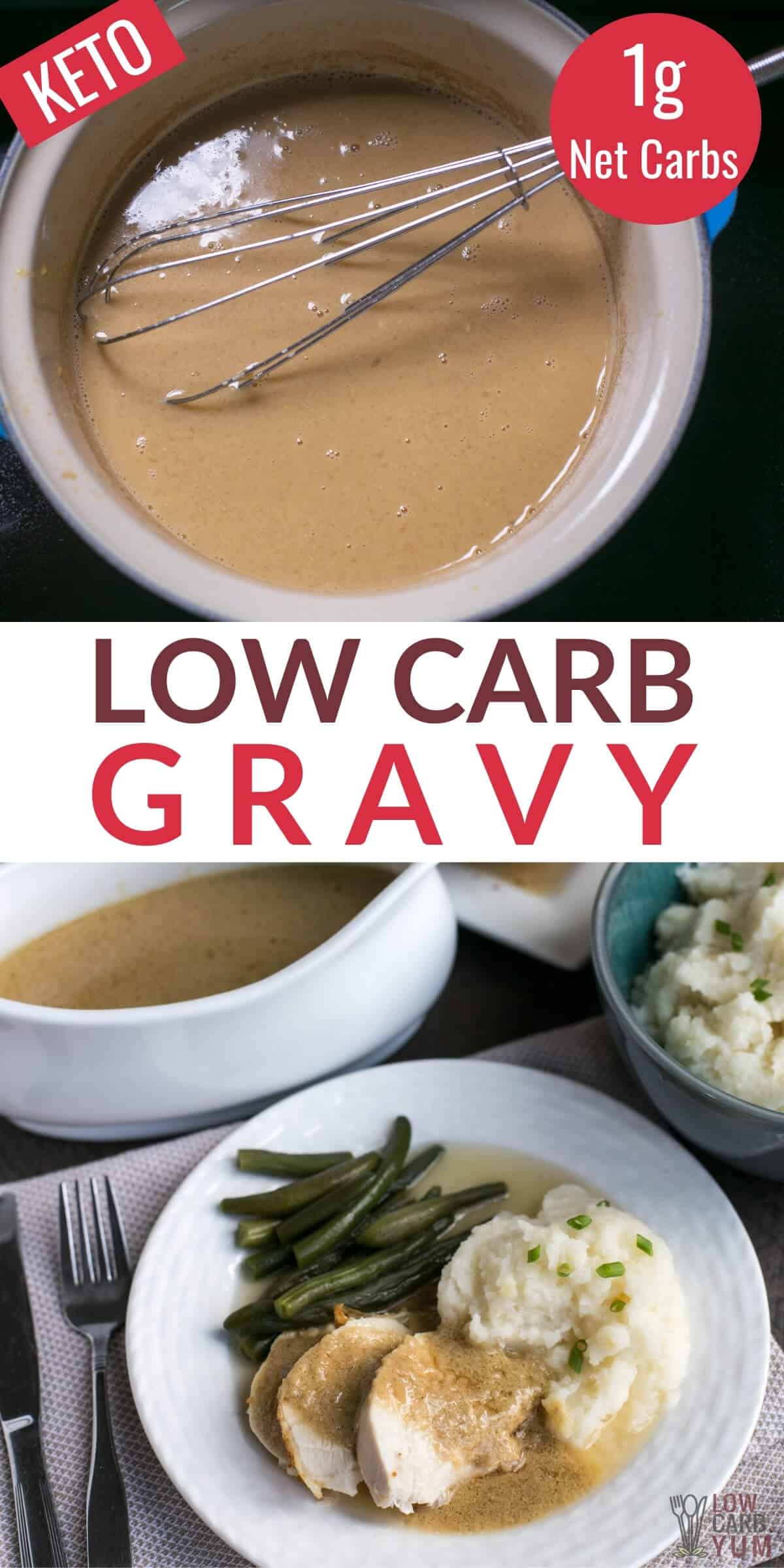 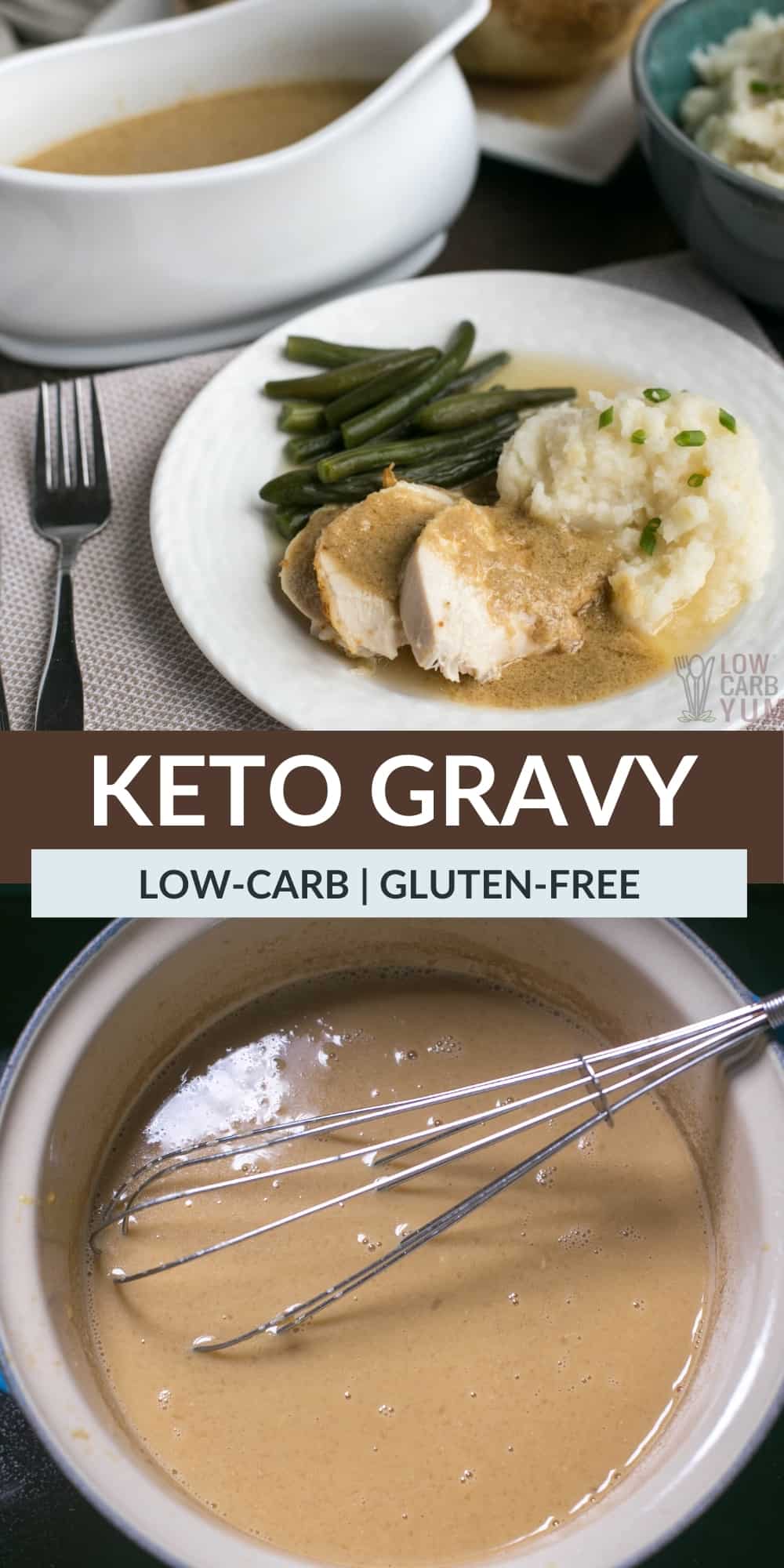 Don't skimp out on the gravy this Thanksgiving! Make a deliciously juicy keto gravy recipe using alternative low-carb thickeners to drizzle over the top of roasted meats. Although coconut flour and almond flour may work, there are much better choices for flourless gravy- let's find out!

One of the best parts of a Thanksgiving meal is covering the turkey in salty, meaty gravy. You don’t have to give that up just because you are on the keto diet.

Most traditional gravies are made with flour, a type of fat, and milk or water. Replace that recipe with this one! It tastes just like the classic gravy you remember, but it only has 1g net carbs in each serving.

You can use this recipe all year long. It’s a very versatile and all-occasion gravy that tastes delicious on top of pork, turkey, chicken, or steak.

If you're looking for a creamy gravy, check out my low carb biscuits and gravy recipe.

The ingredients for this gravy are in the printable recipe card at the bottom of this post. First, here is a bit more information about what I used.

You’ll need some type of fat. The drippings from freshly roasted meat work best for the gravy!

But, you can use a pre-made meat stock if you want gravy for mashed cauliflower or turnips - without having to make a roast.

I like to make my keto gravy with egg yolks as the main thickener, along with some finely chopped onions, which add in flavor.

You could leave the onions out for a zero-carb gravy, but there’s not a lot used, and it’s worth adding them for a better taste.

Add some garlic and onion and your favorite seasonings to the gravy. In this recipe, I just used salt and pepper.

To thicken it, use some egg yolks and either butter-flavored coconut oil or butter.

How To Make Gravy Without Flour

All of the exact steps are in the printable recipe card at the end of this post. First, here are some additional tips and a quick overview of the recipe.

To start the gravy, take the strained pan drippings from a roast or meat stock and reduce the liquid by boiling it down for about 10 minutes.

Next, add the onions to the liquid and puree. You can add it all to a blender to mix or use an immersion blender.

Note: Of course, you’d skip this step if omitting the onion.

Then, two egg yolks are tempered with the hot liquid and then slowly whisked into the pot with the rest of the hot gravy liquid.

To help thicken things up, butter or coconut oil is whisked in next.

You can simmer the gravy until it starts to thicken, but it should continue to thicken as it cools.

What To Serve With Keto Brown Gravy

Brown gravy is typically made by thickening roasted meat juices with wheat flour or cornstarch. So the key to making it a keto-friendly sauce is to thicken your gravy with a low-carb thickener.

A keto beef gravy is perfect for serving over low-carb roast beef and mashed turnips or cauliflower. You can also dress up the sauce by adding in things like mushrooms or onions!

Before we get to the recipe in the printable recipe card, here are some questions people often ask about making low-carb gravy.

Regular gravy is usually thickened with wheat flour or cornstarch. We all know wheat flour isn’t low in carbs. But, is cornstarch keto?

At about 7 grams of carbs per tablespoon, cornstarch can be a low-carb option if a small amount is used. However, most people on a keto diet avoid grains and excess carbs. So you’re better off not using it.

What are other ways of thickening gravy that are low in carbs?

In the past, I’ve made xanthan gum gravy. And sometimes, I’d blend xanthan gum with guar gum but, I’m not a fan of using either of those “gum” thickeners these days.

Instead, I prefer using glucomannan!

However, all of these low-carb thickeners can make your sauce turn into a thick pudding. So you need to add just the right amount to prevent the liquid from thickening too much, especially as it cools.

That’s why I decided to create an easy keto gravy that’s thickened with egg yolks, some puréed onions, and a little butter or coconut oil. Plus, the onion and butter not only thicken but add flavor.

Can you make gravy with coconut flour?

I’ve thought of using coconut flour to make a keto-friendly gravy but, the taste of the flour isn’t completely neutral, and it’s slightly sweet. It could be used as a thickener since it absorbs liquid creating a thicker sauce.

Therefore, you can add a small amount of coconut flour to this low-carb gravy recipe if desired. I would only add in a teaspoon at a time and give it some time to settle in before judging the consistency.

You can even omit or reduce the onions in the recipe by adding a little bit of this low-carb flour.

I’ve made a coconut flour gravy a few times, but the texture is somewhat clumpy. And, if you aren’t careful with the amount added, you’ll end up with something that looks more like porridge.

Can you make gravy with almond flour?

You may be wondering if finely ground almonds could be used as a keto thickener. Personally, I wouldn’t use them.

Although almonds are fairly neutral in taste, they do give a slightly nutty flavor that wouldn’t taste right. Plus, almond flour doesn’t mix in as smoothly into a liquid as coconut flour does. It tends to be more grainy.

But, if you don’t mind these issues, you can certainly experiment and give it a try. Personally, I’d go with coconut flour instead!

What are some other Thanksgiving recipes?

Holidays like Thanksgiving just wouldn’t be the same without a gravy boat on the table. Sure, you can eat your turkey and faux mashed potatoes plain when following a low-carb diet, but they taste so much better topped off with a keto gravy!

And, don’t forget the low-carb buns when planning your holiday meal! Plus, you’ll want to have a traditional low-carb pumpkin pie for dessert made with a flaky almond flour pie crust.

Be sure to check out the healthy Thanksgiving recipes collection I put together as well if you need more ideas for holiday dinners.

What do you use to thicken soups and sauces on a ketogenic diet? Is it just one thickener, or do you use a combination of them? I’d love to know what you prefer to use when making homemade gluten-free gravy that’s low in carbs.

Let me know in the comments!

Other Keto Sauce Recipes To Try

If you are looking for more low-carb sauces and dressings, check out some of these favorites: 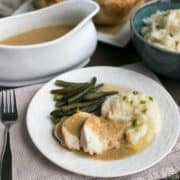 If the gravy is not as thick as you'd like, you can add in a little glucomannan, gelatin, coconut flour, or xanthan gum to get the right consistency. For a lower carb gravy, the onion can be left out, but another thickener like gelatin will likely need to be used or the liquid may be too thin.