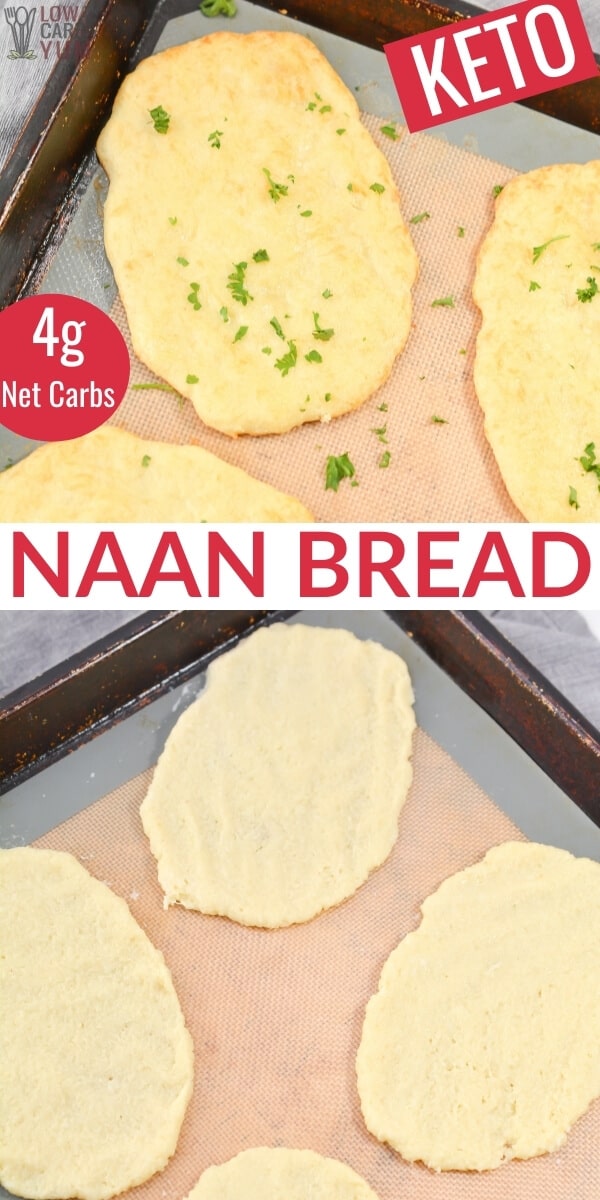 With only 4g net carbs per slice, this easy keto naan recipe is a must! Made with mozzarella cheese and almond flour, it's low-carb and gluten-free too.

If you never heard of or had a chance to try naan bread before, you are really missing out! It's a bread popular in Asia that typically goes with a curry (like this pork curry recipe), mopping up the spicy sauce in every bite.

Today, you'll find naan at Indian restaurants or in the bakery section of your grocery store.

My goal with this recipe was to create a bread low in carbs but still maintains the same flaky texture as traditional naan.

Traditionally, naan is made with flour, yeast, yogurt, and other spices. To make this recipe low-carb friendly, I used almond flour and mozzarella cheese instead of wheat flour and sour cream instead of yogurt.

Keep reading for some super-helpful tips, and then scroll down to the bottom for the entire recipe!

If you have ever baked a keto-friendly recipe before, you probably already have all the ingredients you need.

The best combination for this baked low-carb bread recipe is a lot of mozzarella cheese and some almond flour.

Out of all the low-carb flours available out there, I found that almond flour worked best to make this Indian naan bread.

Tip: Remember to use blanched almond flour, not almond meal. Almond meal is made with almond skins on them, so it will give the bread a gritty texture.

You need the eggs to help bind all of the ingredients together! I prefer to use large eggs, but the size really won't matter for the recipe.

Make sure to use unsalted butter! If you use salted butter, just cut back on how much salt you add to the bread (if you use any at all- my recipe doesn't call for any).

For this naan recipe, use full-fat sour cream. If you don't have any on hand, try replacing it with greek yogurt.

Don't forget the baking powder - that's what makes the bread flaky and helps it rise! I also added some garlic powder. You can add a sprinkle of onion powder, too, if you think it needs it.

How To Make Keto Naan Bread

The entire recipe is on the printable recipe card at the bottom of this post. First, here are some step-by-step photos of the naan recipe so you can make them along with me.

First, melt the mozzarella cheese in the microwave. Then, add it to the rest of the ingredients in a large mixing bowl.

At this point, I think using an electric mixer really speeds up the process. You can certainly mix it by hand, but that will take a lot longer.

When everything is mixed, form the dough into 8 even pieces.

Flatten the dough so that each piece is the same thickness - around ¼ inch thick. Place them on a silicone mat on a baking sheet and bake them for about 20 minutes.

When they are finished baking, they will have a golden brown color. to check for doneness, you can insert a toothpick and it should come out clean.

Brush some melted butter on each piece of the hot naan bread and sprinkle some fresh parsley on top! Yum!

What To Serve With Low-Carb Naan

Naan is typically served with Indian or middle-eastern recipes. I love to serve it with some homemade keto butter chicken for an authentic experience.

It will also taste amazing with some curry cabbage soup or stuffed keto cabbage rolls!

Another idea is to eat it at lunch! Add your favorite meat and dressing and use it as sandwich bread or a wrap.

Here are some questions people tend to ask about this recipe - see if your question is on the list.

Can you fry naan on a cast iron skillet?

Traditionally, naan bread is fried on a skillet, but I don't recommend doing that with this low-carb recipe. The outside might burn before the inside is fully cooked.

I prefer to bake the naan because it has the perfect texture without getting burned. However, you can brown the outside in a skillet after baking if you want.

How do you store low-carb naan?

Store this bread in a resealable bag or an airtight container. It will stay fresh at room temperature for 2-3 days or in the refrigerator for up to 5 days.

Yes! Since this is made with almond flour, it doesn't have any gluten in it at all.

Is this keto naan made with fathead dough?

No, this is not made with fathead dough. Fathead dough is a combination of mozzarella cheese, cream cheese, egg, and a type of low-carb flour (like almond flour). I did not use any cream cheese; I used sour cream.

There is a way to make fathead naan, but you will have to decrease how much mozzarella cheese you use.

Can you freeze keto naan?

Yes, this flatbread freezes really well! I recommend baking it and then freezing it.

Make a bunch of this low-carb naan flatbread and share it with people you know. They won't believe their tastebuds! It really is a surprising recipe.

It tastes just like fried naan but with so many fewer carbs.

If you enjoyed this keto naan recipe, then you will love these low-carb bread recipes too. They are gluten-free and made with low-carb flour! 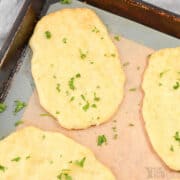 If your hands are wet, the dough won't stick to them as much. This is a very sticky dough, so this tip is super important. The naan will probably stick to a metal baking sheet, so make sure you line your pan with parchment paper or a silicone baking mat. Store this bread in a resealable bag or an airtight container. It will stay fresh at room temperature for 2-3 days or in the refrigerator for up to 5 days.