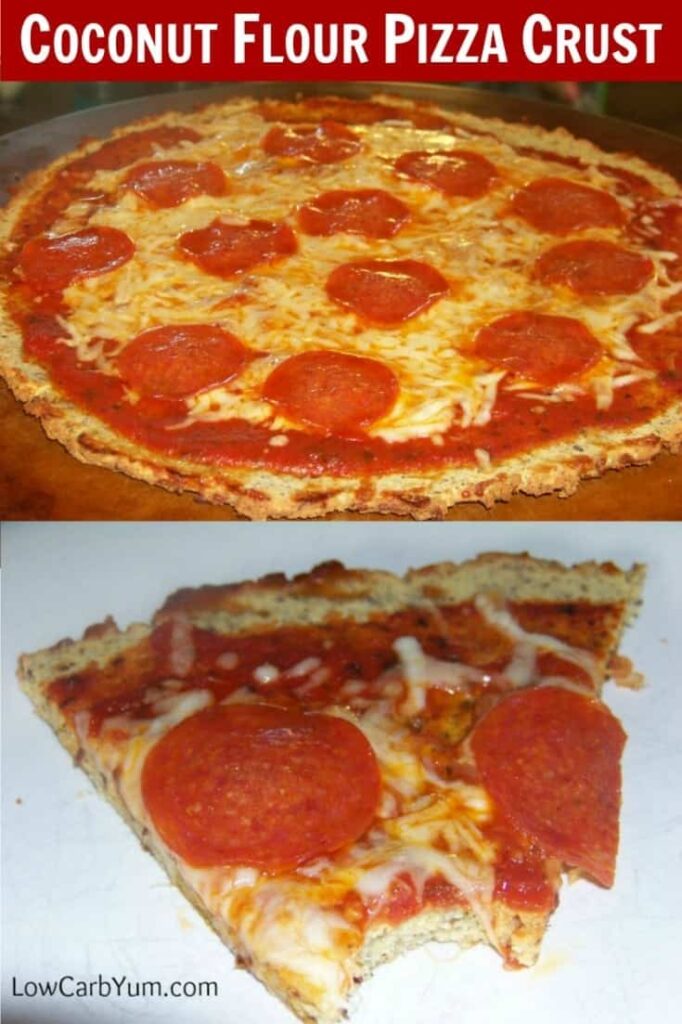 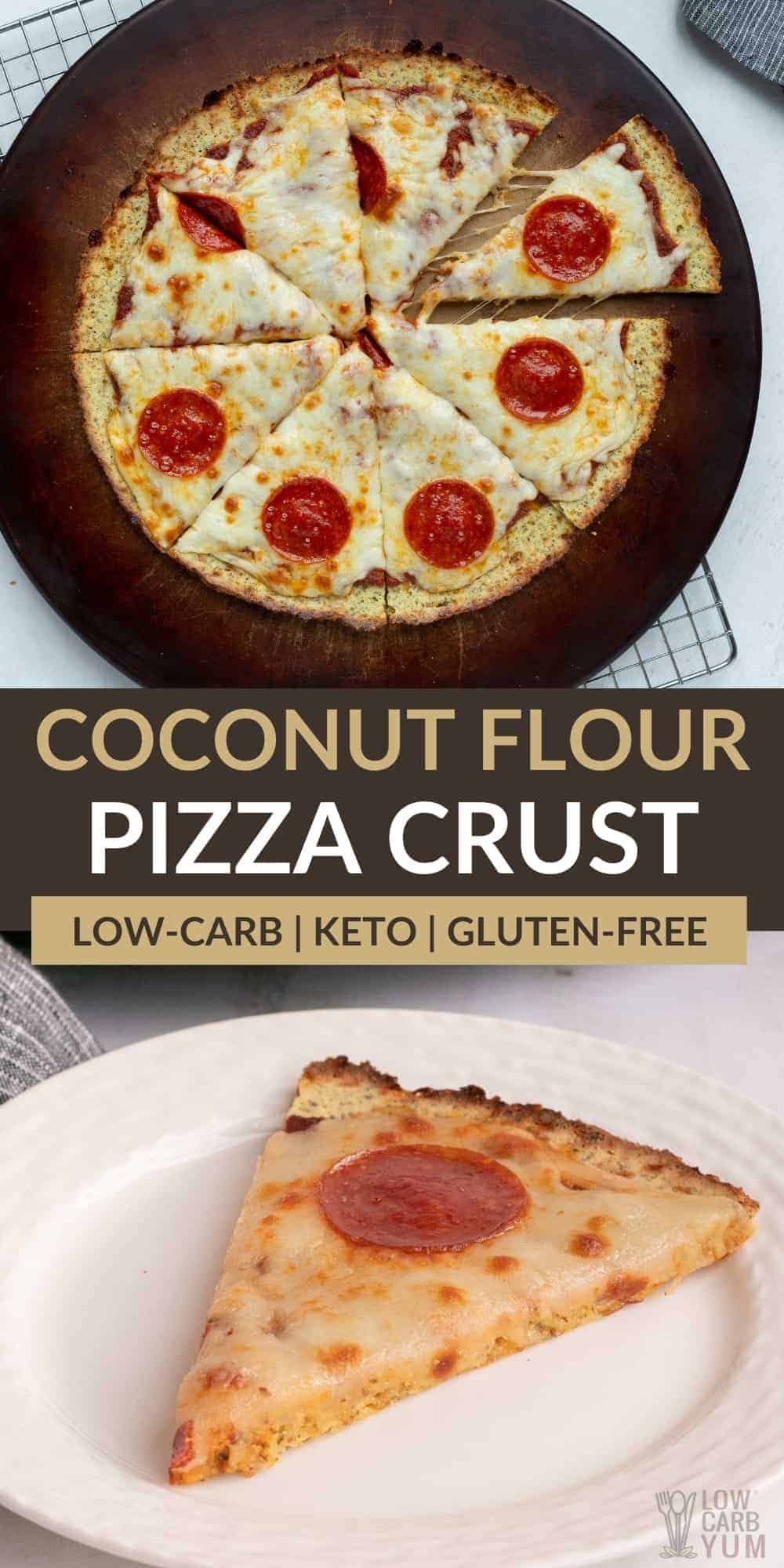 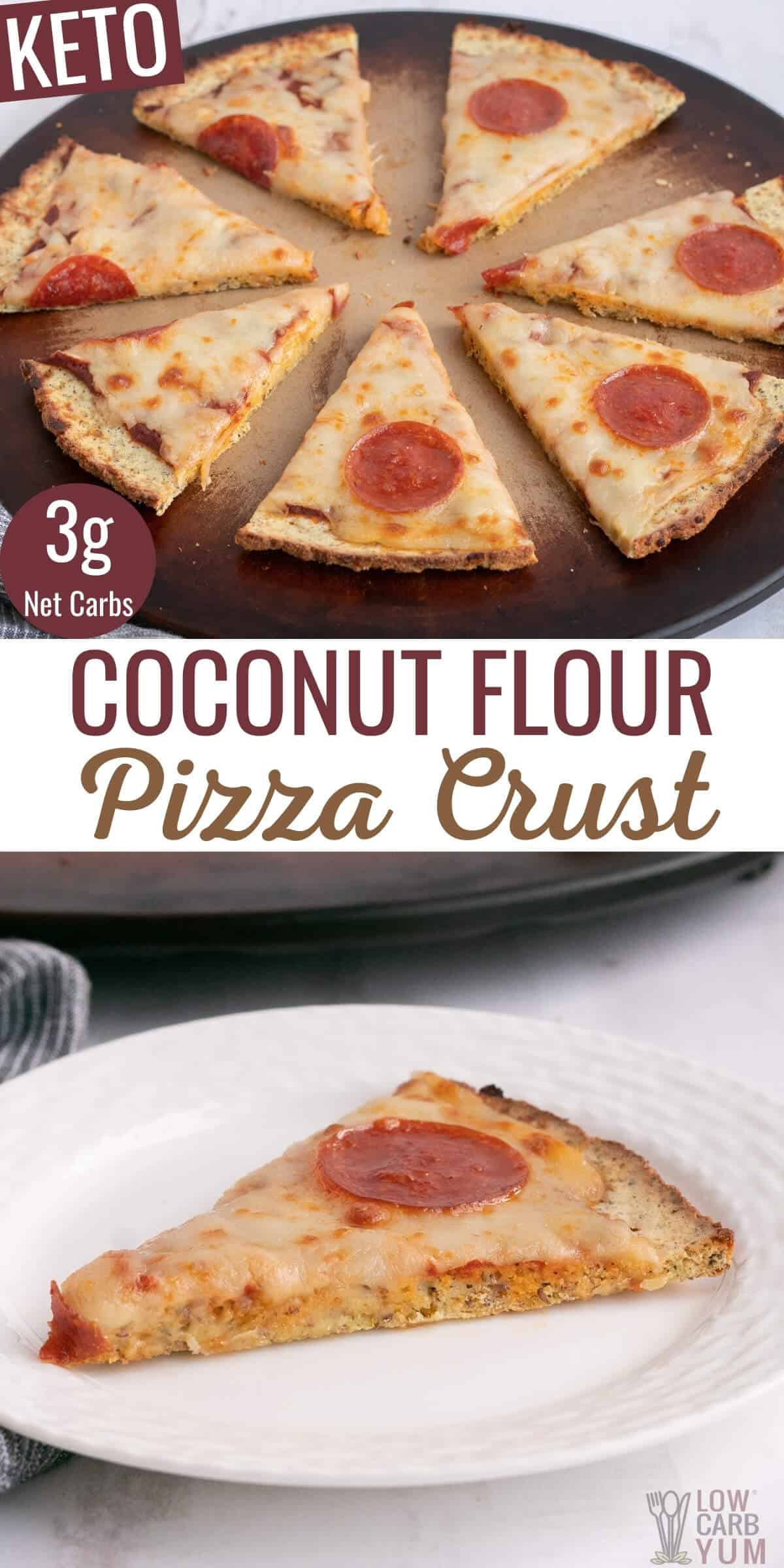 Interested in trying a low-carb and gluten-free meal that even a teenager will love? This coconut flour pizza crust will get a thumbs-up from anyone, even picky eaters!

When you really want a keto pizza recipe that is super-easy and doesn't feel like a ton of work, this pizza crust is perfect. It's made out of coconut flour - and even if you are scared to experiment too much, this is a really easy place to start.

This recipe makes a thin and crispy low carb pizza crust. You will love the crunch and the flavors that come out from it too!

There are lots of different ways you can make this pizza. Change the toppings and even change the size. Make one really large pizza for everyone or give them all their own mini-pizza. This coconut flour pizza crust recipe is perfect for all of it!

All of the exact ingredient amounts for the crust are in the printable recipe card at the bottom of this post. First, I have a few tips about the ingredients I wanted to share (along with any substitutions you can make).

I added ground flax seed to get rid of the sponginess in the coconut flour pizza crust. The added flax really made a difference and resulted in a much crisper crust.

I like pizza crust that is thin and crispy so the flax meal was a great addition. To fix the taste, I added more seasoning as well as a little olive oil.

I also added some eggs and two different types of cheeses - a combination of mozzarella and parmesan cheese. The parmesan cheese gives it even more crunch!

Here are a few cooking tips that will help you make the best pizza crust you have ever tasted!

All of the exact steps are listed in the printable recipe card at the bottom of the post. Before I get there, I want to share an overview of how to make coconut flour pizza crust.

The very first thing you will do is put all the ingredients (except the mozzarella cheese) in a food processor. Process them together until there are no more lumps.

Then, take it out and begin to gently fold in the shredded mozzarella cheese.

The next thing you'll do is spread the coconut flour pizza dough out on a greased or parchment paper lined baking sheet. Then bake the pizza crust.

After the top has a nice golden color, you will know it's fully cooked. Remove the coconut flour pizza crust from the oven and let it cool down before you add toppings!

This is a very basic keto bread recipe that you can use for a fun pizza night. When you are trying to think of things to serve with this coconut flour pizza, think about other pizza night foods.

This gluten free pizza crust would taste amazing with some buffalo chicken wings. You can also serve it with a crispy chopped salad!

This is a pretty simple recipe - and after you make it once, you'll want to make it again. Here are some questions people have about pizza crust made with coconut flour.

How do you store the cooked coconut flour pizza crust?

I've been making several of these keto pizza crusts at once so that I can save some for later. To keep them fresh, I place them in vacuum-sealed bags after cooling.

I like to freeze this coconut flour pizza crust shortly after baking. It makes it super easy to make a low carb pizza later.

To reheat the frozen crust, you don't even have to thaw it first. Just put your favorite toppings on top of the crust and bake at about 350 degrees until the cheese is browned.

Can you use almond flour instead of coconut flour?

If you want to use almond flour to make a pizza crust, follow this recipe instead. It turns out perfectly!

What can I use instead of a food processor?

There are so many different ways that you will use a food processor, that I suggest buying one. If you don't have one, you can also use a blender to combine all the ingredients to make the coconut flour pizza crust.

Do I have to pre-bake the coconut flour crust before I add toppings?

Yes, you definitely need to pre-bake the pizza crust before you add any pizza or breadstick toppings. This makes sure the crust will be crispy and completely baked before the toppings soak into it.

Even picky eaters won't be able to tell this is a low-carb coconut flour pizza crust. It doesn't taste like coconut flour. It has a ton of flavor! You can even use this crust to make a BBQ flatbread or any number of creative topping ideas.

I highly recommend making a few batches of this keto pizza crust and freezing them. You never know when the craving for pizza will hit, and you'll want to be prepared!

If you enjoyed this coconut flour pizza crust, you will love these keto pizza recipes too. These are some of my favorites: 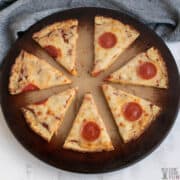 Not a fan of flax seeds? You can add almond flour, chia seeds, or psyllium husk instead. The psyllium is actually what I'd recommend as it adds gumminess to the coconut flour pizza  crust without a noticeable taste! To make low carb breadsticks. Just shape the dough into a big rectangle and slice after baking. We like to serve the breadsticks with homemade marinara sauce.