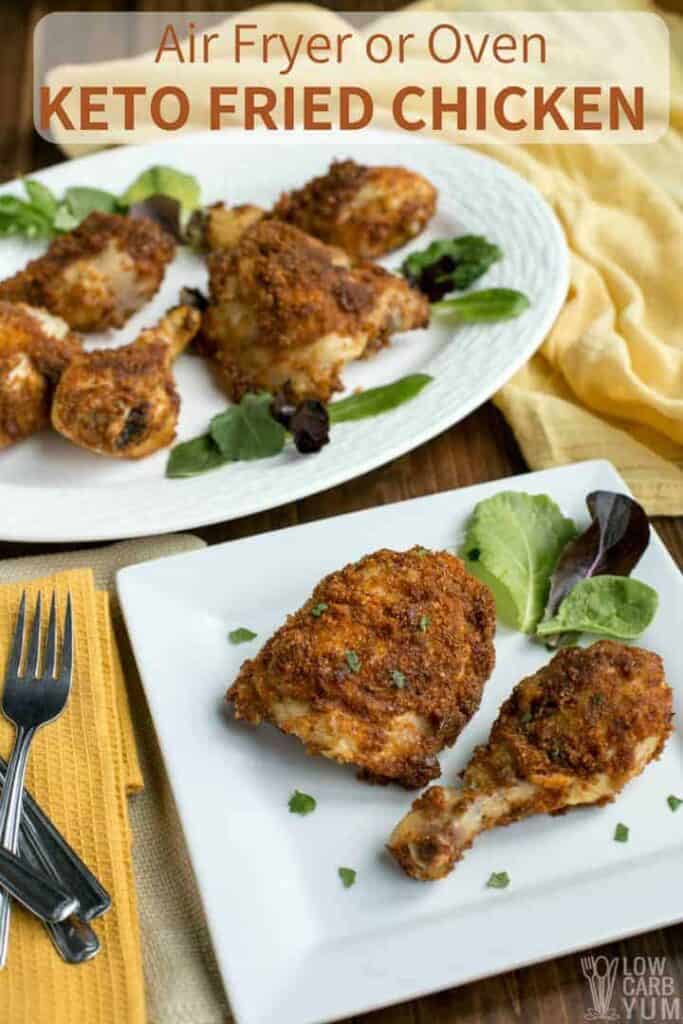 It’s easy to make low carb keto fried chicken in an air fryer. But if you don’t have this trendy appliance, the chicken can be baked in a regular oven instead.

What a difference a couple decades makes. I used to make my family fried chicken about once a week.

I’d bust out the deep frying pan, Crisco vegetable oil, and high-starch bread crumbs. About half hour later, we’d have a heart-attack on a plate.

But boy did it taste good. After the meal was over, with blissful ignorance of the grease coating and clogging my insides, I’d somehow manage to get all the dishes done even though I was in a food coma.

These days, well after my move to low carb, I’m happy to say that it’s possible to create a keto fried chicken recipe that’s just as tasty as the old-school way of doing it.

For this recipe, there’s at least a couple surprising ingredients.

The first is, if you’re not using an oven, is an air fryer. Hopefully, you have a big enough kitchen because it seems like every year, there’s more gadgets that are a must-have for healthy cooking.

Fried chicken in an air fryer is quicker than using an oven. It’s also perfect for low carb French fries or mozzarella sticks.

Now, if you’ve never used an air fryer, here’s basically how it works….

It circulates hot air around the food. Instead of frying something in a vat of scalding hot, rancid vegetable oil, the hot air cooks it all the way through.

It’s culinary wizardry, but I’m telling you it works. (I’m partial to the Philips Digital Airfryer and the popular one made by GoWise.)

The other unusual element of this recipe is I use almond milk. I’m sure in the Deep South, where recipes for this dish are passed down in secret like spy codes, almond milk is not a ubiquitous ingredient.

However, it’s perfect for keto fried chicken. And here’s why….

Buttermilk is a staple of southern fried chicken. But dairy causes sensitivities or allergic symptoms in many people. That’s why dairy-free almond milk is much safer.

Along with the coconut oil and vinegar, the almond milk isn’t going to make this recipe taste like a watery, soggy disaster. And you won’t taste the nutty flavor either.

How to Make Keto Fried Chicken

Step 1 is simple. Just put the 5 pounds of chicken in a bowl (photo 1). I like having breast, thighs and wings instead of just one part. But if you love just the wings, that’s fine.

Mix the one cup of almond mix and one tablespoon white vinegar together (photo 2). Then, pour the mix over the chicken (photo 3).

Place for 2 hours in the refrigerator. Binge watch your favorite show or read a book or go exercise. Actually, while the chicken is in the fridge, you can prepare the add-ons.

Make sure the ingredients are mixed well (photo 6).

Next, after the chicken has cooled in the fridge for 2 hours with the almond milk and vinegar, take it out, and dip each piece in the pork rind blend. All pieces should be well coated (photos 7 & 8).

In the air fryer basket, spread a tablespoon of coconut oil. You can experiment with other oils such as avocado. Just make sure not to use any vegetable oils (no corn, soybean, cottonseed or canola oils).

You’ll then arrange the chicken in a single layer in the basket of the air fryer. (photo 9) Set the temp to 360°F and air fry for 10 minutes. The meal isn’t quite done at this point.

First, rotate the pieces (photo 10). Then, air fry for another 10 minutes. Hopefully, you have a cooking thermometer and can test to make sure the pieces reach 165 degrees.

You might think that an air fryer takes much longer than a conventional oven. But actually, it takes less time.

In fact, a conventional oven requires 50 minutes at 350°F, if not longer. (If you’re using one, place the pieces on a rack and rotate the pieces halfway through cooking as shown in photos 11 & 12.)

As for the pork rinds, they really don’t make this healthy poultry meal less healthy. In fact, some people upon hearing pork rinds are Paleo- and Keto-friendly do a double take.

That’s because when most people think of pork rinds, they think of the highly-processed snack pack that are sold in vending machines. But pork rinds can be minimally-processed, artisanal and even organic.

This meal is definitely not a plant-based meal. However, once in a while, when the family gets a craving for fried chicken, indulge them in this much healthier version.

Recipe for Keto Fried Chicken in an Air Fryer or Oven

Hope you enjoy this easy chicken recipe! Be sure to try my Air Fryer Pork Chops recipe too. 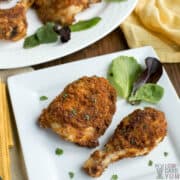 Author: Lisa MarcAurele
4.65 from 17 votes
It’s easy to make fried chicken in an air fryer. But if you don’t have this trendy appliance, the chicken can be baked in a regular oven instead.

Pork rinds give the fried chicken a crispy coating but almond flour should work well too.  The vinegar keeps the chicken juicy and makes it extra tender. I used regular white vinegar, but I’m sure apple cider vinegar will work too. The spices used comes from what is believed to be the blend for Kentucky Fried Chicken. 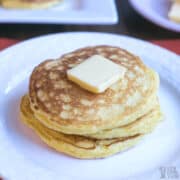 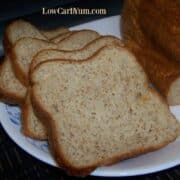 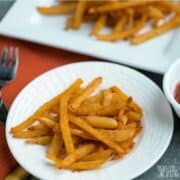