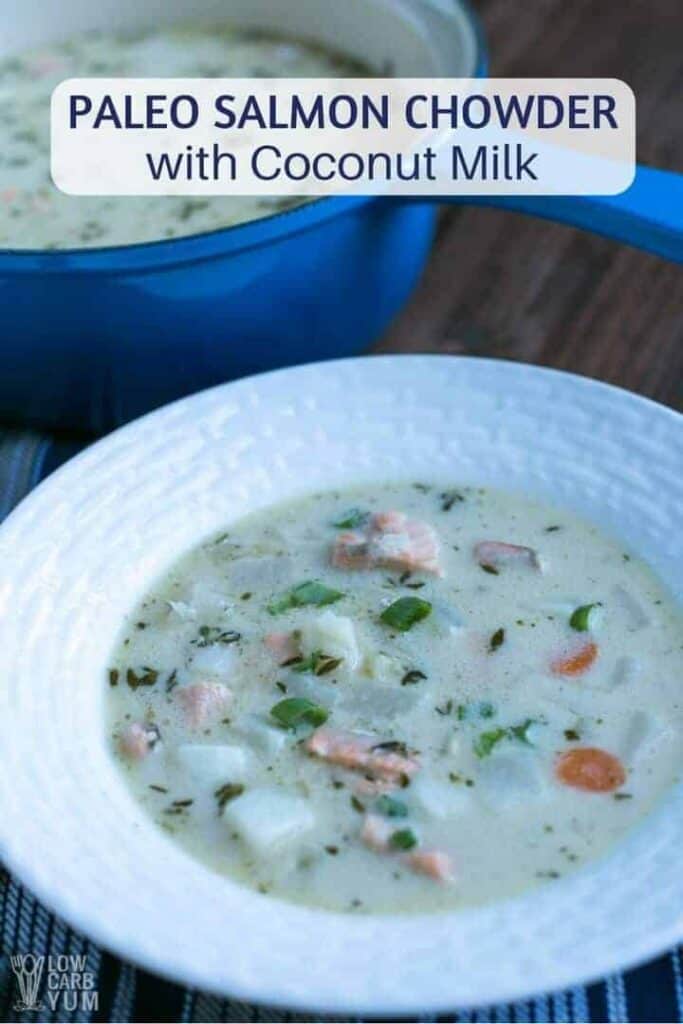 A creamy AIP paleo salmon chowder with coconut milk. It tastes so good that no one will ever know that it's dairy-free. And, it's low carb and keto friendly too!

To help reverse my autoimmune disorders, I've been trying to follow the AIP paleo way of eating. It's tough because I'm also sticking to low carb.

My biggest challenge is not having enough time to make my meals during the work week. So, the majority of my cooking happens on the weekend.

Soup is one of my favorite AIP meals. And, I like to change it up. Last weekend, I made a big batch of paleo salmon chowder with coconut milk.

I've been eating tons of coconut as it's such a great replacement for dairy. I buy canned coconut milk without guar gum.

It's tough to find, even Whole Foods Market only has the kind with guar gum. I buy the pure coconut milk by the case off Amazon.

Another thing I've been doing is trying to eat more fish. Salmon in the Instant Pot is a regular for me and I always stick to the wild caught fish.

I do enjoy fishing and the fish always seems to taste better when you caught it yourself. But, it's too cold for that now (I'm not into ice fishing).

So, I grab what's fresh in the seafood case at the local market. That's where I got the fillet to use in this delicious paleo salmon chowder with coconut milk.

I have been working on getting my husband to buy a nice fishing boat to enjoy in the summer. That way, we could go fishing more often.

We do have a private pond behind our house with bass. But, we just catch and release those fish. They aren't the best fish for eating.

The inspiration for this paleo salmon chowder with coconut milk was from The Autoimmune Paleo Cookbook by Mickey Trescott.

The book is a must have for anyone looking to go an AIP Paleo diet. And, many of the recipes are low carb or can be easily converted.

I loved the taste of the coconut milk in this soup. So much that I'm going to work on converting my low carb clam chowder recipe to be dairy free.

Cream soups have always been my favorite, but I enjoy broth based ones like my low carb vegetable soup as well.

I could pretty much live off soup. That's why I keep tons of bone broth in the pantry for those times when I don't have any homemade soup stock on hand.

Traditionally, salmon chowder would be made with a fish stock. But, I didn't have any fish bones to make the stock.

So, instead of using a seafood base, I used my pressure cooker bone broth which is made from chicken bones. And, the taste was just as good.

However, next time, I'll grab some seafood stock or make my own if I have some fish bones. It's so easy to do if you have all the ingredients on hand. 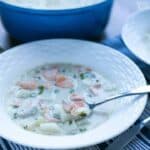 4.80 from 10 votes
A creamy AIP salmon chowder made with coconut milk. It tastes so good that no one will ever know that it's dairy-free. And, it's low carb and keto friendly too!
Prep Time:15 mins
Cook Time:50 mins
Total Time:1 hr 5 mins
Course: Soup
Cuisine: American
Print Pin Review Recipe Save Recipe View Collections
Servings: 6 people
Calories: 349