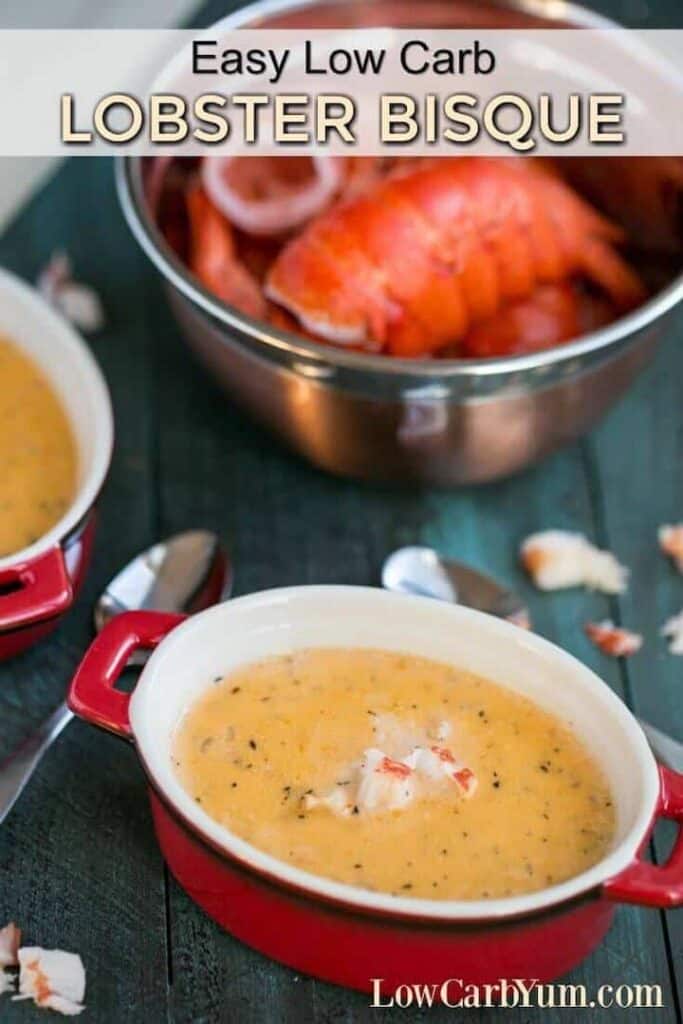 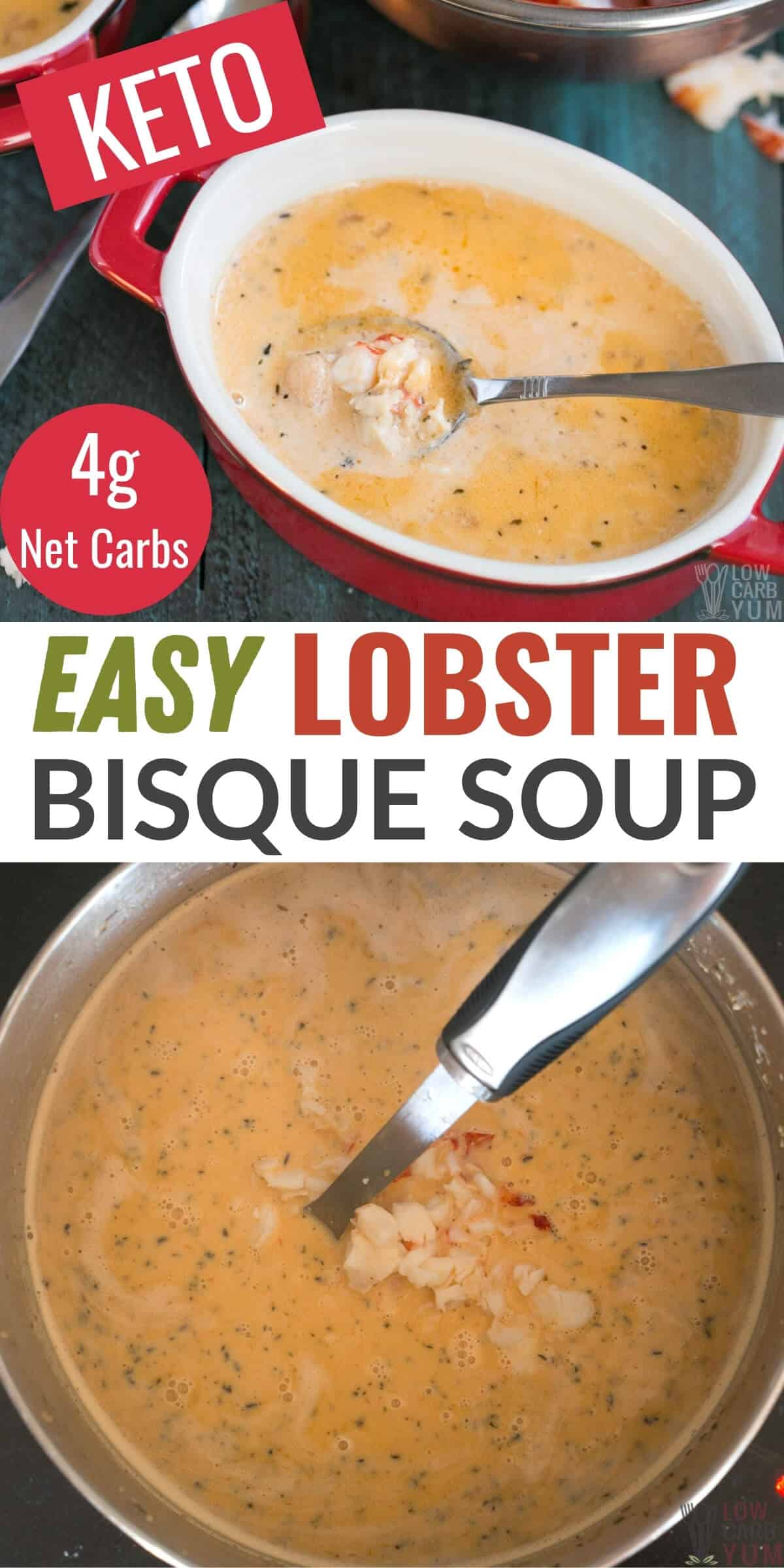 Make your own gourmet soup at home with this easy keto lobster bisque recipe. The best part about this keto soup recipe? This homemade version is also gluten-free and only has 390 calories and 4 net carbs per serving!

As the winter weather returns, I thought it'd be great to make a low carb soup to bring in to work in my lunch crock. It's the perfect comfort food for cold winter days!

This is what really inspired me to put together a soup recipe...

Over the weekend, I bought some frozen Maine lobster tails at ALDI. They were a special holiday item and the price wasn't bad!

Maine lobster is readily available off the shores of Connecticut, so this is the first time I've bought frozen tails. Usually, I buy live lobsters which are always discounted in the summer but, I dislike cooking them live, so I sometimes order them to be freshly cooked at the grocery store.

Lobster meat is excellent for salads or dipping in butter for a delicious dinner. Better yet, it's simple to make a homemade lobster bisque, which is one of our favorite ways to enjoy this tasty seafood!

Bisque is a French soup with a smooth yet thick and creamy texture. It's somewhat very similar to chowder.

However, chowder is typically thicker and full of chunky pieces of meat and vegetables while bisque has a smooth texture that contains a blend of wine and cream.

The soup consists of a tasty broth containing heavy cream and butter for more flavor and tomato for color. A classic bisque will also contain shellfish, such as crab, shrimp, or lobster.

To get the smooth texture, the soup base is puréed before adding in the seafood meat. The only shellfish in an authentic lobster bisque recipe is lobster, which you can pair with vegetables and other garnishes.

To make this lobster bisque recipe from scratch, all you need are 9 ingredients plus a couple of spices you probably already have in your spice cupboard. It's really that simple!

The spices we like to use in this soup recipe are celery salt, dried thyme, paprika, ground cayenne pepper, and ground black pepper.

How To Thicken This Keto Lobster Bisque Recipe

Unfortunately, most bisque soups are thickened with flour or rice. It's not a lot, but since going low-carb and gluten-free, I avoid any questionable foods at restaurants.

I've read that some of the more traditional bisques actually contain ground-up seafood shells that have been made into a paste which is used to thicken the soup!

To be honest, I didn't think the soup was that thin without adding a thickener. However, since I'm used to seeing it really thick, I sprinkled in some glucomannan powder.

If you aren't opposed to xanthan gum or guar gum, you could always sprinkle in a little of either or both to thicken it up. But, just using a large amount of cream in this lobster bisque recipe tends to thicken the soup base.

And, you always have the option to puree some of the lobster shells and use those as a thickener as well!

How To Make Easy Lobster Bisque From Scratch

When it comes to making this soup recipe yourself, there are a few extra steps you will need to take to make this the best lobster bisque you have ever made!

How To Properly Cook and Shell A Lobster Tail

Before you do anything else, the lobsters will need to be cooked in boiling water first.

If fresh, they will need to be dipped into boiling water while still alive. This is because lobsters contain bacteria that quickly releases toxins when the lobster dies.

However, if you would rather not cook something that is still moving, frozen lobster tails are available uncooked. The bacteria is not an issue because the tail meat isn't spoiled with the head removed immediately then frozen.

To cook the lobster:

Cooking Note: Do NOT throw away the boiled water. We are going to use it as a stock for the bisque.

To remove the meat from the lobster tail:

After letting the lobster tail cool down, you are going to butterfly the tail to remove the meat.

Start Cooking The Base Of The Soup

To start the bisque, all of the vegetables are sautéed in oil or butter. Because I like to make my soup simple, I only used a little onion and garlic.

However, celery and carrots are often used so you can add a little of those if desired. Then, wine is slowly added to deglaze the pan followed by the addition of the seasonings. Don't worry about the alcohol, it rapidly cooks off so there isn't any in the finished dish.

The lobster stock and a bit of tomato paste is added to the base.

Allow the bisque to simmer for about ten minutes!

Blend The Lobster Bisque Soup Together

After the soup has finished simmer, it's time to blend the soup altogether. A blender or food processor is then used to make the soup base smooth.

It's best to use an immersion blender so you can puree the mixture right in the pot. This works well for other soups like Brussels sprout soup too!

Add The Cream And Butter

I add in cream and butter after the base has been blended. If needed, I'll adjust the seasonings to taste as well. Finally, the lobster is added and the lobster bisque soup is simmered a bit longer.

Serve The Lobster Soup And Enjoy!

After the soup has finished simmering one last time, use a ladle to serve yourself a bowl of soup and enjoy!

What To Serve With Keto Lobster Bisque

Lobster bisque can be served as the start to a full course dinner complete with seasonal low carb vegetables and roasted radishes. Although the main entree is usually another seafood dish, it doesn't have to be! I love to combine lobster with air fryer steak for a classic surf and turf meal.

The creamy lobster soup is also perfect for lunch. It can be the main dish by providing a large serving in a bowl with keto crackers on the side. But, my favorite option is to combine it with a tossed salad and a slice of low carb bread.

The entire recipe and instructions are at the bottom of this post. First, I want to answer some common questions about this bisque soup.

How many carbs are in a lobster bisque?

A traditional lobster bisque soup contains about 58 grams of carbs, which is a bit more than what a daily keto diet requires. You can tweak your lobster bisque recipe to have under ten net carbs per serving by switching out some ingredients.

For example, instead of using pureed rice or flour to thicken the soup, use glucomannan powder, xanthan gum, or guar gum.

Alternatively, use pureed cauliflower instead of cream to make the meal light yet creamy!

Seafood is generally keto-friendly, and lobster is not an exception. It is high in protein like meat but contains other nutrients that improve cardiovascular health, mental health, and more.

If you wonder how to make lobster bisque healthy, you don’t have to do much since the standard recipe contains several nutrients. My keto lobster bisque recipe takes things a step further by offering fewer calories but more nutrients by adding veggies!

Can I store lobster bisque in the freezer?

Having lobster bisque on standby in the freezer means you can have this keto-friendly meal whenever you want. However, keeping bisque in the freezer and reheating it without the proper precautions will ruin its texture and flavor.

Here’s how to store lobster bisque in the freezer without it clumping and curdling:

When you get a craving for lobster bisque, take the soup out of the freezer and let it thaw overnight in the fridge.

After thawing it, I recommend reheating the soup on the stove, not your microwave or oven. Avoid clumping or curdling by stirring the bisque continuously while it warms over low heat.

Are you searching for more soup recipes? Take a look at some of these long time favorites: 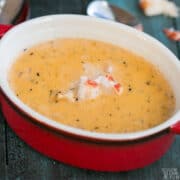 The soup can be thickened with glucomannan powder, xanthan gum, and or guar gum. Traditional lobster bisque soups were also thickened with ground lobster shells. It's best to use a stick blender right in the pot to puree the soup mixture. However, if you don't have one, the soup can be pureed in a blender in small batches. Just be careful transferring the hot soup between the pot and blender. Lobster stock is available in a can, but it's fairly expensive. That's why it's better to just use the water used to cook the lobster in.