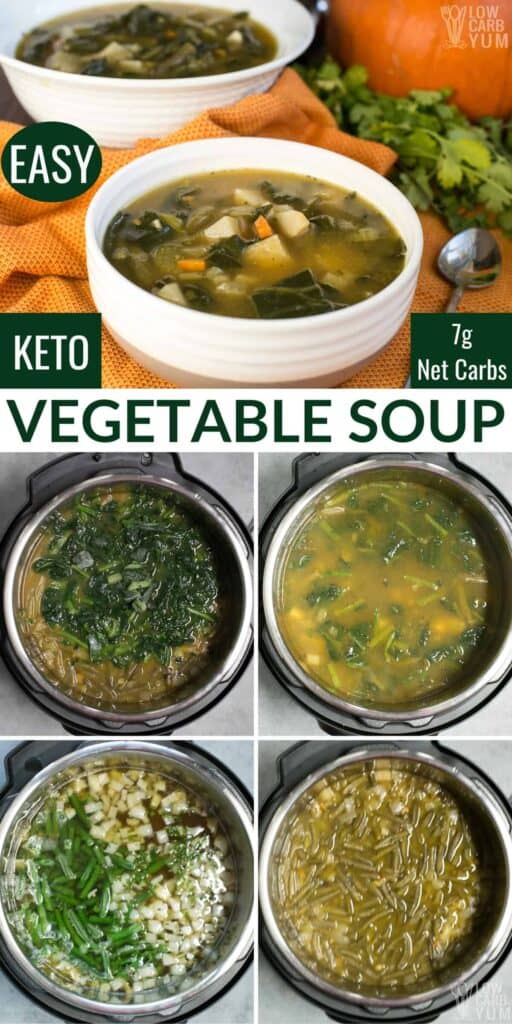 A chunky keto vegetable soup that's easy to make in the Instant Pot or on the stove top. It's a comforting meatless low carb meal idea that warms you up from the inside out.

A ketogenic diet doesn't have to be loaded with meat. There's plenty of low carb veggie options.

In fact, there's no reason why you can't enjoy vegan and vegetarian meals while keeping carbs in check.

For a meatless lunch or light dinner, try this hearty keto vegetable soup. It's loaded with veggies yet has just 7 grams net for each two cup serving.

If you use an electric pressure cooker, the cooking time is just 10 minutes on high pressure. But the soup can also be simmered on the stove if you don't have an Instant Pot.

How to make keto vegetable soup

You'll start out by preparing your veggies:

That's all there is to making this hearty low carb veggie soup!

You want to be careful not to overcook the vegetables so they don't get mushy. I found ten minutes at high pressure was just enough time as the vegetables do cook as the pot comes up in pressure.

Since soups are typically simmered for a while on the stove. I decided to let the soup sit in the electric pressure cooker after the cooking cycle was done before opening the pressure relief valve.

To thicken the base and add flavor, organic pumpkin puree is added. It does add some carbs, so you can leave it out of the vegetable soup if you are strict keto.

Green beans are also a bit heavier in carbs than other low carb vegetables. So, you can leave them out or replace with a lower carb vegetable like asparagus. In fact, what you use in this soup should be the veggies you enjoy eating.

Kale or bok choy would also be tasty in this soup. So just do a custom blend. Or, you can add in a few bags of frozen mixed veggies to cut back on the prep time. That way, you won't have to do any slicing and dicing.

If you don't have an Instant Pot, you can slow cook the soup in a Crock Pot. I've provided directions for simmering it on the stove. The slow cooker would be similar.

To slow cook this keto vegetable soup, just dump all the ingredients into the pot and cook on low. It should be ready in 3-4 hours. If you are worried about any of the veggies getting mushy or overcooked, just add them in during the last 30 minutes of slow cooking.

Although you can cook this soup on the stove or in a slow cooker, I prefer using the electric pressure cooker. It's fairly automated and faster than the other two ways.

Do you own an Instant Pot or other electric pressure cooker? If so, you may enjoy these other low carb soup recipes too: 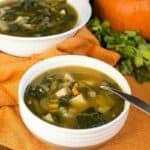 Vegetables can be substituted with other low carb vegetables depending on preferences. The pumpkin puree is used to thicken the soup and add flavor but can be omitted to reduce the amount of carbs. A slow cooker can also be used. Just slow cook on low for 6 to 8 hours and add in the spinach during the last half hour.