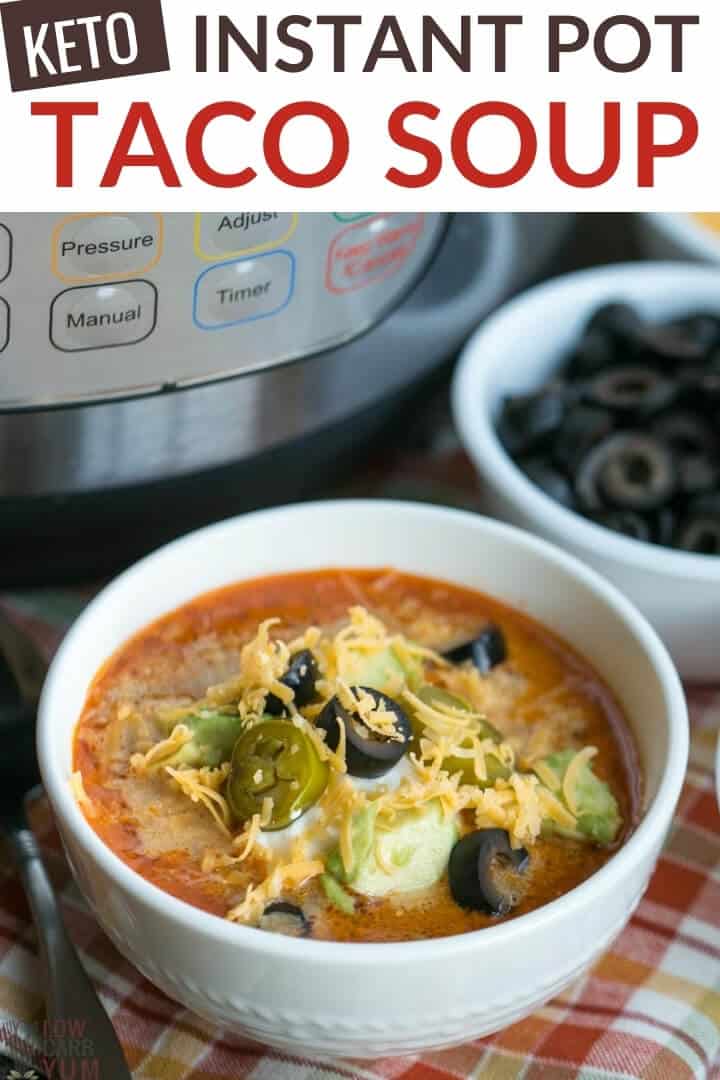 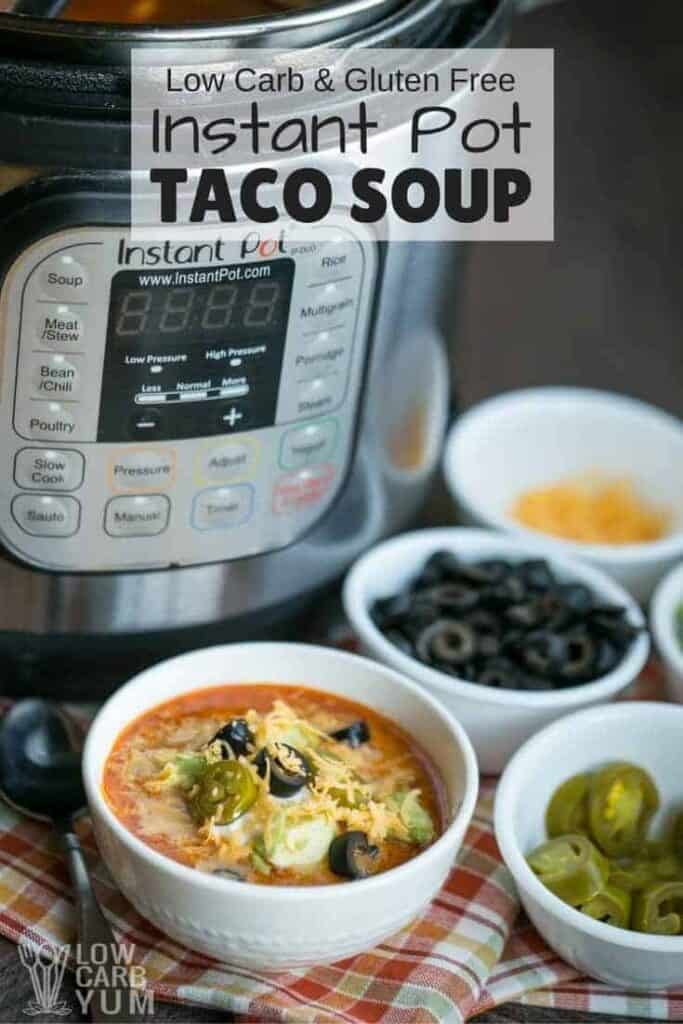 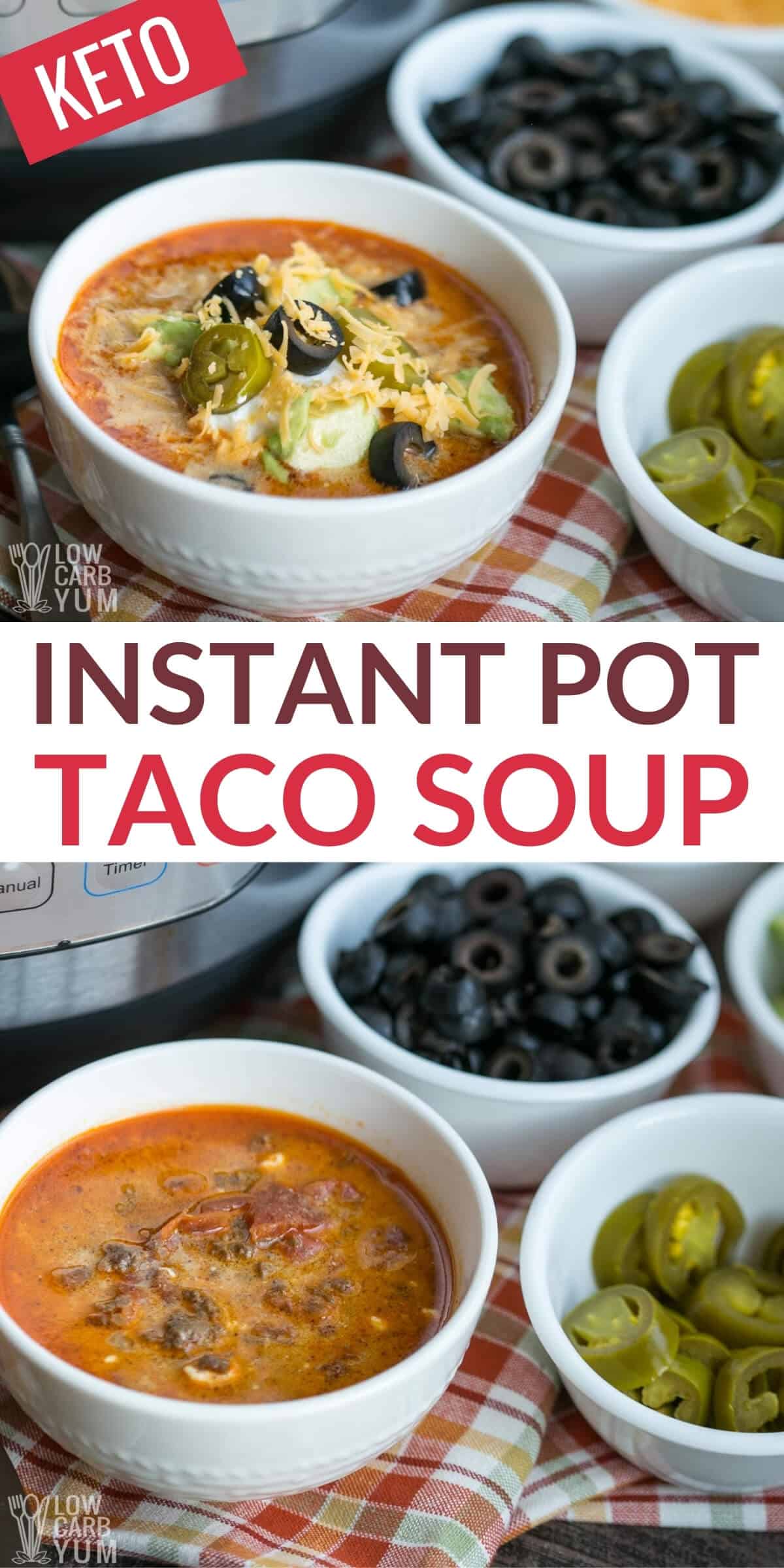 Now that the weather is getting warmer, I don’t want to be spending too much time cooking. That’s why I need to revisit using my Instant Pot electric pressure cooker.

If you don’t have one of these handy machines, you should definitely look into getting one. Not only does it pressure cook, but it can be used to sauté, steam, slow cook, and make yogurt.

I decided to test out the soup setting with this low carb taco soup. The inspiration for the recipe is from Linda at Genaw.com.

Since I didn’t have a lot of time to babysit the stove or wait around for the slow cooker to finish, the Instant Pot seemed like the way to go. And, it certainly saved tons of time!

Pressure cooking is brand new to me, but it’s been around for a long time. I still have an old stovetop pressure cooker still in the box which I bought to can garden vegetables.

I love to cook, but with my busy schedule, I don’t have enough time to really play in the kitchen. That’s what so great about using the Instant Pot to make this low carb taco soup.

Here is what we used in this recipe. I’ll also share some variations and ingredient swaps you can make.

Note: The entire recipe is in the printable recipe card at the bottom of this post.

How To Make Keto Taco Soup In the Instant Pot

The typical soup recipe requires simmering on the stove for a while or using the crockpot to slow cook. By cooking this recipe under pressure, the soup only needed a total of 15 minutes in the Instant Pot.

I cooked the soup for 10 minutes on the “Soup” setting then allowed the pressure to release for 5 minutes.

However, I later discovered that it’s better to cook the soup for only five minutes and then let it sit for ten minutes after releasing pressure before removing the lid.

Either way, it’s only a total of only 15 minutes of cooking after reaching pressure for this Instant Pot taco soup.

The preparation time for the soup requires even less time. I took about 5 minutes to brown the meat on the “Sauté” setting, then all the other ingredients are dumped in.

With such speed, why would you cook this low carb taco soup any other way? I suppose price could be a factor as the Instant Pot isn’t cheap. But, with all the time you save, it’s well worth that initial cost.

I also love that the meat can be browned right in the same pot. Although some crock pots do have that feature, it’s not a standard feature on most slow cookers.

Don’t Use A Pressure Cooker to Cook Dairy

It’s recommended not to pressure cook dairy. Therefore, it’s best to add in the cream cheese and cream after pressure cooking.

Please remember to add the dairy at the very last step. The soup will be hot enough that the cream cheese and dairy will melt right away!

You can change up the seasoning blend as you like for this soup. I used a spice blend that’s similar to what I used in my Mexican Beef with Zucchini recipe.

You can top this tasty low carb soup any way you like!

The toppings can add a bit more carbs so be careful if you are on a strict carb diet. The tomatoes also have natural sugar so I try not to go overboard with them.

Can You Freeze The Soup?

Yes, you can freeze the soup. If you want, you can mix all the ingredients together and store them in a freezer bag. They will last about 4 months in the freezer.

To store soup in the freezer, lay the cooled soup that’s in a freezer bag flat on a cookie or baking sheet and put both in the freezer. This will let the soup freeze flat. After it is frozen, you can remove the baking tray.

When you are ready to eat the soup, let it thaw in the refrigerator overnight. Heat it on the stove for the best results.

If you haven’t cooked soup in the Instant Pot yet, give this soup recipe a try. You may never go back to cooking soup on the stovetop again!

Do you have an Instant Pot? If so, what’s your favorite food to make in it? I love making Instant Pot Meatloaf!

OTHER RECIPES TO TRY

Looking for more tasty keto soups that are easy to throw together? Check out a few of these favorites: 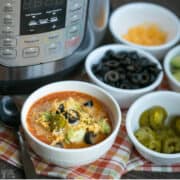 It’s recommended not to pressure cook dairy. Therefore, it’s best to add in the cream cheese and cream after pressure cooking.