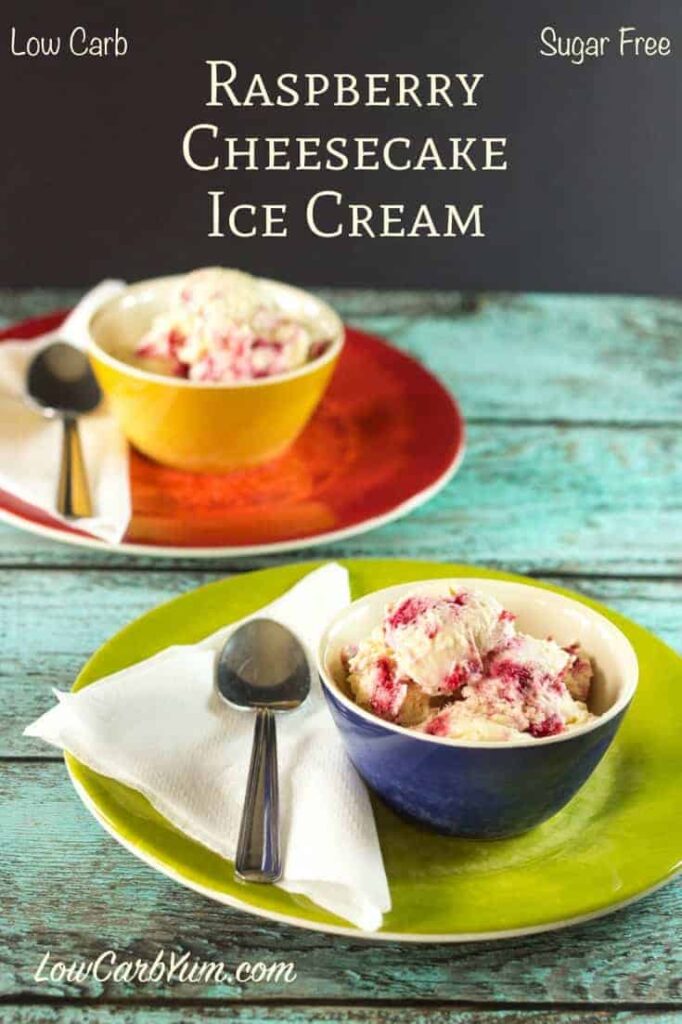 After buying a nicer ice cream maker that has a built in compressor, I’m determined to figure out a way to make ice cream that scoops out nicely from the freezer.

I did find a great recipe by Jenni Bauer that doesn’t use any eggs which I used for my coffee ice cream and vanilla bean ice cream. Those ice creams do scoop well after being in the freezer for a while, but you still need to let it sit out for 10-15 minutes before scooping.

In the past, I’ve tried glycerin and it does work pretty well, but I believe it adds some extra carbs. This time around, I thought I’d try a little vodka since it changes the freezing point of the ice cream mixture.

Although this raspberry cheesecake ice cream is super delicious, it still froze really hard in the freezer. I did use Swerve rather than a fiber based sweeter so that may have been some of the issue.

I’ve found that using an inulin sweetener like Just Like Sugar results in an ice cream that doesn’t freeze as hard as when I use a sweeter with erythritol like Swerve.

I do like the taste of the erythritol sweeteners better, but they just don’t perform as well in ice cream. Therefore, I’m starting to experiment with adding monk fruit extract into my ice cream to give it a boost of sweetness.

I thought the addition of cream cheese into this custard based sugar free ice cream would create a more scoopable ice cream, but it was still a bit difficult to scoop after sitting in the freezer overnight.

This raspberry cheesecake ice cream has a wonderful taste, but I need to work on getting it to be more scoopable without requiring 10-15 minutes of thawing time after taking out of the freezer.

One ice cream ingredient I haven’t tried yet is to add an ice cream stabilizer. Most commercially prepared ice creams use a stabilizer so I ordered a bottle of Sevagel 64/G Ice Cream Stabilizer off Amazon. It hasn’t arrived yet, but I hope to provide some feedback on it when I post my next low carb ice cream recipe.

Xanthan gum is a popular stabilizer for ice cream, but I’m thinking I need more to keep the ice crystals from forming. Most ice cream stabilizers contain a mixture of the following natural ingredients: guar gum, Locust bean gum, Carrageenan, Xanthan gum, Polysorbate 80, Mono- and diglycerides, and or Gelatin.

I’ve also heard of some people adding cream of tartar to homemade ice cream. Not sure what that does, but I definitely need to do more experimenting with custard based ice creams. The weather is perfect for eating ice cream so I may just have to do a lot of practicing.

If you have any ideas on making softer, more scoopable low carb ice cream, please leave me a comment. I have had success in the past using an eggless base with Vitafiber and cream cheese, but I’d like work on some more traditional egg yolk based recipes. 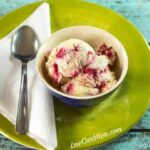 Although Swerve was used, an inulin sweeter like Just Like Sugar results in a more scoopable ice cream and is preferred over erythritol based sweeteners.