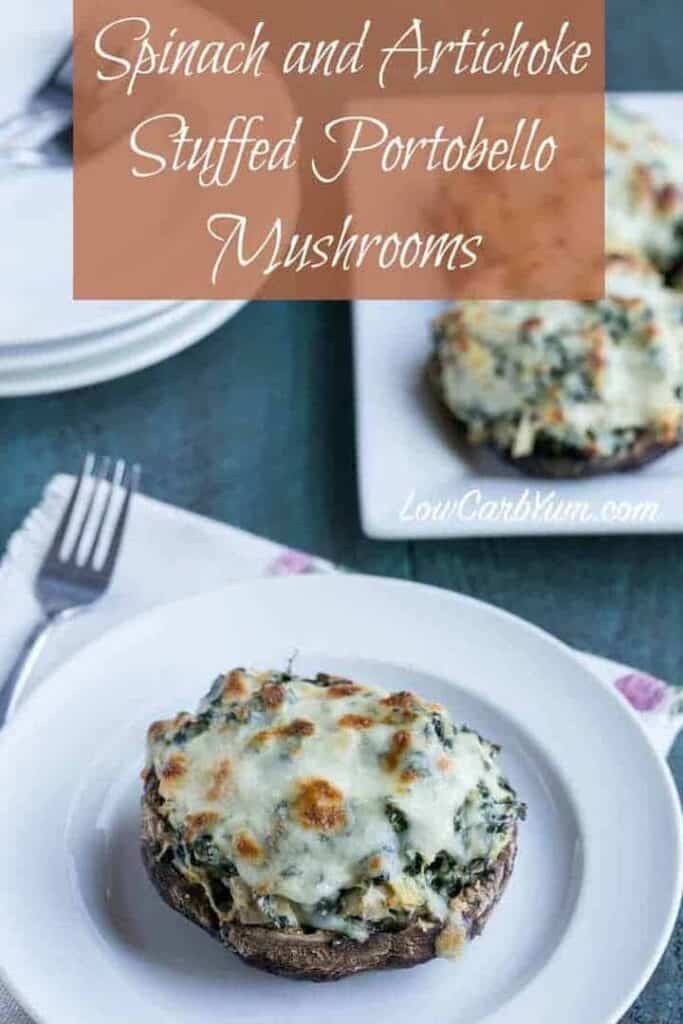 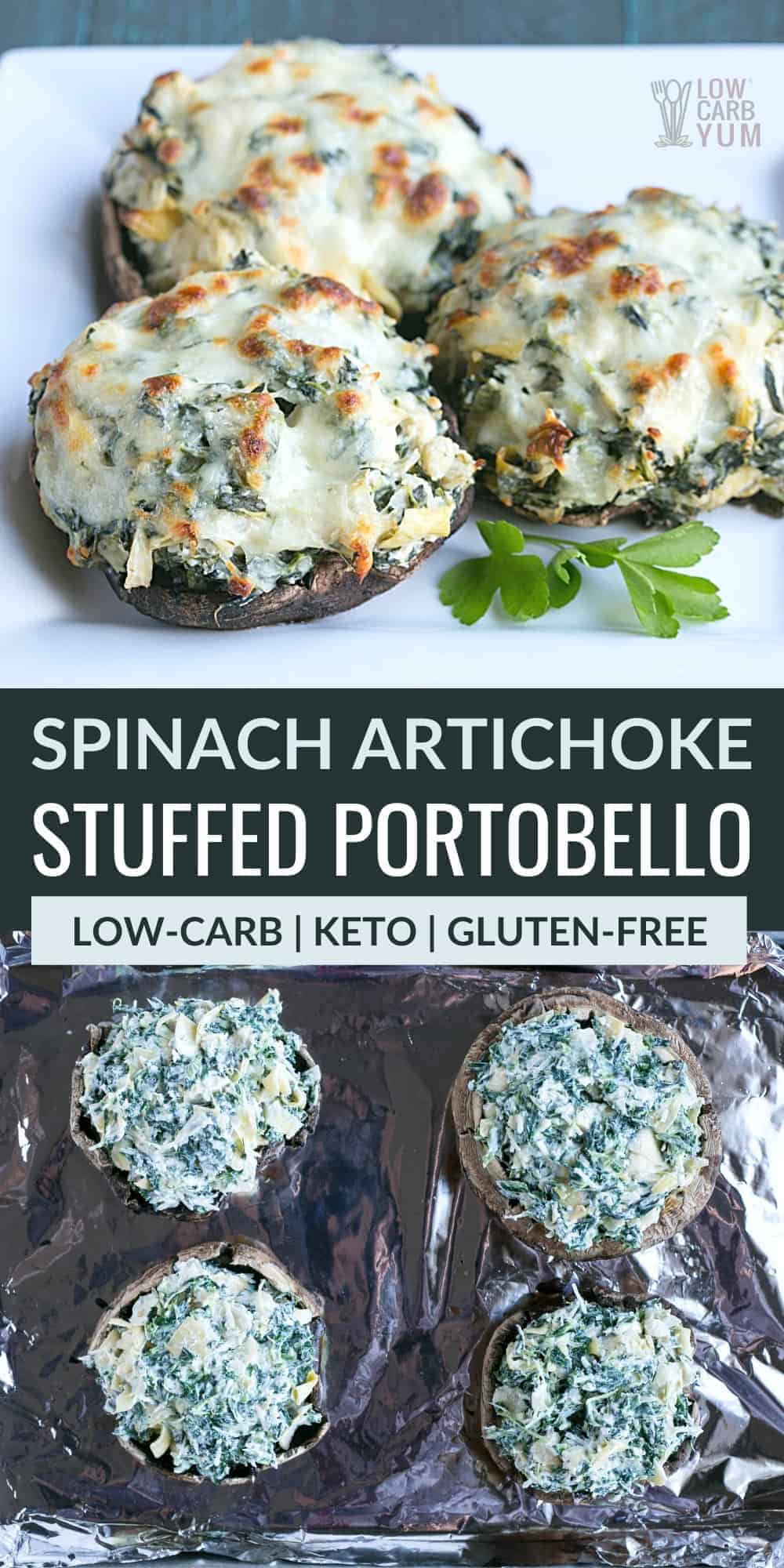 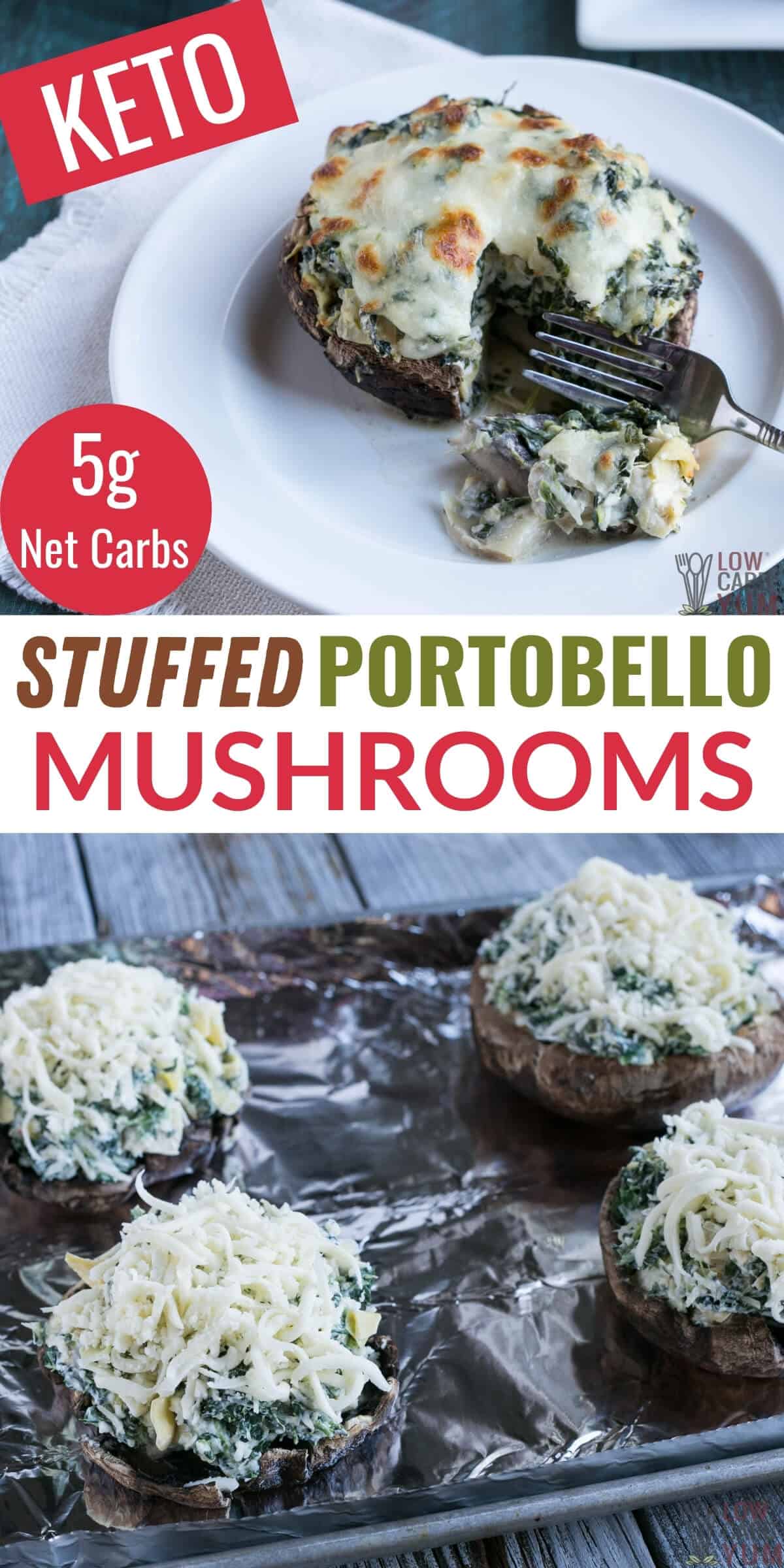 Stuffed portobello mushrooms with spinach and artichoke are so easy to make! Serve these low carb stuffed mushrooms as an appetizer or side dish.

I’m a huge fan of spinach artichoke dip and I’m also a mushroom lover. The combination of the two makes this dish one of the best vegetarian low carb recipes!

There aren’t that many carbs in portabella mushrooms but, there are carbs in artichokes and spinach. That’s why I don’t recommend eating a whole stuffed mushroom.

One medium artichoke has about 13 grams of carbohydrates, but over half the carbs are fiber. So if you count net carbs, it shouldn’t be an issue.

A single portobello mushroom cap has 4 grams of total carbs, most of which (3 grams) is fiber. A cup of cooked spinach has about 7 grams of carbs with over half (4 grams) coming from fiber.

Because this is a vegetarian stuffed portobello mushroom recipe, the carbs are higher than the ones mainly stuffed with meat. But, if you count net carbs instead of total, each one of the stuffed mushrooms has under 10 grams of net carbs.

This is such a simple recipe. It's enough to serve four people!

Kitchen Tools Used In This Recipe

You may want to have the following items on hand to make the recipe:

How To Make Artichoke and Spinach Stuffed Mushrooms

I’ve never made keto stuffed mushrooms before so I wasn’t really sure how much of the inside of the mushrooms to remove. I ended up cutting out the stems and scraping out the gills.

After the mushroom caps are prepared and placed on a baking sheet, olive oil is brushed on. Then, they are broiled on high for about 5 minutes on each side.

This pre-cooks the mushrooms so they are more tender.

Although frozen chopped spinach was used for convenience in these stuffed portobello mushrooms, fresh spinach is always an option. It just needs to be steamed and then drained and chopped.

To make sure the spinach wasn’t too watery after cooking, it’s best to put it in a clean kitchen towel and squeeze out as much moisture as possible. Next, it’s mixed together with artichoke, cream cheese, sour cream, Parmesan cheese, and seasonings.

The filling should be piled on in a nice mound to top off each portobello mushroom. Once the filling is evenly divided, freshly grated mozzarella cheese is sprinkled on top.

Finally, the stuffed portabella mushroom caps are baked at 375°F for about 10 to 15 minutes. To get the cheese topping to brown up nicely, the broiler may need to be turned on at the end of baking.

I kept the stuffed mushrooms on the center oven rack when baking. But, for the last couple of minutes, I turned the broiler on high just until the tops began to brown.

What To Serve With Baked Stuffed Portobello Mushrooms

These gems are quite tasty alone, but I suggest eating only half as the carb count is rather high for a whole one.

There is quite a bit of filling in each mushroom cap so you’ll get a nice serving of veggies in these tasty bites. We all know that spinach is super healthy, but artichokes are great too.

Before we get to the recipe card below, I wanted to answer a few questions I get about stuffed mushrooms.

How do you keep stuffed mushrooms from becoming watery?

To keep the mushrooms from going watery when they cook, roast them on the stove before you stuff them. This will dry them out a bit more. You should also use a paper towel to get as much water out of the spinach and artichokes as possible.

Can you eat mushrooms on keto?

This depends on how many carbs you ate that day. This recipe is kind of high in carbs, so either make some modifications or watch your portion size.

How do you store stuffed mushrooms?

There are so many ways to enjoy mushrooms on a low carb diet. This baked stuffed portobello mushroom recipe is just one out of hundreds.

Here are a few of my own personal favorites:

I’ve even seen people use portobello mushrooms as hamburger buns. I haven’t tried that yet, but will soon.

If you're looking for another great artichoke recipe, be sure to try my easy roasted artichoke hearts recipe! 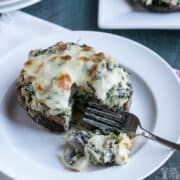 Each serving size is half of a stuffed mushroom. To keep the mushrooms from going watery when they cook, roast them on the stove before you stuff them. This will dry them out a bit more. You should also use a paper towel to get as much water out of the spinach and artichokes as possible. These will only last 2-3 days in the refrigerator. Store them in an airtight container in the refrigerator. Eat them as soon as possible since they actually taste the best right out of the oven.