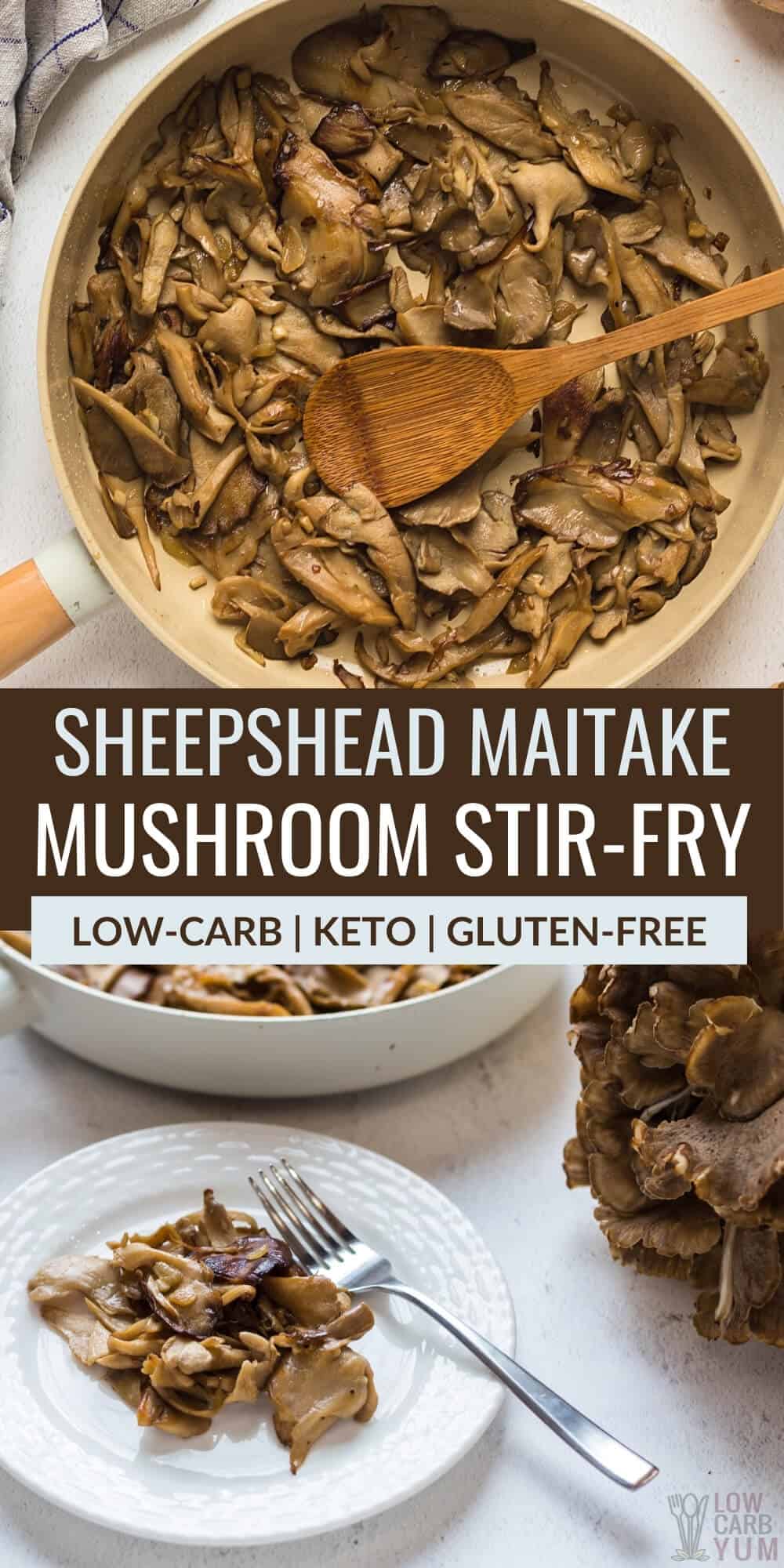 Do you forage for wild mushrooms? The easy to identify hen of the woods Maitake mushrooms are not difficult to find. If you spot one, try it in them in this stir-fry sheepshead mushroom recipe.

I was just introduced to eating wild mushrooms from the local woods. My husband has a friend who likes to go out and look for easy to identify native mushrooms.

One of the easiest mushrooms to identify in the wild are Maitake mushrooms. They are native to Northeastern Japan, China, and North America.

Here in Connecticut, many refer to this edible mushroom as Hen of the Woods. But I've also heard these wild mushrooms referred to as Ramshead or Sheepshead mushrooms. The scientific name for this mushroom is Grifola frondosa.

Maitake mushrooms can be cooked fresh or be frozen to use later. Some boil it first to get rid of any harmful bacteria that may be on it. However, there's no need to boil as the cooking process will kill any bacteria.

You can use frozen sheepshead mushroom pieces in a recipe without thawing first. Therefore, it's a good idea to cut it into smaller pieces before freezing.

The flavor of the Maitake mushroom is highly regarded among wild mushrooms. After listening to others rave about their taste, I just had to give it a try.

I'll admit I was a bit nervous to try one of these mushroom. But after frying one up, I'm ready to look for more because it was so delicious.

My recipe for a stir fried wild mushrooms may seem more complex that others, but the additional ingredients really enhance the flavor.

Hen Of The Woods

You'll need about a pound of cut Maitake mushroom. As mentioned previously, this wild mushroom is also called Hen Of The Woods, Sheep's Head, or Ram's Head mushroom.

Nearly all basic stir fry recipes call for garlic and onion. They add flavor and provide a wonderful aroma. Feel free to adjust the amounts to suit your own taste.

I like to fry my mushrooms in a blend of olive oil and melted butter. They add fat and give a richer flavor.

Adding broth gives a subtle meaty element that really ups the taste of the mushroom. If I don’t have time to make my own beef bone broth from scratch, I typically use Kettle & Fire!

I use a dry white cooking wine to add flavor that complements the broth. If you don't have any on hand, you could try using a little lemon juice or vinegar.

Note: You'll find the full list of ingredients to make this low-carb dish with amounts used in the recipe card at the bottom.

How To Make The Recipe

This easy Maitake mushroom recipe whips up in less than 30 minutes. You'll find the full instructions in the recipe card. Here you'll find a step-by-step look at the process.

Begin by placing your chopped onions in the butter over medium heat, sautéing for around 5 to 10 minutes, until garlic is golden and onion is translucent.

Cook for 15 to 20 minute, stirring frequently, until the liquid has boiled off. Because it's cooked for an extended period in liquid, there's no reason to boil the mushroom before.

After the liquid is gone, allow the sides of the mushroom pieces brown up in the pan. Be careful to brown and not burn the mushroom.

Where To Find Sheepshead Mushrooms

Maitake mushrooms are an excellent wild mushroom for beginners to gather from the woods. That's because there are no dangerous mushrooms that look like them. These mushrooms can usually be found in late summer and early fall growing at the base of large oak trees.

They've also been found on elm, maple, beech, chestnut and sycamore trees. I've probably walked past these mushrooms hundreds of times. But I've never thought of picking these ugly looking tree growths and cooking them up.

These wild mushrooms have been shown to contain anti-diabetic properties as well as anti-cancer and anti-tumor properties. They have also been found to be helpful in relieving the effects of chemotherapy.

The Maitake mushroom is also known to have medicinal value. It contains a beneficial protein-bound beta-glucan compound too.

Sheepshead mushrooms are rich in minerals such as potassium, calcium, and magnesium. In addition, they contain various vitamins such as B2, D2 and niacin as well as fibers and amino acids.

How To Serve Stir Fried Hen Of The Woods Mushroom

This simple Maitake mushroom recipe was given to me by my husband's friend Joe. He has been making it for decades.

Joe told us he likes to serve the stir fried mushrooms with pasta or Italian bread. But I find the dish to be a nice side for steak.

I find the leftovers are great to use in a keto cream of mushroom soup. They also work well in a low-carb marinara sauce.

If you like to forage for wild mushrooms, you may want to try them in other recipes. Here's a few of my favorite mushroom recipes. 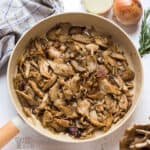 Can be served with keto noodles or low-carb bread. The stir-fried sheepshead is also a nice side for steak. Leftovers are great to use in a keto cream of mushroom soup or low-carb marinara sauce.