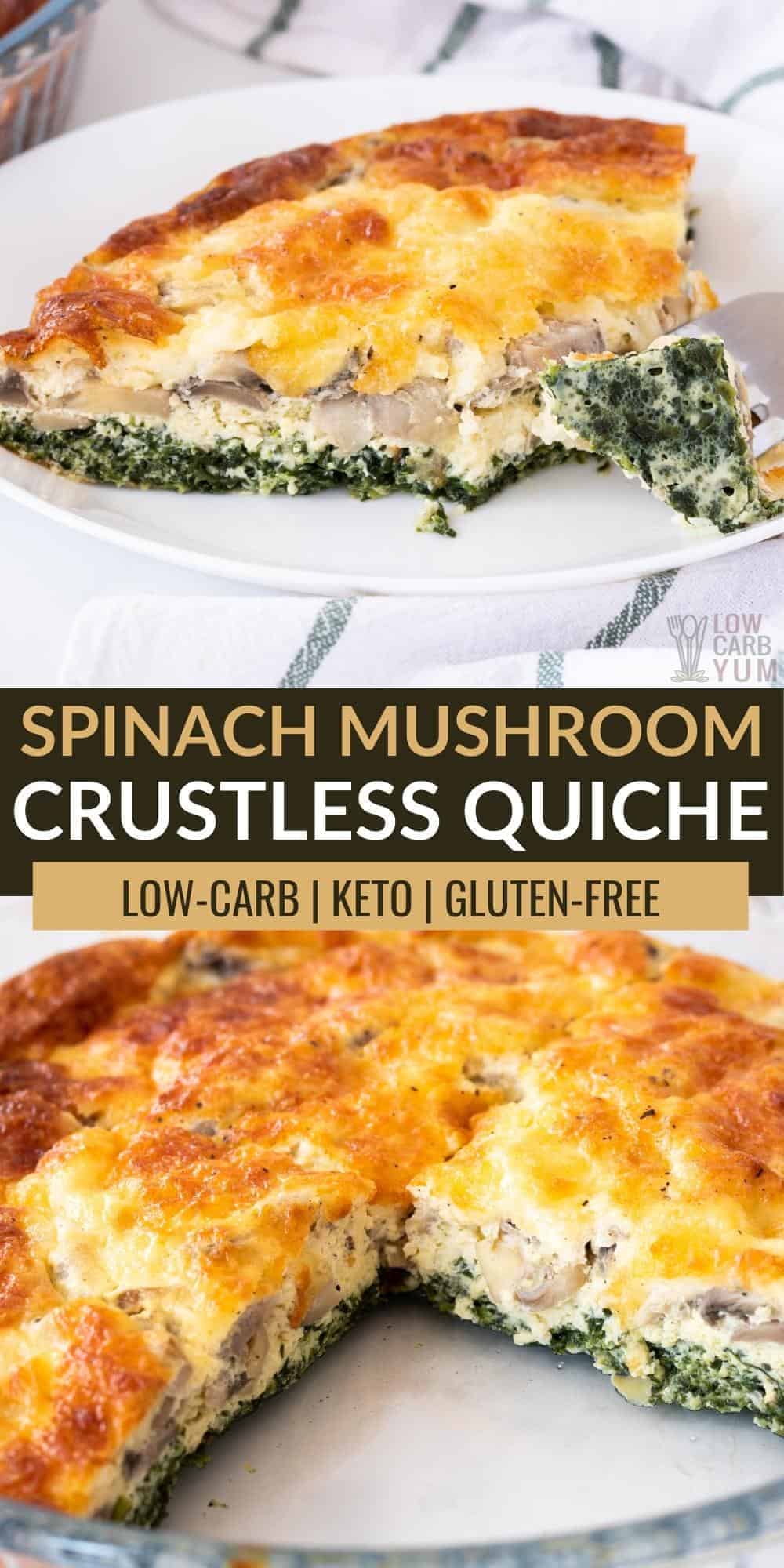 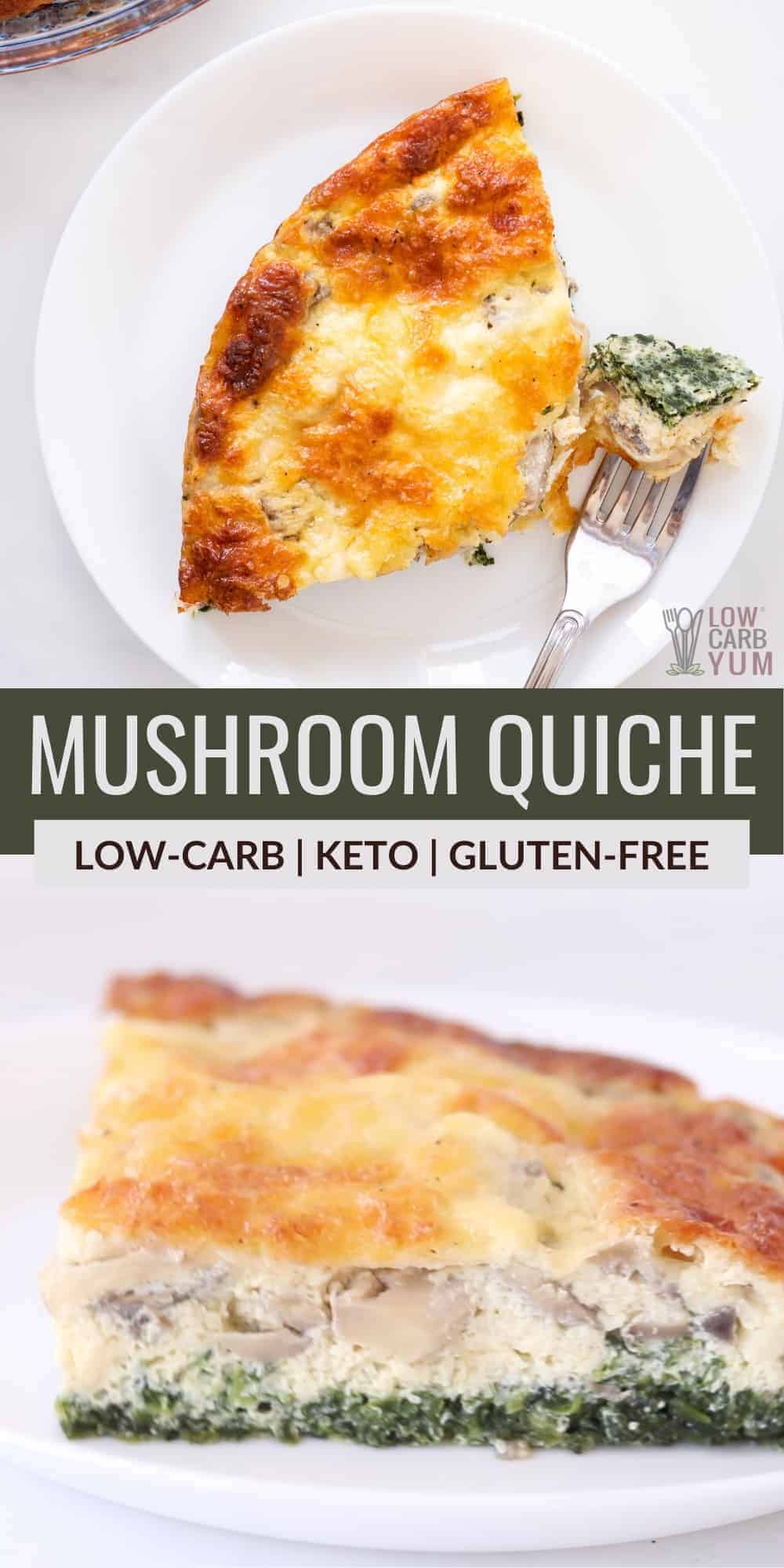 This low-carb spinach mushroom quiche is quick and easy to prepare when you don't have a lot of time for dinner. Can be made with or without a pie crust.

Have you ever had one of those weekends where you really know you should go to the grocery store, but just put it off that you end up not going? That how it went for me last weekend.

I figured I had plenty of food to get by, but didn't have any meat other than frozen venison. Because I didn't feel like eating venison, I made this simple crustless quiche after work last Monday.

It's so easy to put together and is a great standby when there really isn't much selection for a low carb dinner. I always buy at least two dozen eggs, but the organic ones were on sale the last time I went food shopping so I bought four dozen.

I ended up making a quick trip to Aldi's where I stocked up on all kinds of meat the following night, but the leftovers from this spinach mushroom quiche made easy lunches for me at work.

To start this quiche off, I thawed a box of frozen spinach in the microwave, drained it and then spread it out in a quiche dish. I squeezed as much of the liquid out that I could in a colander. The liquid has a lot of good stuff in it so I like to save it and add it to a smoothie.

I didn't have any fresh mushrooms so I used two 4 oz cans of sliced mushrooms. I just drained the mushrooms and spread them out over the spinach layer in the quiche dish.

Swiss cheese would have been my first choice, but I didn't have any so I used two slices of provolone cheese for the next layer. You could use any cheese that you'd like. I just broke the slices up so the cheese would be spread out.

Then I whipped up the eggs with some diluted heavy cream. I added some seasonings and grated parmesan cheese to the mix. The egg mixture was then poured over the other ingredients in the pie pan.

The final touch was to cover the top with grated mozzarella cheese so it would brown up nicely and have the extra cheesy goodness that I love. I didn't really measure the amount, but it was about a cup or so of cheese.

It took about 45 minutes in the oven for the center to set and the outside had turned a nice golden brown. It was all puffy when I took it out of the oven.

After sitting and cooling down, the puffiness goes away as things sink down into the pie dish. The spinach and mushroom quiche needs to cool down a bit before slicing. I usually have a light snack like a few low carb nuts while dinner is in the oven so I'm not starving while waiting for the meal to be ready.

Eggs are a staple in my diet and they really fill me up. When trying to lose weight, I find eating a lot of eggs seems to speed things along. I put on a few pounds over the winter because I haven't been as active indoors so I'll be making more hard boiled eggs to snack on between meals rather than sweet snacks. What's your favorite way to eat eggs? 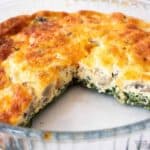 4.72 from 7 votes
This low carb spinach mushroom cheese quiche is quick and easy to prepare when you don't have a lot of time for dinner. Can be made with or without a crust.
Prep Time:5 mins
Cook Time:40 mins
Total Time:45 mins
Course: Main Course
Cuisine: American
Print Pin Review Recipe Save Recipe View Collections
Servings: 6 slices
Calories: 256