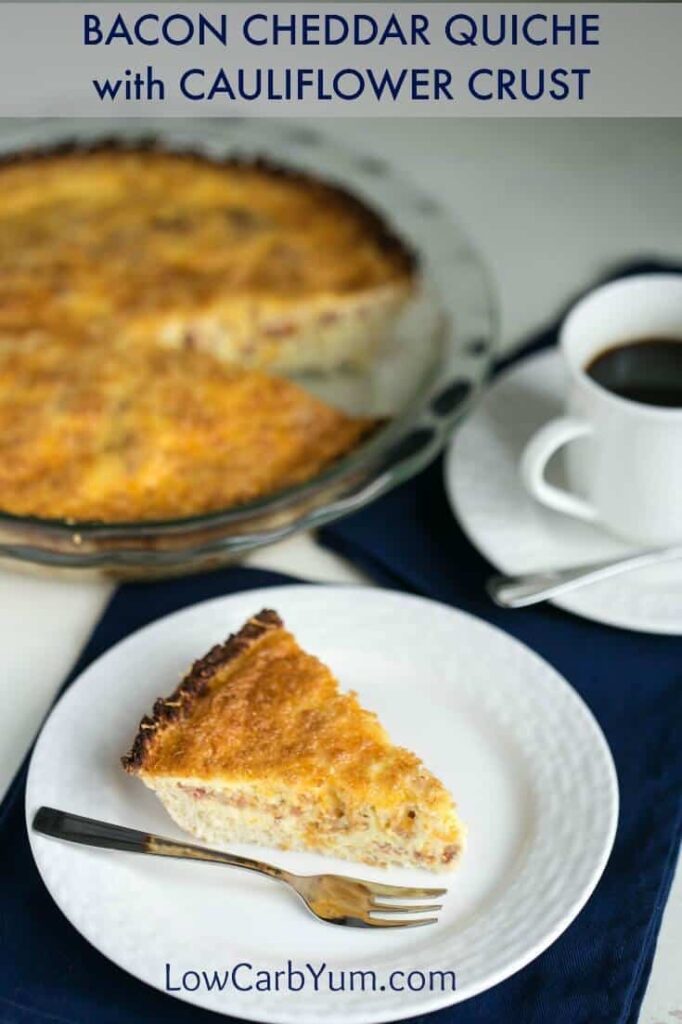 A tasty low carb bacon cheddar quiche that doesn't use any special flour for the crust. Instead, it uses a gluten free cauliflower crust!

I've been using a lot of almond and coconut flour for baking. This past weekend, I was looking for a change when making the crust for a quiche.

Although I sometimes bake a crustless quiche, this time I decided to try a cauliflower crust. It's really the same basic idea as a pizza crust. And, using a vegetable is a nice way to sneak in the veggies.

To ensure the crust wasn't mushy, I squeezed out most of the water from the cauliflower after it was cooked. To do this, I used a cheese cloth. It's impossible to remove all the water, but I did end up getting a lot of it out.

Egg and cheese are what hold the crust together. There's one large egg added and about a half cup of cheese. Similar to the pizza crust, I used a mix of mozzarella and parmesan.

For the filling, I made it a basic bacon and cheese. You can bet this will be what I'll be eating for breakfast most of the week. It's going to be perfect to take along to work.

Since I was using cheese, I decided to go full dairy on this one. So instead of using an alternative milk, I used diluted heavy cream for the egg mixture.

After the bacon cheddar quiche was done, I realized I should have baked the crust longer. Next time, I will bake it until it's golden all over and not just on the edges.

The crust should be a bit crisper. So, you'll want to make sure you keep it in the oven until the top has browned completely. I took mine out too early.

I've also been buying the lower sodium bacon. I found a brand sold in our local Walmart that is low sodium and has no sugar added. Low lower sodium bacon is what I prefer because it doesn't leave me thirsty all day.

For a low carb keto diet, eggs really are one of the best foods you can eat. We go through a ton of eggs each week. Thankfully, my husband and younger daughter love eating them too.

Speaking of eggs, I've been considering doing another egg fast. I don't necessarily need to lose weight, but I'd like to cut back on eating. I seem to eat a lot less when I eat mainly eggs for a week.

You can certainly leave the cauliflower crust off and make a crustless bacon and cheddar quiche. That's probably the best way to go if you are in a low carb induction phase.

If you like quiche, I've got a few other recipes on the site. For those with a strict daily carb intake, you may like the crustless egg fast quiche. Others may prefer the spinach and mushroom quiche.

For those of you who prefer a more traditional style crust, I'd use a savory pie crust similar to the one I used in this key lime pie. You'd just need to omit the sweetener in the crust.

What's your favorite low carb ingredients to add to a quiche? Do prefer it with or without a crust? 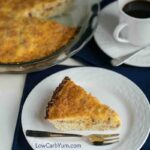 © LowCarbYum.com
Unauthorized use of this material without written permission from Lisa MarcAurele is strictly prohibited unless for personal offline purposes.
Single photos may be used, provided that full credit is given to LowCarbYum.com along with a link back to the original content.
« Coconut Macadamia Breakfast Bars
Homemade Dairy Free Hot Cocoa Mix Recipe »