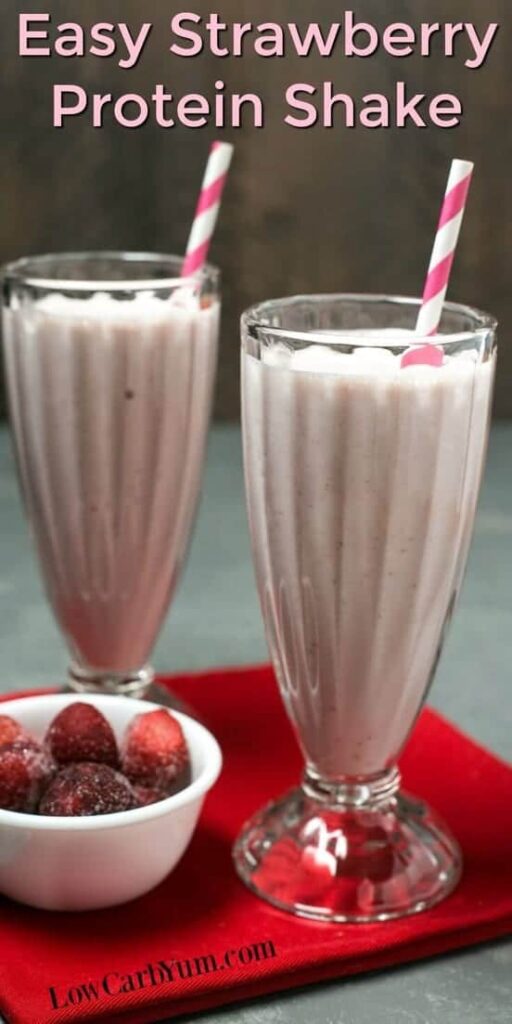 The other night, I didn’t feel like making dinner after work as I wasn’t that hungry. It was a pretty hot day for the fall season, we were over 70 degrees F here in Southern New England.

Ice cream would have been in order, but I didn’t have any low carb or sugar free frozen desserts in the freezer and I didn’t feel like going out shopping. So, I decided to make a strawberry protein shake made with unsweetened almond milk, yogurt and vanilla whey protein.

To get a thick shake, I added a handful of ice cubes to the blender. I like strawberry ice cream and had a bag of frozen strawberries in the freezer so I put in a handful of those as well.

This strawberry protein shake was a very filling dinner. Most regular grocery stores sell almond milk, but I haven’t been able to find any that is unsweetened.

Some of the natural food stores may have it. I bought mine at Whole Foods Market. And, as dairy free milk becomes more popular, it should be available in all local grocery stores.

You can make almond milk yourself from almonds. It’s actually not that hard to do. It just takes time as you’ll need to soak the nuts for a while to soften them.

I don’t shop there that often because the closest store is about 30 miles away. I know others who buy unsweetened almond milk at Trader Joe’s, but the closest TJ’s for me is over an hour away.

One of the local natural food stores in my area just expanded to a new location, but I haven’t checked out their new store yet. There’s a small natural store a couple miles from where I work, but it’s rather small and they don’t carry a lot of fresh food items.

You can also use coconut milk in this protein shake. It does add coconut flavor. Or, you could make a coconut milk strawberry smoothie.

The carbs in this shake are likely lower than stated. It’s because the way carbs are calculated for yogurt aren’t accurate. That’s because the cultures eat most of the sugars.

You can find learn more out about choosing a yogurt lowest in carbs on Livestrong. And, if you’d like to make your own plain Greek yogurt, it’s super simple to do in the Instant Pot. Check out the low carb yogurt recipe. 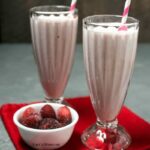