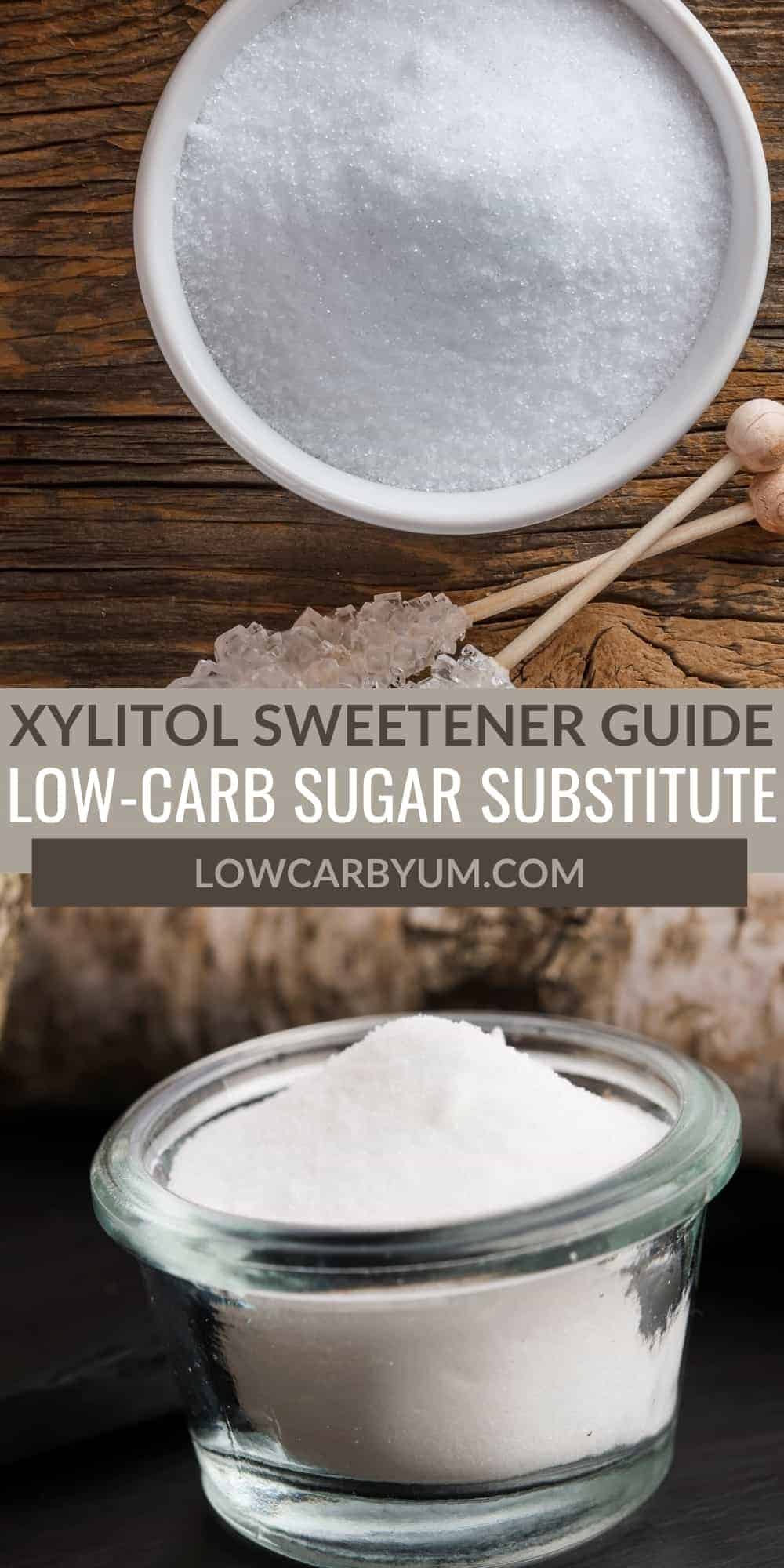 Learn everything you ever needed to know about xylitol sweetener. Is it safe? What are the benefits? All this and more are in this low-carb sugar substitute guide!

There are a ton of different types of low-carb sugar substitutes out there. The choices can feel overwhelming. That's why I am breaking each one down in its own guide. I want to answer all of your questions about each one so you can make the best decision for yourself.

Xylitol sweetener rose to fame when it started claiming its chewing gum can reduce dental plaque. This is a huge claim and has had a lot of controversies. Studies showing that it does affect dental caries to others while others say it's not a medicine and shouldn't be used to treat a disease (cavities). It's a confusing mess.

Cavities aside, there are other reasons that I suggest you choose xylitol last as your sugar substitute.

Keep reading and learn all about this sugar alcohol so you can make your own decision.

Xylitol Sweetener: Everything You Need To Know

Xylitol is actually sugar alcohol that naturally occurs in plant material. If it is all-natural, why is it so controversial for those on the keto diet? Let's look closely at xylitol.

What Is Xylitol Sweetener Made From?

Most xylitol that you might buy or use is extracted from the bark of birch trees. It's also found in fruits and vegetables.

What Are Sugar Alcohols?

You know those sweeteners with the "ol" at the end - those are known as sugar alcohols. Other examples are erythritol and sorbitol. They are made by adding extra hydrogen to the sugar molecules. It's all about chemistry and how our bodies digest them.

Xylitol is a sugar alcohol, so it has that extra hydrogen in it.

How Is Xylitol Used?

It's possible to buy xylitol in powdered form and use it as a sugar substitute. It's most often used in sugar-free things like toothpaste, chewing gum, and even pharmaceuticals.

Xylitol has a cooling sensation when you use it which is why most companies use it in sugar-free products that have a minty taste, such as toothpaste and chewing gum.

There have been a bunch of studies showing the health benefits of xylitol. It hasn't been approved as a medicine to treat disease or health issues, but the studies do show the following benefits:

For humans, xylitol is considered safe by the FDA. However, it is toxic for dogs. If you have dogs, do not let them eat anything that has xylitol in it.

It is safe, but it is also known to give people different side effects, especially if they eat a lot of it at once.

Most of the side effects people experience from xylitol come from consuming large amounts at once.

Xylitol is considered a FODMAP - fermentable oligosaccharides, disaccharides, monosaccharides, and polyols. According to Hopkins Medicine, FODMAPs are "short-chain carbohydrates (sugars) that the small intestine absorbs poorly. Some people experience digestive distress after eating them".

The most common side effects of too much xylitol are digestive issues. This is because the sugar alcohols from it pull water into the intestines or get fermented by the gut bacteria.

Common experiences are bloating, gas, and diarrhea. Most people that experience these side effects will slowly introduce their body to the xylitol and give it time to adjust to it. This helps decrease the severity of the symptoms.

To experience these side effects, you would have to ingest about 30 to 40 grams of xylitol. That is around 2 tablespoons.

Just like xylitol sweetener, erythritol is also found naturally in many fruits and mushrooms. The biggest difference is that erythritol does not have any calories, while xylitol does.

Research has shown that erythritol is actually better for dental health than xylitol. It's also able to be fully absorbed by our bodies - xylitol is not. So, people experience fewer digestive side effects from erythritol.

Another difference is that erythritol isn't as sweet. It is only about 70% as sweet as sugar so it's not a one-for-one sugar substitute.

Stevia is derived from a plant native to South America called the Stevia rebaudiana plant. The kind we find in stores in America is highly processed to make it safer and easier to digest.

Stevia is calorie-free. It also has a licorice flavor, so it isn't used very often in baking, especially in foods that won't cover up that flavor very well.

They are both sweet, but xylitol has a different taste. It has a cooling effect, which is why it is used in toothpaste and mints.

How To Use Xylitol

If you are on the keto diet, I suggest using any other sugar substitute besides xylitol sweetener. Since it has a small number of calories and carbs, it isn't the best idea for anyone trying to limit their carb intake.

The Best Recipes That Use Xylitol Sweetener

I do not recommend using xylitol as your sugar substitute of choice. But if you want to, the best recipes that use xylitol sugar-free sweeteners are low-carb desserts. Here are a few that you can try: