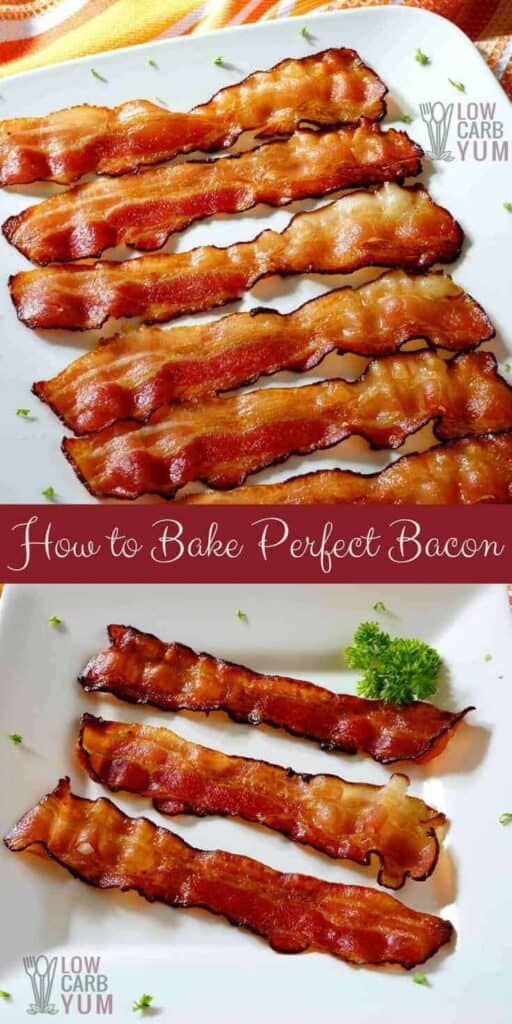 The method for baking bacon in the oven is much easier than frying it up in a pan. With oven baked bacon, the strips come out straight and crispy. Plus, there’s no standing at the stove with grease splattering everywhere!

Why Bake Bacon in the Oven?

Who doesn’t love the delicious taste of freshly crisped bacon? It’s such a great add into recipes like my Bacon Cheeseburger Casserole and my Grilled Cabbage Steaks.

I absolutely hate the mess that results from frying the strips in a pan. It splatters everywhere and it seems I’m cleaning up grease for years after.

And, I end up spending a long time standing at the cooktop when frying. It’s because the whole package never fits in one pan. Or, if I try to squeeze too much in, they all get shriveled.

Baking bacon in the oven solves all these issues!!!

If you have not tried this cooking method, you must give it a try. I guarantee you will never fry bacon again!

Cooking bacon in the oven is so easy and will result in picture perfect strips every time! The best part is that a whole package can be cooked at once without making a greasy mess.

How to Bake Bacon

All you have to do when is to lay the pieces out on a rack in a foil lined rimmed baking sheet. Parchment paper can be used as a liner as well. For the best results, arrange the strips so they aren’t overlapping.

I just use two standard sized rimmed jellyroll pans. Then, I put wire baking cooling racks on top. A full package of bacon fits nicely on the two pans.

The strips are raised up while cooking so it doesn’t get soaked in grease. And, you don’t even need to flip the strips.

It’s best to bake bacon between 375°F and 425°F. But a temperature of 350°F should work too. It just takes longer to cook with a lower temperature. And for crispy strips, it’s better to go with a higher temperature.

There’s also no need to pre-heat the oven. Of course, it does take a few more minutes to cook in a cold oven. However, the meat does cook as the oven heats up.

How Long to Cook Bacon in the Oven?

To determine how long to bake bacon, the temperature of the oven and the thickness of the strips needs to be considered. But you can use the following times as a guide when baking in a preheated oven.

If the oven is not pre-heated, about 5 minutes should be added to each time range. And thick cut bacon may need to be cooked longer.

Unlike pan frying, the grease doesn’t splatter everywhere while it cooks in the oven. Most, if not all, the grease should drip down into the rimmed sheet pan.

There’s very little cleanup after baking bacon as well. You just have to pour off the grease in the pans and scrub down the racks. Even if using a dishwasher, it’s best to hand wash first.

You will need a good scrubber to wash the rack off. After the initial scrub, it’s best to put everything in the dishwasher because it’s the best way to clean the grease off.

To make cleanup even easier, you can line the pans with aluminum foil and make racks out of foil to lift the strips up. Then, when it’s all done, just toss the used foil in the garbage.

Why Baking is the Best Way to Cook Bacon

Once you give this cooking method a try, you’ll never go back to pan frying. You may even want to have separate baking racks just to use for bacon.

It really doesn’t get much easier than this. And, the strips come out pretty flat and crispy when baking bacon in the oven. To make each one crispier, it’s best to blot up the grease on each strip with a paper towel.

Since learning this method, I use racks to cook anything wrapped in bacon like this chicken tenders recipe. It’s a great way to bake a lot of things instead of frying.

I love that the meat isn’t drowning in the grease. And, there’s less splattering mess as well. So, the food comes out nice and crisp on the outside.

You do need to watch out for fat dripping off the sides of the pan. It may make a greasy and sticky mess on the bottom of the oven. However, having some kind of catch pan underneath if the strips get too close to the edge can help. The other option is to just keep the strips away from the edges.

If you’re on a ketogenic diet, you’ll likely be eating lots of bacon. Some people have actually taken it to the extreme. Take a look at what happens when you eat only bacon for a month!

There’s a ton of recipes that call for cooked bacon. Here’s a few low carb ones:

And I pre-cook bacon in the oven for other recipes like my bacon wrapped egg muffins.

These are the items we used for the recipe: 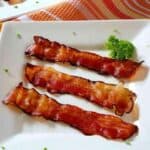 Author: Lisa MarcAurele
4.8 from 5 votes
Cooking bacon on a rack in the oven is much easier than frying it in a pan. This method raises the meat in the pan so the strips aren’t loaded with grease.

There’s no need to preheat the oven first. Just add about 5 minutes to the total baking time if starting to bake in a cold oven. To prevent the grease from smoking when baking, try placing a pan of water on the lower rack. For easier cleanup, skip the baking rack and crumble foil in strips to make a rack. Alternatively, skip the rack all together. The fat collected on the bottom of the pan can be saved and used for cooking.