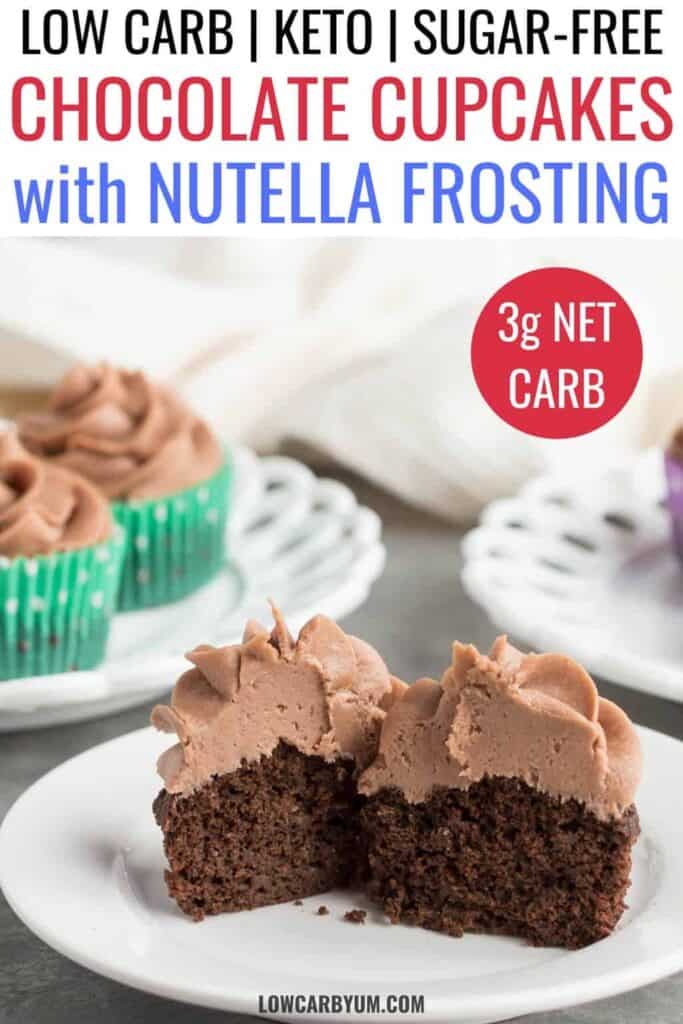 Disclaimer: This post has been sponsored by Pyure, but all opinions are my own.

I’ve been having some cake cravings lately. I’ve been scrolling through too many yummy recipes on Pinterest and probably saw a few too many tasty cakes. It’s tough for me to resist eating more cake than I should so I scaled these down to cupcakes.

My German Chocolate Zucchini Cake recipe was used as a base for these cupcakes. It’s the best chocolate cake recipe I have, but it’s often passed up by those who don’t care for the pecan frosting.

Finely grated zucchini is the secret to making these keto chocolate cupcakes super moist just like my chocolate zucchini muffins. And the addition of hazelnut frosting really makes them extra special.

If you use just coconut flour, a low carb cake can tend to be a little dry. But, adding shredded undrained zucchini ensures you’ll get a moist cake every time.

How to hide the shredded zucchini

I used the fine grate side of my box grater to get the zucchini shredded into tiny pieces. It’s grated so fine that no one will even know there’s zucchini in these cupcakes.

However, processing the batter in a food processor makes it even more undetectable! Or, you can peel the skin off the zucchini before shredding to remove the green color.

I usually don’t bother using cupcake liners because I have a stoneware muffin pan that has been seasoned. However, I had some cute liners in the pantry so I decided to use them for these low carb chocolate cupcakes.

How to make hazelnut frosting

For me, buttercream is the only frosting to put on a cake. Whipped cream based frostings are okay, but using a butter base has much more flavor. Adding the hazelnut spread adds a nice touch.

For the frosting, I used a 100% natural sugar free organic hazelnut chocolate spread from Pyure. If you aren’t watching sugar intake, regular Nutella could be used instead.

For those that don’t like hazelnut or have a nut allergy, you can just top the cupcake with a plain chocolate buttercream frosting.

However, I’m loving the added hazelnut flavor that the frosting adds. Of course, if you are cutting back on sweets, no frosting is always an option too.

If you don’t have the hazelnut spread, you could make your own or just sub in cocoa and a sweetened flavored syrup or a couple drops of a flavored stevia concentrate. You could probably even use a nut or seed butter instead.

I guarantee these will be the best keto chocolate cupcakes you will ever try. They are so good, your kids will never know they have a veggie snuck in. And, they are way healthier than the sugar loaded cakes most kids eat these days.

My family of non-low carbers love these cupcakes. They are perfect for diabetics, too. Most of the sugar-free cake mixes marketed towards diabetics are loaded with food additives and artificial ingredients. But not these low carb cupcakes!

If you’re a chocoholic, you’ll appreciate some of these other delicious snack recipes: 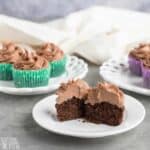 The moisture from the zucchini is needed to prevent a dry cake so do not drain it after shredding.  Processing the batter in a food processor will hide the grated zucchini. Peeling the zucchini is also an option to hide the green color. Using greased silicone cupcake liners is the best way to prevent the cupcakes from sticking to the mold.