Need a new low-carb dessert? Try these healthy chocolate zucchini cookies. They’re a delicious way to sneak in more veggies or use up garden produce.

As I mention in my recipe for baking this veggie into a healthy alternative to potato chips, zucchini are enjoying their moment in the spotlight these days.

Are they on the verge of supplanting kale? Probably not. It seems that kale crunch craziness is here to stay.

But not many gourmands would have likely predicted the ascendancy of courgettes, as they’re called in the U.K.

After all, just a handful of years ago, it seems, the only thing they were good for was grilling. I don’t know about you but I’m not such a big fan of eating them raw.

In fact, just thinking about eating them raw makes me queasy. But as of late, there’s been a surprising transformation of this otherwise bland veggie.

Not only can it be a delicious chip, it’s also a great low-starch pasta alternative. It can sub for spaghetti, lasagna, and ravioli. You can also make a zucchini crustless quiche with this squash-like veggie.

In addition, I’ve seen a recipe for pizza crust with it. And, ingeniously, you can substitute rice for it in sushi rolls. Clever, right?

And who can forget zucchini bread and zucchini fries? OK, those one have been around for a while.

But healthy chocolate zucchini cookies? This recipe is relatively new. At least in my recipe book.

I’ll show you how to make it momentarily. First, though, let’s compare apples and oranges. Or, more accurately, cookies and cookies.

An average regular chocolate chip cookie contains 30 grams of carbs, 18 of them from sugar. In comparison, there’s only at most a few net grams of carbs in one of my treats.

So how can you make a chocolate chip cookie healthy?

The secret to making delicious but low glycemic index (and load) treats is to start with a healthy baking flour. For this recipe, I’m using both almond flour and coconut flour, both of which are prominently featured in Paleo-friendly treats.

What’s the difference between the two? Almond flour is much higher in fat, which is beneficial if you’re following a keto diet.

But how do they differ in terms of baking quality?

Coconut flour is much more absorbent than almond flour. Therefore, if a recipe has lots of liquidy and water-based ingredients, coconut flour helps suck up that moisture.

If I just use almond flour in these healthy chocolate zucchini cookies, they’ll turn out too crumbly and dry.  For this reason, I like to use both of these Paleo-friendly flours.

(If you’re not strict about net grams of carbs you can use raw honey.)

For the recipe, you’ll need just one cup of zucchini, either grated or shredded.

If using cacao powder or unsweetened cocoa powder, one-quarter cup will do.

In addition, I use one-half teaspoon of salt; a quarter-teaspoon cinnamon; one-third cup ghee (clarified butter); one-half cup of golden low carb sweetener such as Monk fruit Extract; one large egg yolk; a teaspoon of vanilla extract and a quarter-cup of unsweetened chocolate chip cookies.

The first thing you need to do is grate or shred the zucchini. After that, to suck out the moisture from the veggie, wrap the pieces in a towel, and squeeze out all the remaining liquid.

While preparing the other ingredients, you can leave the pieces wrapped in the towel.

Next, in a small mixing bowl, combine the two Paleo-friendly flours, along with the cacao powder, baking soda, salt and cinnamon (photos 1-4). Set the bowl aside for now.

Now what you’ll want to do is melt the ghee (photo 5). You can also use coconut oil if you don’t like ghee. Do so in a large mixing bowl. Now take the golden sweetener and whisk it in with the melted coconut oil or ghee (photos 6 & 7).

From here, you’ll want to whisk in the egg yolk and vanilla extract (photos 8 & 9). After that, remove the zucchini from the towel. Add it now to the sweetened mixture (photos 10 &11).

Next, add the dry ingredients to the sweetened mix and stir (photos 12-13). If you’re using dark chocolate pieces instead of the chocolate chips, fold the pieces in (photo 14).

Only two more steps to go….

Hand roll the dough into 1 tablespoon-sized balls (photo 15). You’ll also want to flatten each ball out and top each with a few pieces of chocolate if you want (photos 16 & 17).

Oh yeah, there’s one last step: enjoy! I think they go perfect with a tall glass of low carb milk.

And if you want more healthy cookie recipes, you’ll find others in my keto snacks category here on low carb yum.

We hope you enjoy these delicious zucchini cookies! If you do try the recipe, be sure to let us know what you think in the comments below. 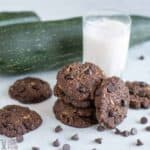 Recipe makes approximately 2 dozen cookies with each serving being 2 cookies. When measuring the grated zucchini, it’s pressed down gently but not tightly compacted. We prefer using a mix of almond and coconut flours. However, all almond flour will likely work as well. For an all coconut flour cookies, other changes are needed. The chocolate chips can be replaced with chopped nuts if desired. 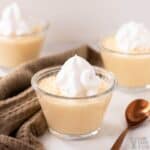 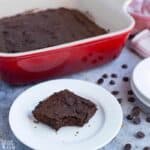 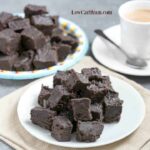 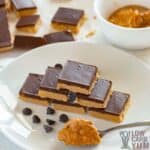