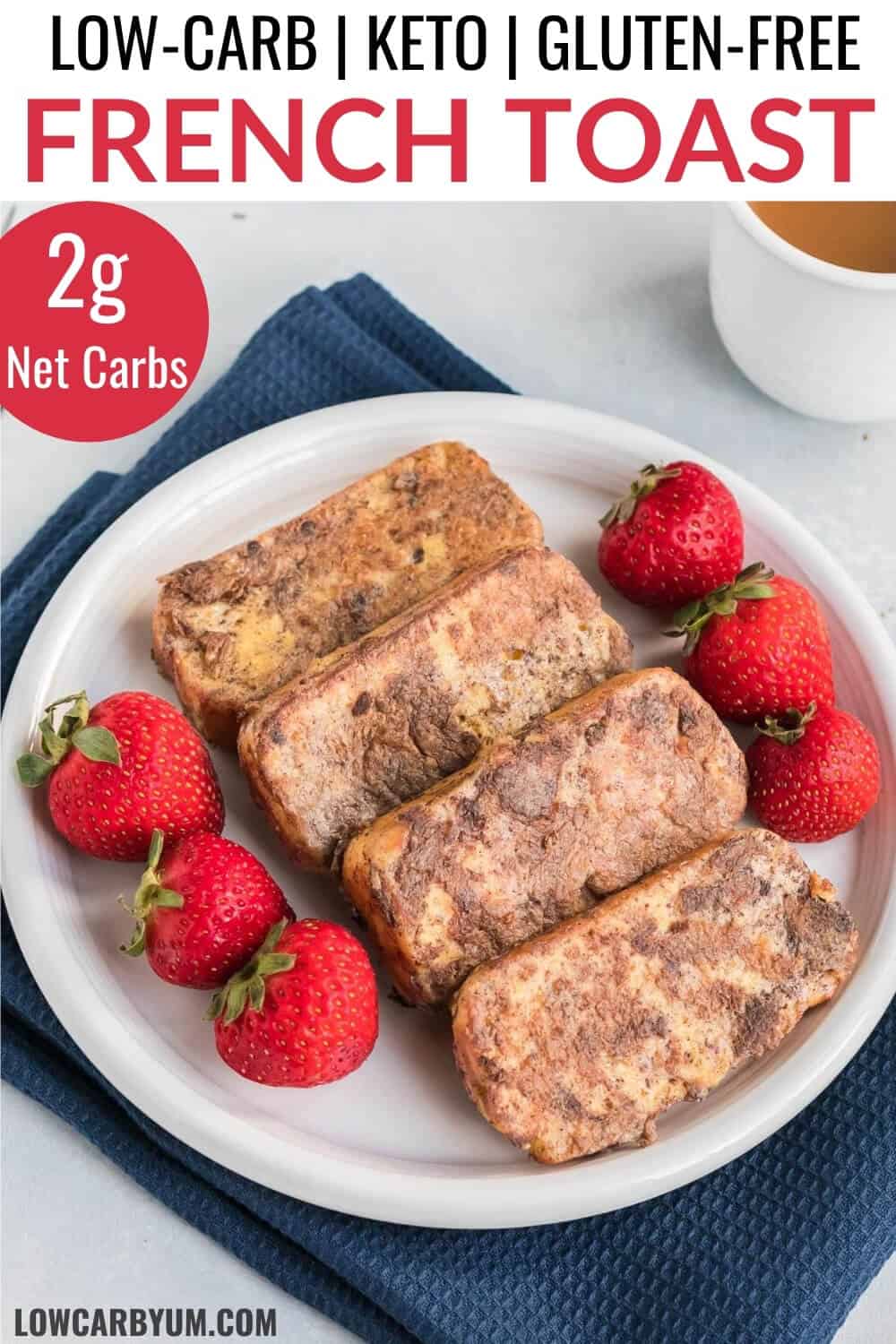 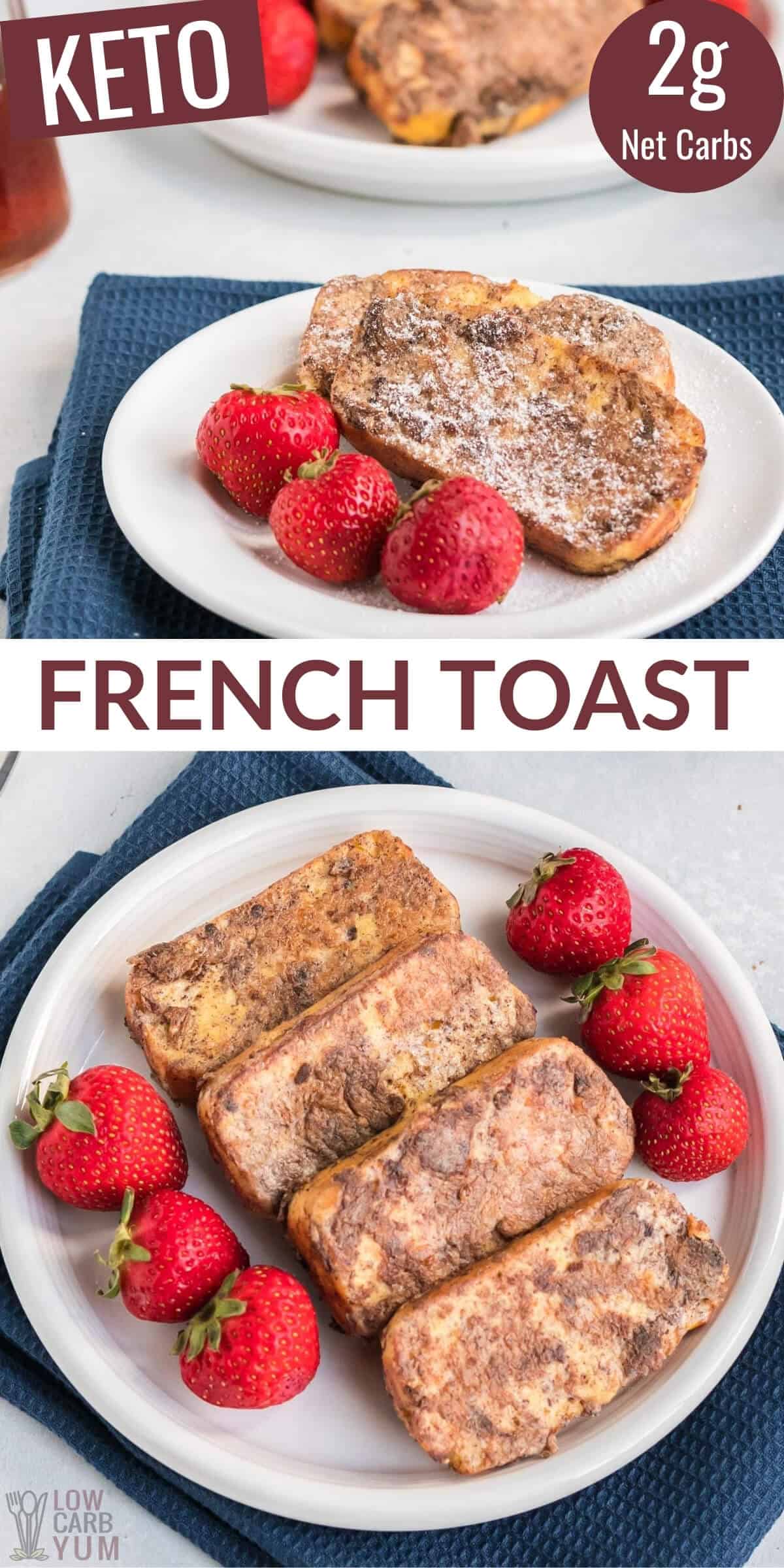 Look no further than this easy low-carb keto french toast recipe for a kid-friendly breakfast. You can even make ahead in sticks or slices and freeze for quick morning meals before school or work.

Since I don't have any time to cook breakfast on work days, I like to cook at least one special morning meal on the weekend. A family favorite is cinnamon french toast made with my simple low-carb bread recipe.

The savory quick bread holds together well when sliced. And, it isn't soft like many store bought white breads.

I was able to cut the bread into regular half inch slices instead of the thicker one inch slices. But thicker slices can be used if you prefer the Texas style.

You can even cut each slice in half lengthwise for keto french toast sticks! The kids really like the sticks so they can dip them.

When I have time, I like to make a double batch to have plenty to freeze for later. It's super convenient when I need to get breakfast on the table quickly on busy mornings.

The best part of the recipe is that it's make with only a handful of simple ingredients.

The key to cutting carbs in the recipe is to replace the bread with a low-carb alternative. It's best to make your own bread. Even a quick keto mug muffin will do.

Once you have your bread, there's just a few simple steps needed to make the keto french toast.

That's all there is to it! If your bread is already made, it should take no longer than 15 minutes. Then you can relax and enjoy your delicious morning treat.

The keto french toast tastes great hot off the griddle or pan. But if you like a little sweetness, dust on some powdered sweetener or pour on your favorite pancake syrup.

For the least impacting keto maple syrup, try Walden Farms pancake syrup. It's not only zero carb, it's calorie free too!

You can also top the toast with fresh berries. Or pour on some homemade sugar-free blueberry syrup or keto strawberry sauce.

Since this recipe tastes like the real thing, it's perfect for the whole family!

My kids prefer to have this low carb french toast made in sticks versus slices. That's because they can eat it with their hands. And they prefer to dunk the bread into the sugar-free maple syrup!

The bread slices are already rectangular because it's a short loaf. So you'll just need to cut them into thicker slices then cut in half lengthwise.

Cloud bread is a great option for the keto bread. It's also very low in carbs.

Leftovers can be stored inside an airtight container in the refrigerator for up to a week. For longer storage, place them in sealed containers in the freezer for up to 3 months.

To reheat, place slices in a toaster on desired setting. Or place in the microwave for 30 to 90 seconds. You can also place them in the oven at 400°F for about 4 to 6 minutes.

If you'd rather have pancakes, I have a terrific keto-friendly ones. My favorites are almond flour pancakes and coconut flour pancakes.

But if you have some homemade bread slices available, I'd go for this french toast recipe. It makes a cozy breakfast for weekend mornings. 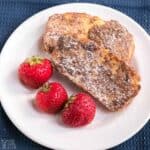 Bread can be cut into thicker slices for Texas style. Each slice can also be cut in half lengthwise for french toast sticks.