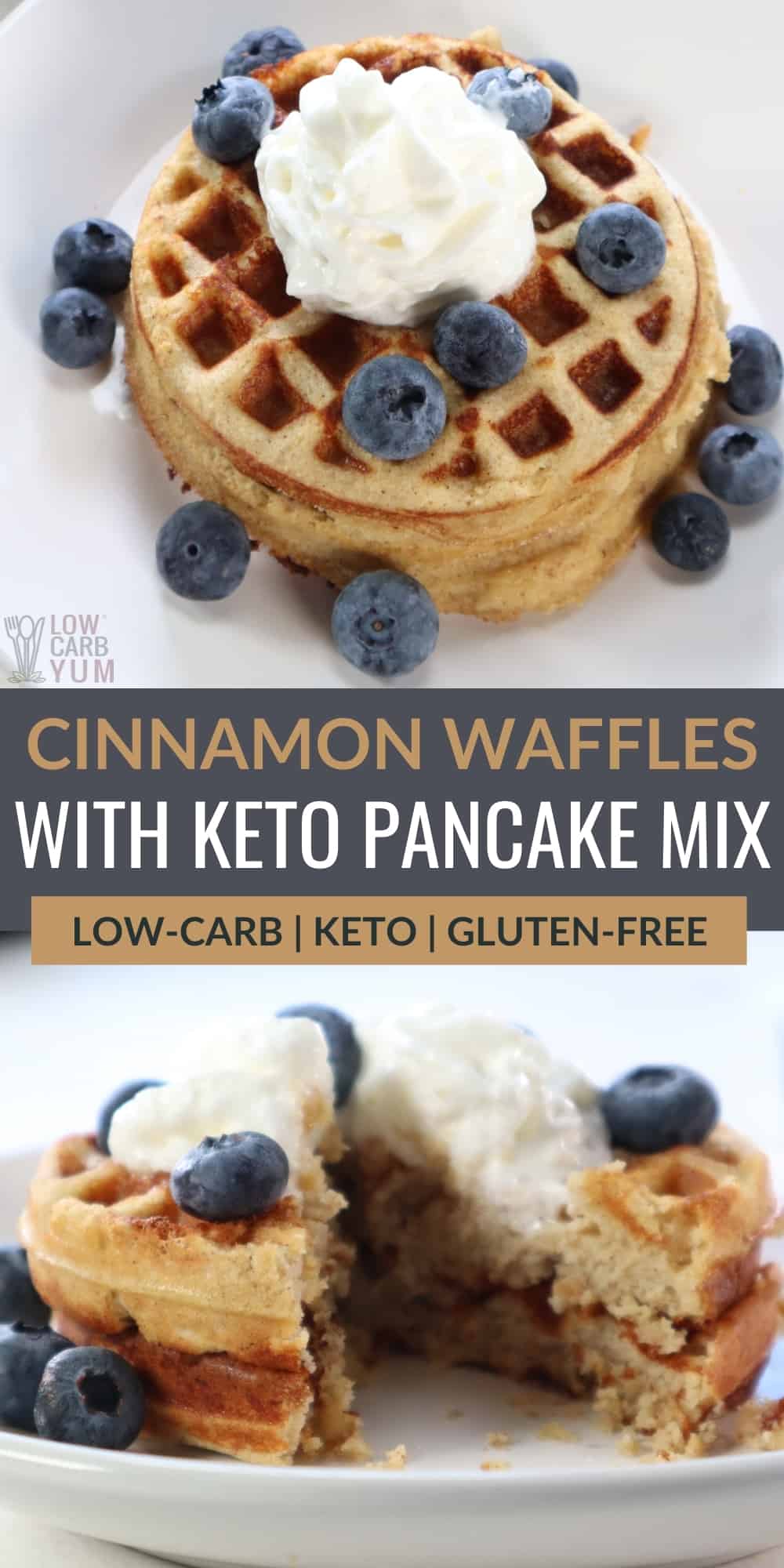 These cinnamon keto waffles are a delicious way to enjoy your keto-friendly breakfast. They are light, fluffy, and filled with flavorful cinnamon that warms you up from the inside.

There's a great way of satisfying your waffle cravings without being too carb-heavy. So delicious, no one would ever guess they were keto-friendly!

These low-carb waffles are an amazingly easy breakfast that can be made before you head off to work. So, make a batch of these tasty cinnamon keto waffles to get your day started off on the right foot.

These cinnamon keto waffles are much like any other kind of keto waffles. They are simple to make and can be ready to eat in under an hour. All you need is five simple ingredients that you probably already have in your kitchen.

Here's what you need:

Heavy cream is keto-friendly and allows for the waffle batter to have some fluff to your waffles.

This ingredient is the essence of this keto waffles recipe and is super low-carb. Don't skip it!

The foundation of the recipe, this pancake mix, will keep the process short and your waffles low-carb.

You can use any low-carb sweetener that you enjoy. Check out this post packed full of options for keto sweeteners. Maybe you'll find your favorite!

Please Note: Check out the recipe card at the bottom for a full list of ingredients used to make this low-carb recipe.

How To Make Keto Cinnamon Waffles

Making these tasty cinnamon keto waffles is as simple as making any other kind of waffle recipe. Only these are entirely keto-friendly and low in carbs!

For the full list of instructions, scroll to the recipe card at the bottom of this post.

Before you begin anything else, plug in your waffle maker and start heating it up. This way, it will be nice and hot when your waffle batter is ready to go inside.

Once your waffle batter is made and the waffle maker has heated up completely, you can pour in your first waffle.

Tip: Have a plate nearby to put the cooked waffles onto, and make sure not to leave the waffle maker. It is too easy to forget about it and burn your waffles.

What To Serve With Low-Carb Waffles

These keto waffles can be served as their own main course topped with whipped cream, keto maple syrup, and fresh berries. Or, you can pair them with eggs and bacon or a breakfast casserole.

These waffles can easily be dressed up or down with your favorite kinds of keto-friendly toppings, like these sugar-free chocolate chips from ChocZero.

They also go great with a cup of bulletproof coffee or tea!

Before we get to the recipe card, here are some questions people often ask about keto waffles.

What’s the difference between waffles and chaffles?

While waffles are typically made with ingredients like flour, baking powder, and eggs, chaffles are made with eggs and cheese, which creates a savory and crunchy waffle.

If you want to try making chaffles for yourself, you can try my recipe for keto chaffles! You can even add sweetener and cinnamon.

Is cinnamon considered a keto-friendly spice?

Cinnamon is a very keto-friendly spice because it helps to lower the blood sugar level while containing less than a gram of net carbs per teaspoon. It is a great spice to use in your sweet keto recipes.

Can I freeze these keto waffles?

You definitely can freeze this waffle recipe for later!

Make sure to completely seal the cooked waffles in an airtight bag or container, and they will last up to 3 months. When you are ready to eat them, allow them to thaw and heat them up before eating. You can also microwave them right from frozen.

How long will keto waffles last in the fridge?

If stored in an airtight container, waffles should last in the fridge for 2-3 days. If they feel kind of stiff and dry, try warming them up in the microwave for a few seconds. Or, you could briefly toast them in the toaster.

These low-carb waffles are the perfect treat to enjoy on a lazy Sunday morning or when you are craving sweet breakfast food. They are just as sweet and fluffy as any waffle recipe and will leave you feeling full and ready to start your day.

Not to mention the tasty addition of flavorful cinnamon, which makes these waffles just a bit more special than others!

Other Breakfast Recipes to Try

If you enjoyed these cinnamon keto waffles, here are some more breakfasts you should try next. They are just as filling! 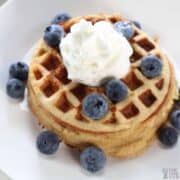 When you are mixing your ingredients, be mindful of overmixing. Mixing too vigorously or too much will result in chewy waffles. Try to avoid opening your waffle maker until it shows that it is done. If you lift the lid too early, you could risk ripping the waffle in half. When the steam slows or stops is usually a good indication that's it's cooked. You may not need as many waffles as you could make, but don't waste the batter. You can always save those extra waffles for later in the week or freeze them. They should keep for at least 3 months in the freezer. In the refrigerator, they keep for only a few days.