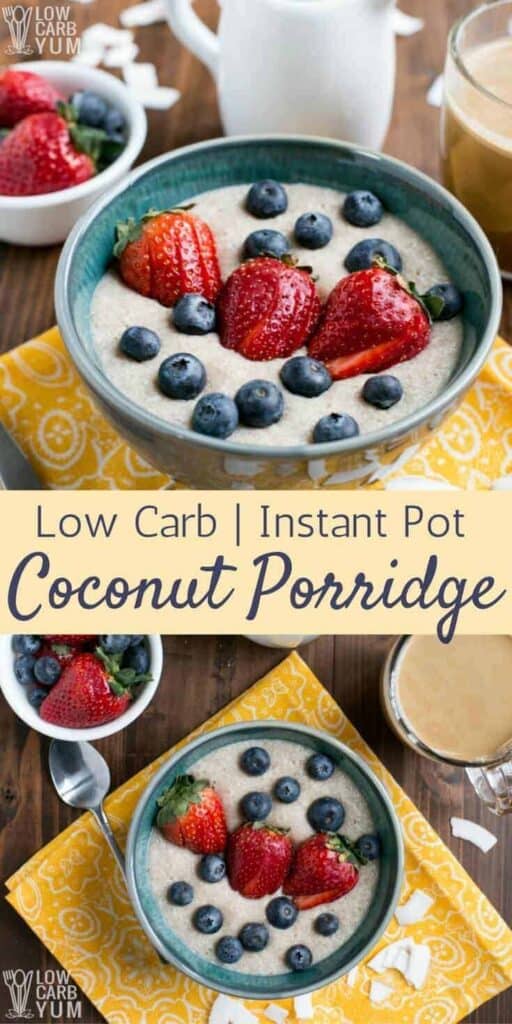 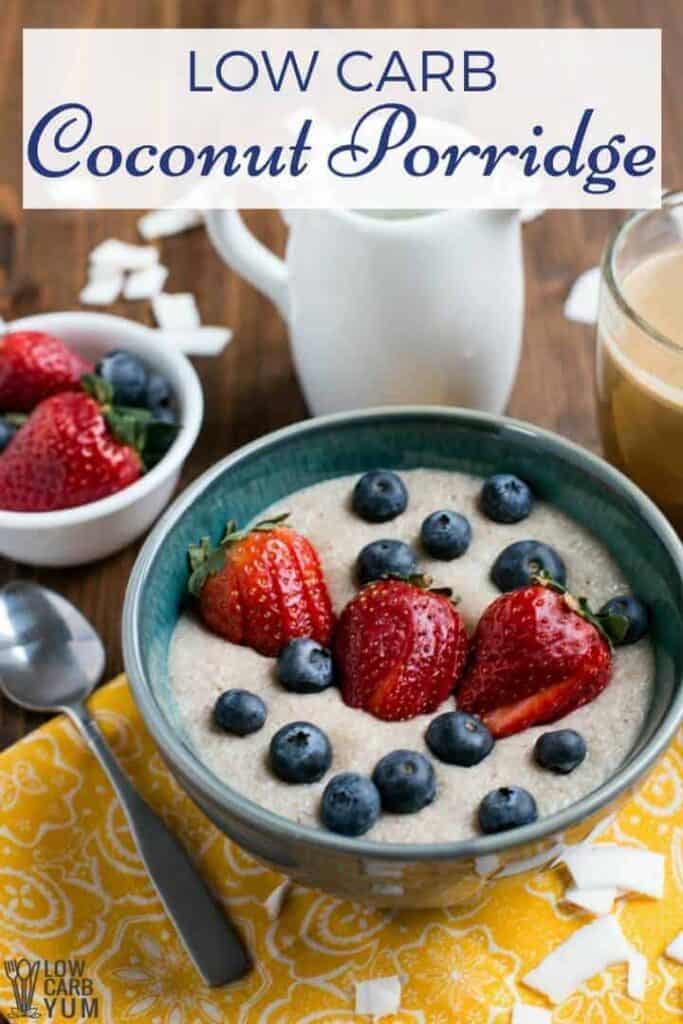 Need a healthy breakfast? A high fiber coconut flour porridge that's easy to make on the stovetop or in an electric pressure cooker. It's a perfect hot keto cereal!

It's been so chilly in the morning here in Southern New England. That's why I decided to rework my low carb oatmeal recipe.

Although I named that recipe "oatmeal", it really should be called "no-oatmeal" since there's no actual oatmeal in it. It's actually a mock oatmeal cereal made with coconut!

This low carb porridge recipe is a modified version of the no-oatmeal hot cereal. I added in some spices and cooked the mix in the Instant Pot.

If you look at the macro data, the carbs in the cereal do seem high. But, most of those carbs are from fiber so the net carb count per serving is only five grams.

The complete list of ingredients and amounts are in the printable recipe card at the bottom of this post. First, I'm going to share some additional information about these ingredients.

Most importantly, when you buy the shredded coconut, make sure you get the unsweetened variety. It's really easy to pick up a bag that is lightly sweetened - but that will add to the carb amounts and might even kick you out of ketosis.

The psyllium husks help the porridge to thicken. It doesn't add very many carbs to the overall recipe.

Then, I added some spices and a bit of sweetener to help it tastes like your favorite maple-cinnamon oatmeal.

How To Make Coconut Keto Porridge

I have instructions in the printable recipe card that explain how to make this recipe either in the Instant Pot or on the stove.

For both options, the process is very similar. Toast the shredded coconut first.

Then, stir in the coconut milk and water and bring it to a boil. This part of the process is different in the Instant Pot because you will set it on high pressure for zero minutes (that's all the time it takes to boil the liquids) and natural pressure release for 10 minutes.

After the porridge boils, stir in the spices and the sweetener.

It's ready to eat!

What To Serve With Coconut Flour Porridge

This recipe has 6 grams net carbs in each serving. It's a really filling breakfast idea, you don't need much with it.

It would taste amazing with a small side of scrambled eggs and perhaps a few slices of bacon.

Before we get to the recipe, I want to answer a few questions people have about making homemade porridge.

How do you cut back on the carbs in this porridge?

To cut back on the carbs, you can reduce the amount of psyllium husk used. I add it to make the coconut porridge thick. But, if you don't mind a thinner cereal, you can use a smaller amount.

I've always liked my hot cereal on the thick side so that's what you'll get using the full amount of psyllium. If you prefer, you could use another thickener like flax meal or chia seeds.

Can you add fruit to hot cereal?

Although you can add in some fruit, I usually just eat it plain. I do sweeten the porridge with some stevia and monk fruit drops to give it a better flavor.

Keep in mind that if you add fruit, you will be adding more carbs to the overall recipe. That's why I prefer to use a sugar-free sweetener instead.

Can you make Instant Pot porridge on the stove?

Don't have an Instant Pot or another electric pressure cooker? No worries. I've also included directions for making this coconut porridge on the stovetop.

In fact, the recipe is a lot quicker to make on the stove than in the Instant Pot since you don't have to wait for the pressure to be released or for it to come to pressure.

What are some flavor ideas for this coconut porridge?

The reason I added in some vanilla extract, cinnamon, and nutmeg is because a reader commented that it made my no-oatmeal cereal taste better. And that same reader stirred in low carb maple flavored syrup.

If you want some maple flavoring in this low carb porridge, you can add in a little maple extract in with the vanilla extract. I do like maple flavor so I'm going to try that next time.

How do I make a cold low-carb cereal?

For those that prefer a cold low carb cereal, I've got an easy muesli cereal recipe that's quick to make. I do bake it like granola just because I find it gives the cereal a better crunch.

Can you make porridge with almond flour?

Yes, you can make porridge with almond flour, you just have to use a different amount of liquid ingredients. My friend Kim has a fantastic recipe for an almond flour version if you aren't into coconut.

I enjoy eating hot cereal so this low carb porridge really hit the spot on these cold winter mornings. And, I like that I can pre-make it and just heat up a serving in the microwave.

If you enjoyed this coconut flour porridge, then you will enjoy some more of my low-carb breakfast recipes. These are some of my favorites:

Psyllium powder can be used, but the amount will be different. Typically only half as much powder is needed if replacing whole husks.  Coconut flour is used as a thickener in the recipe. The amount needed may vary as the absorbency of the flour isn't always the same.