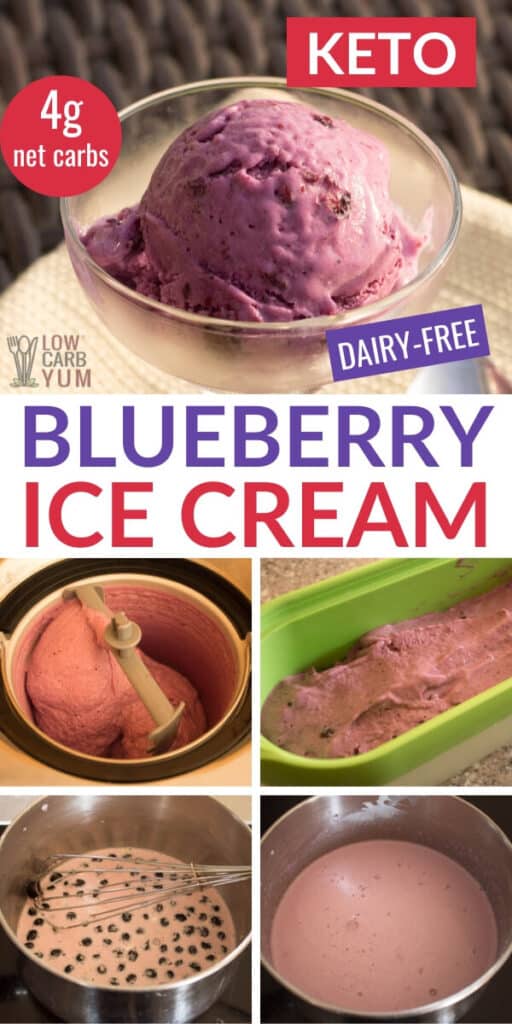 Enjoy a scoop of this dairy-free blueberry ice cream to cool off on hot summer days. It’s a low-carb sweet snack made with coconut cream.

As I’ve been trying to move to a more Paleo diet, it’s been hard to cut back on dairy. That’s the one thing that keeps me from being a true Paleo eater.

I just can’t give up my dairy! With that said, it’s probably best for me to stick with the Primal diet which doesn’t restrict dairy the way Paleo does.

Of course the move to dairy-free would be much easier if I actually had a problem with dairy, but I don’t. However, my experience with Egg Fasts seems to suggest that I am sensitive to heavy cream because consuming it causes me to gain weight or stall weight loss.

I used one full can of LC Foods Coconut Cream in this blueberry ice cream and it came out with a creamy texture just like dairy ice cream. I doubt that anyone would guess that this ice cream contains no dairy.

It is nearly impossible to find coconut cream in regular grocery stores. It may be available in natural food stores and Asian markets. I have been ordering it directly from LC Foods.

My husband likes to take the kids blueberry picking at his friend’s house over the summer when the fruit is in season. They typically come back with 50 pounds of blueberries or more.

Although I prefer eating the blueberries fresh, I end up freezing more than half because we just can’t eat that many before they begin to spoil. I also try not to eat too many blueberries at once because the carbs do add up.

I’ve been wanting to make a blueberry ice cream for a while now. I decided to make this sugar and dairy free because I had ingredients from another recipe that I needed to use up.

I  thought about adding unsweetened coconut flakes to the ice cream, but chose not too because the coconut cream provides enough coconut flavor by itself. Coconut ice cream is another favorite if mine that I grew fond of after trying it at a Chinese restaurant.

This low-carb dairy-free frozen treat is a welcome treat for hot summer days. It does taste a little like sorbet or sherbet because it has so much fruit in it.

You can bet that I’ll be making this blueberry ice cream recipe again as we always have tons of blueberries in our freezer.

Other recipes to try

If you love berries as much as I do, you’ll want to try some of my other fruity low-carb dessert recipes. Below are just a few of my favorites: