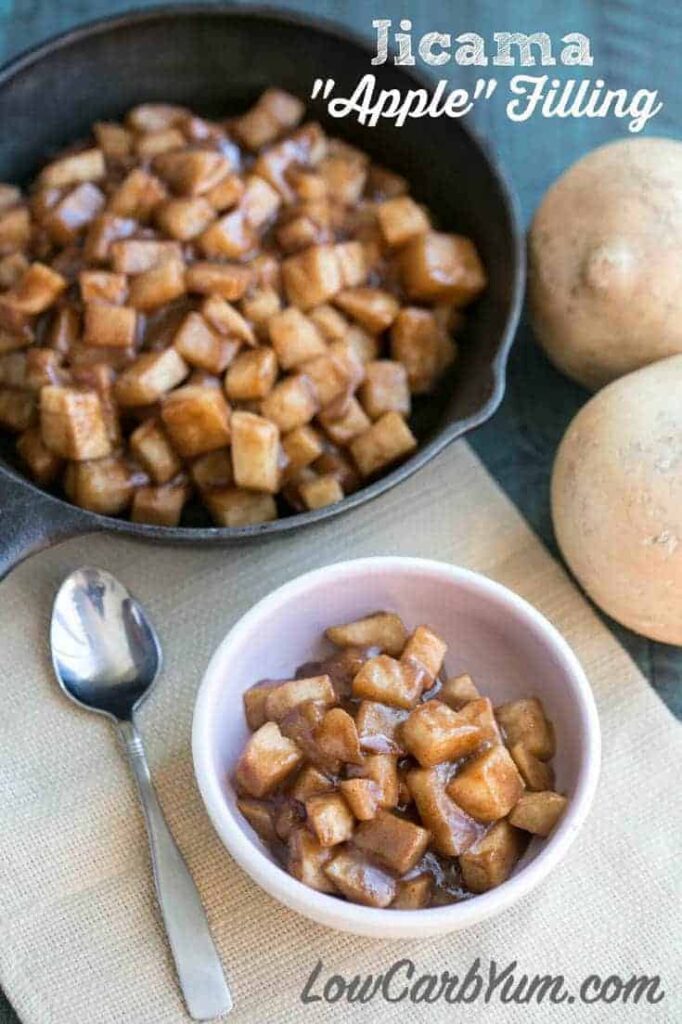 A lot of recipes call for apple pie filling, which isn't low carb. You can use a jicama apple filling instead which is much lower in carbohydrates.

I've been wanting to try jicama for a while. But, it hasn't been available in any of the local grocery stores.

A few weeks ago, I got sick and wanted to try a holistic approach to healing.

It was a Sunday and the local natural food that I typically go to was closed. So, I ended up taking a drive to Whole Foods market which is somewhat far for me.

Well, I'm so glad I made the trip to Whole Foods because not only did I find jicama, but I found a lot of other great food that the local stores don't carry. I'll be taking the drive more often now.

My initial thought was to try making a pie or tart with the jicama. That didn't happen because I got really busy.

I ended up making a jicama apple filling that I could store in the refrigerator or freezer for later.

Since I didn't have time to make an apple pastry before the jicama began to spoil, I figured I'd make the filling and try it in a pie, tart, or other pastry later.

Of course, you can always use zucchini or chayote squash in this recipe if you don't have jicama. In the past, I always used zucchini as a low carb mock apple since I could never find the other two.

Well, I was pretty happy when I found chayote squash at my local grocery store. My sister-in-law told me that another grocery store carried jicama, but I never did see it there.

I ended up eating most of this yummy jicama apple filling by itself. In fact, I thought it made a tasty breakfast treat.

Not only can it be used to fill a pastry, but it also is great to mix into yogurt. I used to make a bunch of low carb blueberry syrup just for yogurt!

I've got a few ideas on how I want to use this jicama apple filling. But, since I ate most of the filling before I had time for baking, I'll need to take another trip to Whole Foods to get me some more fresh jicama!

It's hard for me to resist yummy treats sitting in the refrigerator, particularly during the work week!

Although you can freeze this jicama apple filling, I put all of it in the refrigerator. Next time, if I'm too busy for baking, I need to put it in the basement freezer so I won't be tempted to eat it all.

Do you have this problem too? How do you keep from overeating when there's yummy food in the fridge? I like to hide it in our basement refrigerator so it's out of sight.

I have some ideas for what to do with this filling, but it may have to wait until I have more time to experiment.

I'll have to think of some simpler ways to use the jicama apple filling that doesn't require too much time.

I suppose I could top it off with a crispy topping and make an apple crisp. What would you do with this low carb jicama apple filling?

I'm thinking something like a low carb apple danish made with coconut flour Fathead dough might be in order! Or maybe some caramel apple cookies by replacing the chips in keto caramel chocolate chip cookies with this filling.

For more tasty low-carb apple recipes, check out my keto apple bread and keto apple crisp. They both have delicious apple flavor without all the carbs! 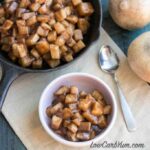 2.7g net carbs per serving
15g erythritol per serving not included in nutritional data (does not impact)