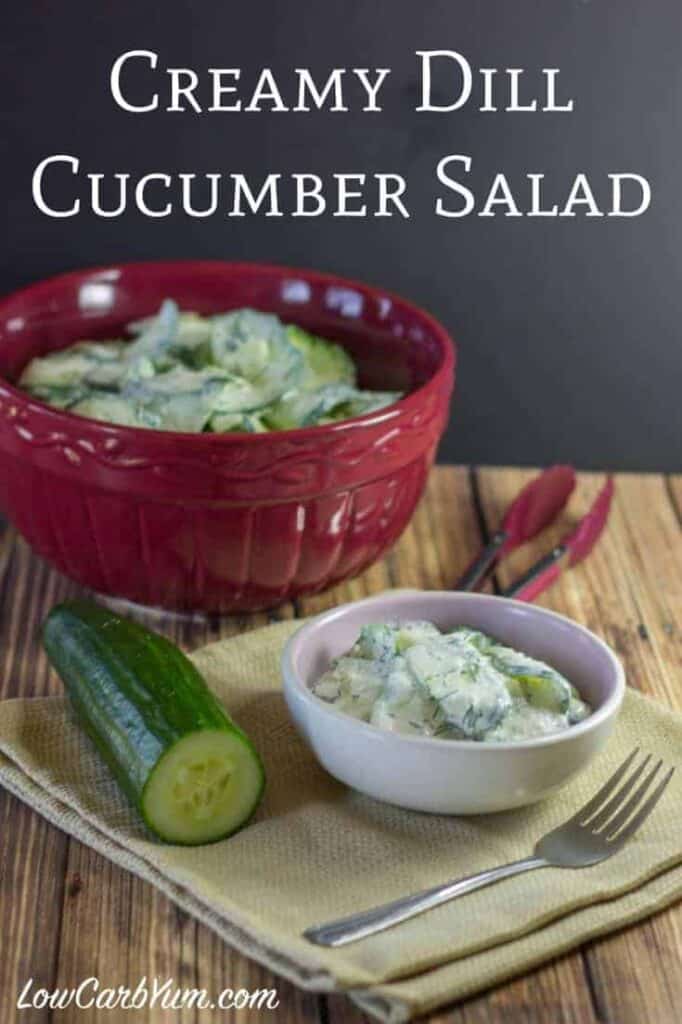 Here’s a creamy dill cucumber salad made with a sour cream and vinegar based dressing. It’s a great way to enjoy your crop of cucumbers on hot summer days.

Last summer we were swimming in cucumbers because my son was part of an Agri-Science program at high school and his senior design project was a hydroponic system for growing cucumbers in a greenhouse. He started all his plants from seed and there must have been a hundred plants.

Many of the plants were sold and we decided to plant all the remaining ones in our backyard. We made a new garden spot just for the extra plants and planted some strawberries plants mixed it that we hope should take over the spot this year.

Most days last summer, I’d be picking 5-6 cucumbers! Since the cucumber season is not that far away now, it’s time to start thinking about ways to enjoy them. I usually make cucumber salad with a regular vinegar and water based dressing, but sometimes I’ll change things up by making a creamy dill cucumber salad recipe.

We usually transfer our plants outside in the garden after Memorial Day because the threat of frost is usually over by then. This year, winter seems to have lingered for a while.

The forsythias just started blooming this week which is really late. Usually, they have already shed the flowers by now. I’m a warm weather person so spring is always my happy point because I finally get to go outside and be comfortable.

Although you can use dried dill in this salad, fresh dill is the best. It does take some time to remove the stalk and chop the dill up, but it’s time well spent. For this creamy dill cucumber salad, I used about 4-5 tablespoons of chopped dill or about half of the bunch.

I normally just slice up the cucumbers when making a salad, but decided to try slicing in thin ribbons using a spiralizer this time. Since the cucumber ribbons were too long, I also chopped them up into more manageable bite size pieces.

Then, I put alternating layers of cucumber and dill in a large bowl so that they would be evenly distributed. I don’t know about you, but I really love the smell of dill. I have no idea why I don’t use it more!

I mixed up the creamy dressing in a separate smaller bowl and then just dumped it on top of the cucumber dill mix. To make sure all the cucumbers were mixed into the dressing, I tossed the salad up a bit with some tongs.

The salad needs to chill for at least four hours in the refrigerator to soak up all the flavors of the dressing. I used unfiltered apple cider vinegar, but you can use any vinegar you prefer. We usually have a lot of outdoor summer parties so I’ll likely be making this creamy dill cucumber salad several times over the next few months. 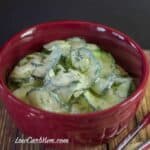 If cucumbers are spiralized into ribbons, they will need to be cut into smaller lengths.